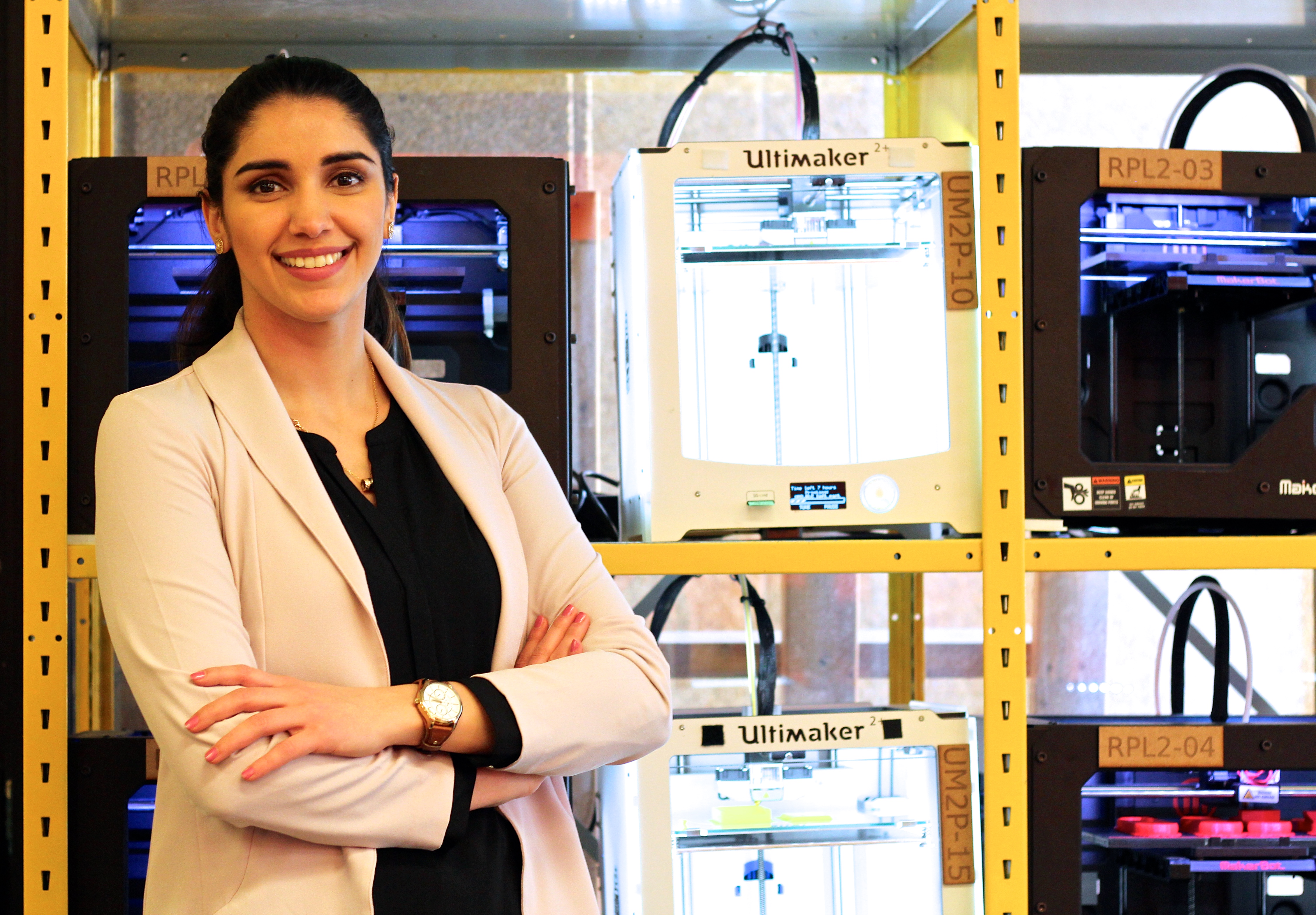 Shikh stands in front of the 3D printers in the University of Ottawa Makerspace.  Photo by Manuela Bárcenas

Midia Shikh’s family emigrated to Canada when she was 17.

Almost a decade later, the young Syrian has helped hundreds of newcomers by leading the Refugee Outreach Programme and is using her engineering knowledge to send accessible prosthetics to war amputees.

As someone who was born and raised in the Middle East, Shikh felt the need to take action and help people affected by the Syrian conflict.

“Deep inside I know that if my family hadn’t left Syria when I was young, it could have been me,” she said. “That’s the truth. I could have lost an arm, been killed or tortured. So that’s a big driver to do what I do.”

Thanks to her family’s decision to move to Canada when she was younger, Shikh had the opportunity to get a health sciences degree in 2014 and a second degree in chemical engineering this year. Her passion to tackle social issues through entrepreneurship and her contributions to refugee healthcare led her to be one of the three Canadians who will travel to the UK to receive the Young Leaders Awards from Queen Elizabeth later this month.

She says she was inspired to make a change in the life of refugees after taking an entrepreneurship class in 2016.

“I met up with some classmates and we talked about how we could use our engineering skills to find a way to help refugees,” she said. “At that time, prosthetics were a big topic in 3D printing so we started looking into them and what we could do.”

This is how Shikh and her co-founders Malik Jumani, Ahmad Al-Abdulmohsen, Olivier Miguel, Roxanne Gauthier-Ferland, and Antoine Machaalani decided to launch Dextra, a social enterprise that sends 3D printed prosthetics to war-amputees and refugees in regions of Africa and the Middle East.

Since March 2016, Dextra has been working at the Makerspace in the University of Ottawa to print and assemble plastic prosthetic hands. The project has been made possible thanks to government grants, scholarships and the goodwill of its creators- who volunteer their time and skills. 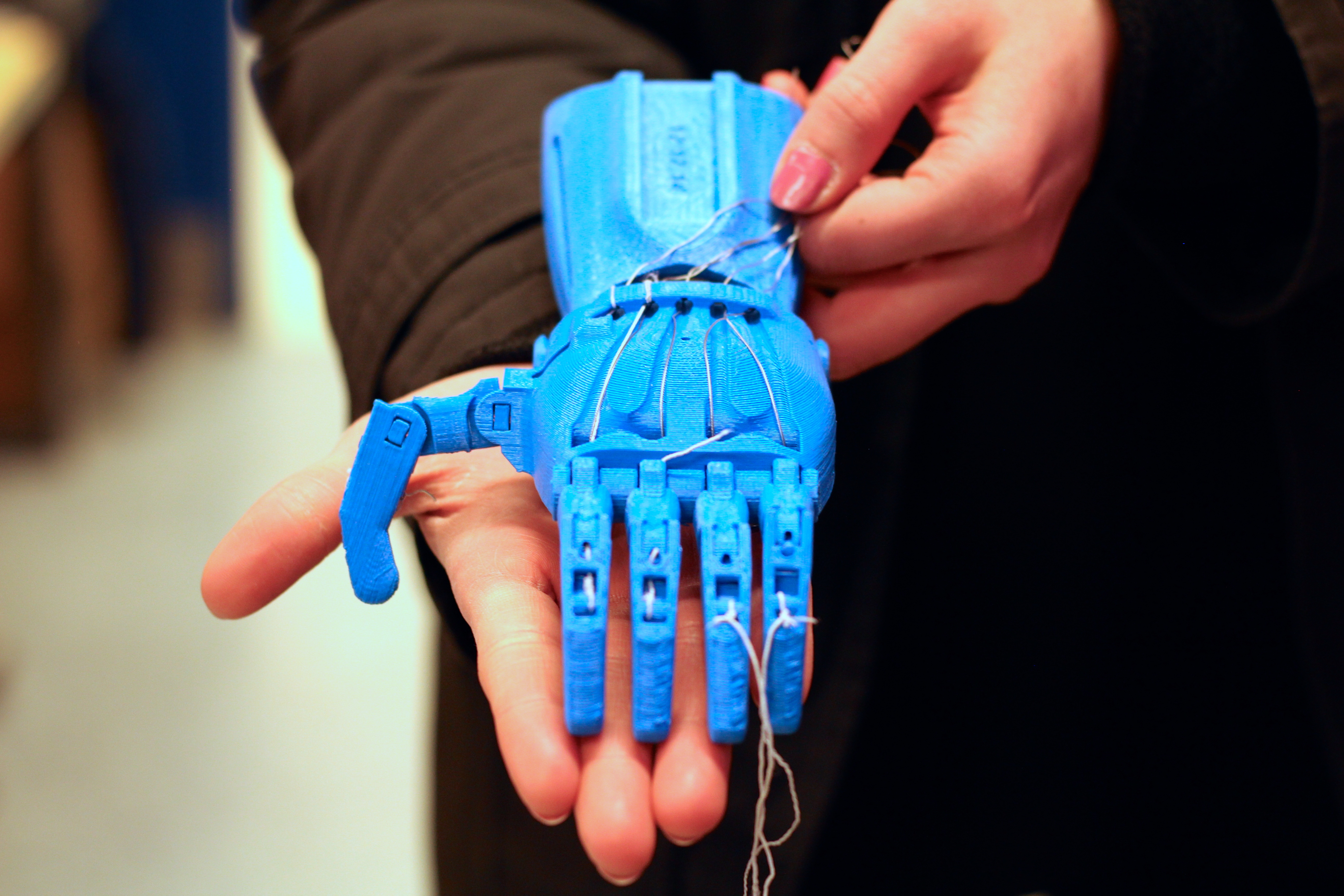 Shikh shows a 3D printed prosthetic after the plastic parts have been assembled.  Photo by Manuela Bárcenas

When lack of accessibility leads to innovation

The World Health Organization estimated that 80 per cent of the individuals who needed a prosthetic device in 2004 lived in developing countries and were not able to afford any type of high-tech prosthetic.

One of these countries was Lebanon, a place where 600,000 refugees had an upper limb amputation in 2016, according to Shikh.

In order to get the prosthetics to the hands of refugees, the Dextra team works with the International Committee of the Red Cross (ICRC). In most cases, Shikh and her team send the designs to Lebanon, where they are modified and delivered by ICRC workers and partner NGOs.

Simple actions with an empowering effect

One of the disadvantages of 3D printed prosthetics is that they are more fragile than high-technology prostheses. According to Ed Lemaire, senior investigator at the Ottawa Hospital Research Institute and president of the International Society for Prosthetics and Orthotics (Canada), plastic prosthetics can easily break when they’re used for actions that require a lot of strength.

“You can’t work at a farm, they wouldn’t stand up to someone who had to do manual labour,” said Lemaire. “A child wouldn’t be able to play in the jungle gym or hold something with a lot of force because they are not built for that.”

However, Shikh argues that with the help of a mechanically-activated hand, refugees who wouldn’t have access to a prothesis could perform actions such as holding a phone, a spoon or a cup. She thinks the ability to perform simple actions like these can help with self-esteem and really make a difference in someone’s life.

According to Shikh, working with people located in a different continent has been one of the biggest challenges in her journey with Dextra. She recounts her experience with an NGO in Morocco as an example of this.

“Someone approached us about the story of a child who’s family could not afford a normal prosthetic, but they knew that 3D printing was a lot cheaper and asked us if we were interested to help,” said Shikh. “The person from the NGO was coming to Canada for two weeks and was hoping to take the prosthetic back to Morocco with him, so we had two weeks notice to build it.”

Shikh tried to collaborate with the people in Morocco by sending them specific measurements and instructional videos of how to take them, so that the team in Canada could build the prothesis.

“I would send him stuff, he would sent it to someone who lives in the village and then that person would go and take the measurements. It was a very challenging process,” said Shikh.

Malik Jumani, one of Dextra’s co-founders, says Shikh’s ability to empathize and communicate with other people has been essential for the success of the project.

“Midia put a lot of emphasis on the mental impact of the physical disability and on staying connected with the family of the kid who is in Morocco. I really liked the way she connected everyone together in this project.” said Jumani

Unfortunately, when the prosthetic hand was sent to Morocco, the measurements were not entirely right.

“The boy was happy to try it on but it didn’t fit perfectly,” said Shikh.

But Shikh hasn’t given up. This summer, she will travel to Morocco to meet the boy who’s prosthetic hand did not fit the first time. She will be taking the measurements herself and establishing partnerships to mobilize the Dextra project to the African country.

“I’m probably going to cry when I see him,” said Shikh. “I think it will be a wake up call to me and to other people involved in the project because not everyone is as fortunate as us, and this is why it’s always good to give back to others.”