By Ash Abraham and Bárbara d’Oro

Genevieve Allen put together her own treatment to combat the effects of lymphedema. [Photo © Ash Abraham]

Every morning for the past 16 years, Genevieve Allen, age 58, has started her day by pulling out a mesh compression sleeve and a yellow rubber glove from a drawer in her bathroom. She scrunches the sleeve up her forearm, and stretches it up over her bicep using the rubber glove for extra grip. If she deters from this carefully orchestrated routine, her arm will swell with liquid and leave her in excruciating pain. She won’t be able to lift her arm or accomplish the most menial of tasks.

There is currently no cure for Allen or the 1 million people living with lymphedema in Canada. If left untreated, the swelling can cause irreversible damage to the swollen tissue, and can lead to infection, chronic pain, disability and mobility issues. But there may be some relief on the horizon. Last year, results of a clinical trial gave patients hope that a new drug for managing the condition may one day be available.

Allen thought the most difficult chapter of her life would be surviving breast cancer, but almost 15 years later, her cancer-free mornings are still a struggle. Doctors never warned Allen that cutting into her lymph nodes would put her at risk for lymphedema.

“You’re going through cancer…you think you’re dying. Then, you’re not dying, but you have this chronic thing,” said Allen.

Some forms of lymphedema can be inherited genetically, but the condition is more common in people who have suffered damage to their lymphatic system through surgery or cancer treatment. Allen’s lymphedema began after a mastectomy and radiation. Lymphedema usually occurs on arms and legs, but can also develop on the chest, back or breast. Allen’s swelling spans from her upper back, down the right side of her body as well as into her right arm. At times the swelling becomes so painful that she can’t complete chores like wiping a kitchen counter. Through her own online research and through connecting with other people with the disease, Allen realized she had lymphedema.

“Doctors tell you all of the horrible side effects of [chemotherapy] drugs, but they don’t tell you this could happen to your body,” said Allen. 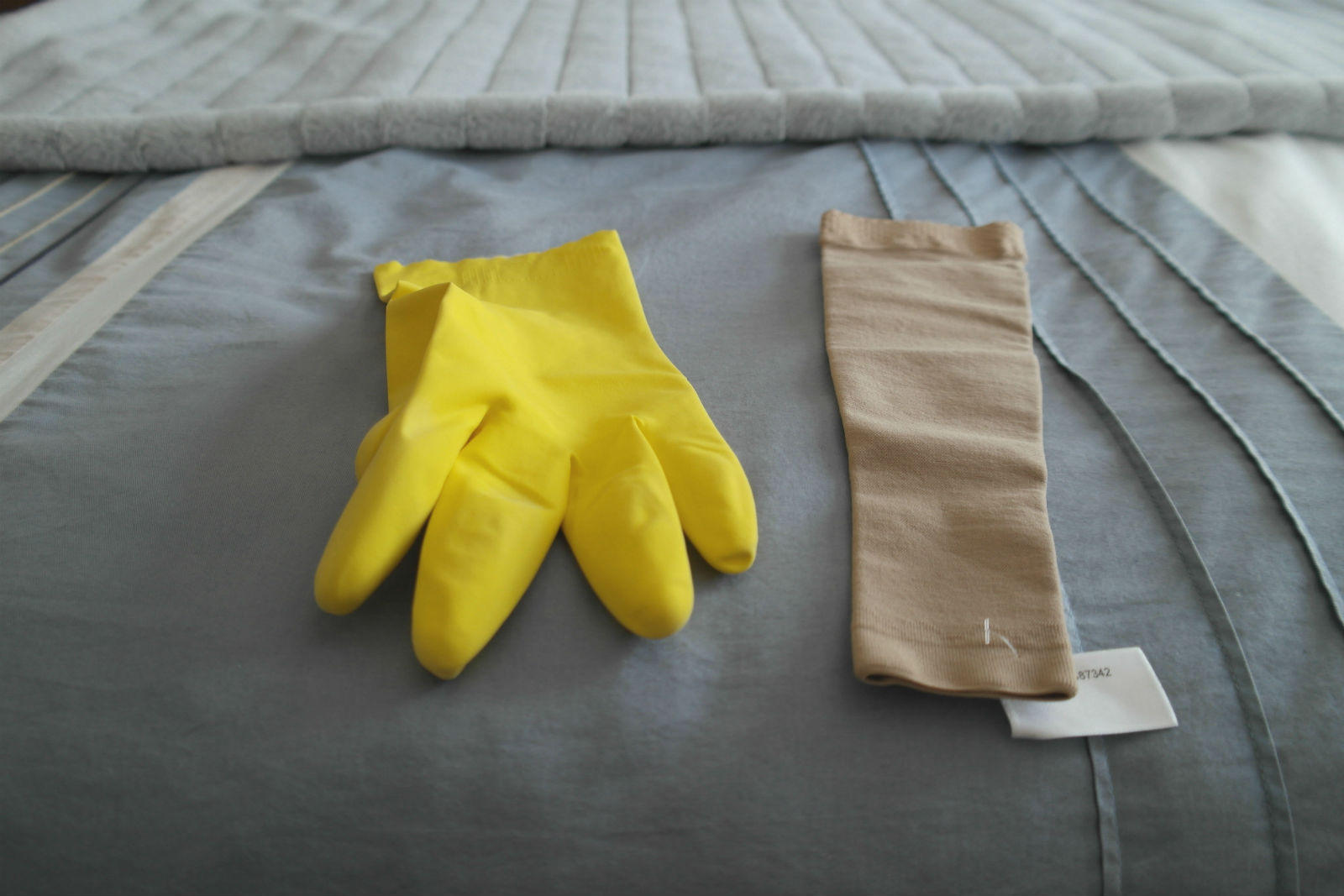 Why do bodies swell?

The extreme swelling seen in lymphedema results from a build-up of lymph fluid underneath the skin.

Lymph is a salty fluid that contains white blood cells. As it flows through the body, the fluid passes through the lymph nodes so that toxins and harmful bacteria can be filtered out. When lymph nodes are damaged, the fluid can build up in tissues. Excess fluid buildup causes swelling, known as edema. Swelling also causes the skin to become tight and thick losing its elasticity.

People may develop lymphedema years after the damage to the lymphatic system occurred. For Allen, the swelling in her arm started six months after 15 lymph nodes were removed from her body. But Allen recalls seeing a friend who developed lymphedema 20 years after undergoing breast cancer treatment.

“Once you have had the surgery and your lymphatic system has been cut into, you are at risk,” said Allen. Creating a space for lymphedema patients to talk is an important part of Thomas’s work. She said that patients feel frustrated when strangers ask about their compression garments.

“They will be getting groceries and the cashier will say: ‘did you do something to your arm”’ so right away the person with lymphedema has to think ‘do I tell them about this condition? Do I tell them it is a result of cancer? Do I really want to tell this person that I have had cancer?’” she explained.

The future of damaged lymphatic systems

Until recently, the only way to manage lymphedema was with compression garments as no drugs were available to treat the effects of lymphedema. Last October, a group of researchers from Stanford University published a paper outlining how an anti-inflammatory drug Ketoprofen, normally used to treat musculoskeletal pain, can restore the elasticity of the skin in lymphedema patients. The paper, published in JCI Insight, a journal of the American Society for Clinical Investigation, reported the results of two clinical trials. The work suggests damaged lymphatic systems are not beyond repair.

Stanley Rockson, a cardiovascular researcher at Stanford, and his colleagues found that lymph fluid builds up because of an inflammatory response to a molecule produced by white blood cells called LTB4. In both animal and human studies, they found that an increase in LTB4 levels blocked the lymphatic system from functioning properly. White blood cells produce LTB4 when inflamed.

Rockson and his team observed how fluid distorted the skin in animals. The skin started to thicken, scar tissue formed and there was an increase in cellular mass.

“Almost always lymphedema passes to a stage that has been historically called irreversible where these tissue structural changes occur. We have had no treatment for that,” said Rockson. “The purpose of this research was to understand the biology of that transition,” he adds, and to find ways to stop it the swelling from happening. That’s where Ketoprofen enters the picture. It is an anti-inflammatory drug that targets the LTB4 molecule, and reduces swelling. The researchers say after about four months on the drug, patients’ skin became less thick and more elastic.

“It seems to be reversing the body’s machinery,” said Rockson.

Although promising, Mark Nicholls, MD, professor of pulmonary and critical care medicine at Stanford, and an author of the paper, cautioned that larger studies are needed to confirm these results beneficial. “People can have different varieties of the disease based on their genes and their environment,” said Nicolls. “Even though everybody in the trial has lymphedema, they may have different subsets, and some subsets may be more responsive to the Ketoprofen.” The next task is trying to identify the patients that are most likely to be strong responders to the drug.

Genevieve Allen speaks about facing her fear of flight while living with lymphedema. [Video © Ash Abraham]

Roanne Thomas works with lymphedema patients and is Canada’s Research Chair in Creative Practices and Well-being. Although she wasn’t a part of the study, she thinks the research is an exciting new development.

“The treatment looks very promising, but as noted, this medication is about disease management. It’s not a cure for lymphedema and there is much research that is still needed,” said Thomas.

Since 1999, Thomas has researched ways to improve the well-being of people living with lymphedema. “[Patients] said that the lymphedema was just as bad if not worse than cancer. So, I thought ‘well if it is as bad as that, if not worse, then maybe this is something that I should look at,’” said Thomas.

“[Lymphedema] cannot be cured, but it can be managed. It’s managed more effectively if it is caught early,” said Thomas.

Creating a space for lymphedema patients to talk is an important part of Thomas’s work. She said that patients feel frustrated when strangers ask about their compression garments.

“They will be getting groceries and the cashier will say: ‘did you do something to your arm”’ so right away the person with lymphedema has to think ‘do I tell them about this condition? Do I tell them it is a result of cancer? Do I really want to tell this person that I have had cancer?’” she explained. 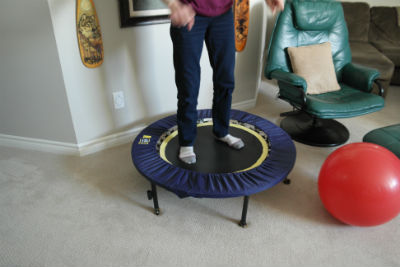 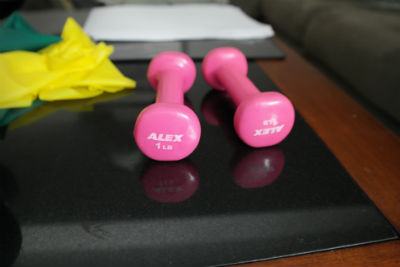 Allen wears compression sleeves that are custom-made, she swims and has also gotten a small trampoline.
Jumping up and down helps the lymphatic fluids move throughout her body. [Photo © Ash Abraham]

Another woman, Rafaela, 32, endured huge changes to her life style after her initial lymphedema diagnosis 10 years ago. She loves dancing, but when she does, the next day is spent in bed.

“I have put in my mind that I can do everything I want, as I wish, but at the same time I know I have my limits,” said Rafaela.

She remembers hurting her left leg and ankle when she was 12-years-old in a soccer field. After the impact, her ankle and leg healed, but eight years later, while she was walking home from her university, she started feeling pain in her leg in the same area. This time the swelling never went away.

“Everybody that hurts something knows how it feels, so imagine this is permanent,” said Rafaela.   Four years later she was finally diagnosed with primary lymphedema. 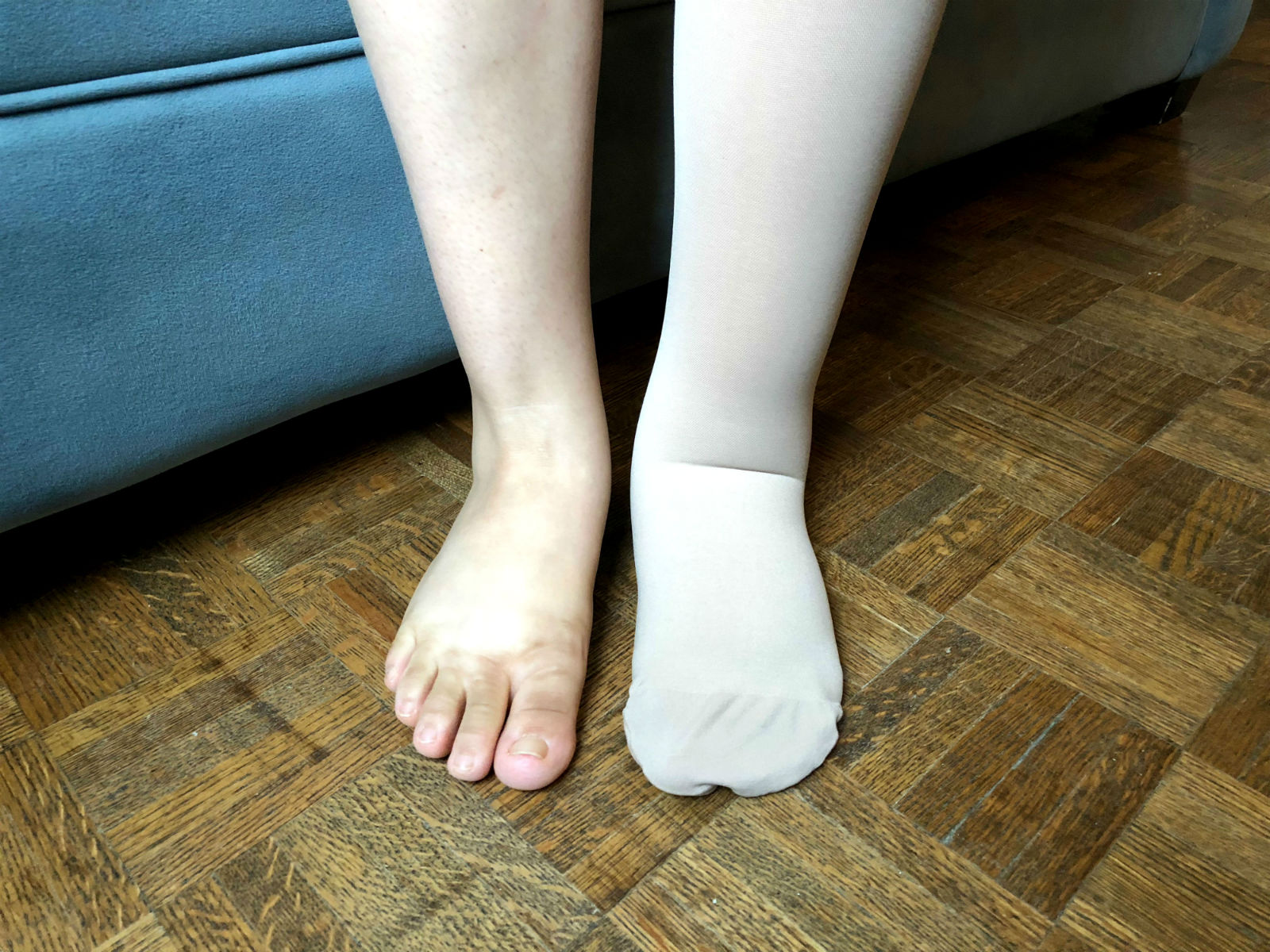 “You need to choose which way you are going to go because it is like every disease, if you get immersed in the suffering it is going to be very hard to get out.” Instead, Rafaela focuses on swimming to relieve pain, wears compression garments on the left leg and doesn’t let the lymphedema interfere with her fashion.

“I use dresses, short shorts,” said Rafaela. “I put on a dress and I know everybody is going to look. It is my life for the last 12 years, but if you hide yourself, what kind of life you are going to live?”