Out of the blue

The power of nature's most unique colour

Whether it be attracting a mate or finding safety, blue resonates with insects, birds and humans

The term “feeling blue” may denote sadness, but the colour is widely favoured by cultures around the world: people seem to find the hue universally appealing.

“Colours and emotions are really tightly linked,” said Nafissa Ismail, an associate professor of psychology at the University of Ottawa. She studies how humans connect colours with feelings and objects. “In any individual, colours can elicit certain emotions.”

But blue has a certain cache with humans, and we aren’t the only creatures with a strong reaction to the shade.

Biologists long thought that fruit flies were drawn to the colour blue, until a new study revealed that they actually work hard to avoid it. The colour also elicits intense responses in birds, leading scientists to believe that such reactions might be tied to the evolutionary essentials of sex and safety.

When researchers at the University of Miami recently set out to study fruit fly colour preference, they put a number of flies in a series of connected tubes where they could fly into segments lit by red, green and blue light. The researchers then watched and recorded the flies’ behaviour over a number of days.

The team found that the fruit flies clearly avoided the blue areas. Instead, they moved into the green and red areas depending on the time of day. Lead researcher Stanislav Lazopulo said that those results were unexpected.

“That was definitely very exciting,” Lazopulo said. “It was very interesting to us, and we immediately started thinking about what could be the reason for this.”

Previous studies had indicated that fruit flies like blue. Those results may have been because the flies in those studies were given shorter amounts of time to make a decision, and so the selection may have been based more on stress than preference. 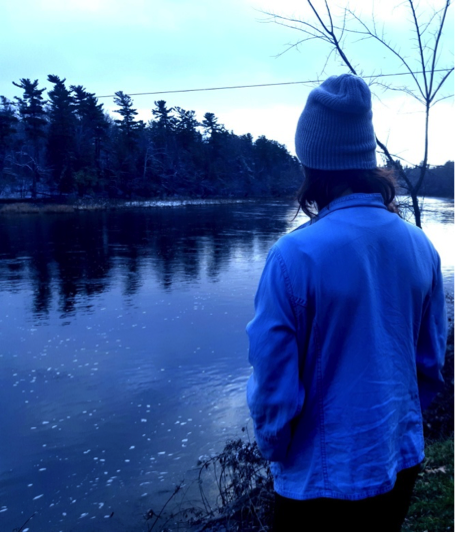 Lazopulo said that there has to be a biological explanation for the avoidance.

“There is definitely always a reason for something to evolve in the animals,” Lazopulo said. “We can always try to explain how the animals benefit from this.”

Lazopulo believes the colour likely represents something unappealing or dangerous for them, and that the insect has adapted its behaviour to represent that preference.

One reason, he posits, could be that fruit flies associate blue light with sky and open air, places where they’re more exposed and therefore more vulnerable to predators.

“There is not much in nature that has blue colour in it,” he said.

Lazopulo also mentioned that blue light has a shorter wavelength that is more similar to UV light, which can be harmful to the flies. He said this is another possibility for their avoidance of blue.

In terms of the flies’ preference for red and green, Lazopulo said that those colours represent darker areas that the insects would find safer and more appealing. Green, in particular, represents areas beneath leaves or around plants where fruit flies search for food.

The flies moved into the green areas during the beginning and end of each day, when they were most active and looking for sustenance. They were drawn to red in the middle of the day, which may remind them of quieter spaces to rest.

Roslyn Dakin, a biologist at Carleton University who studies animal behaviour and was not involved in the study, said that blue could very well represent danger for the fruit fly.

“[Avoidance of blue] would all depend on the fly’s life history,” she said, “how they live in their natural habitat, how they find food and find mates and avoid danger.” 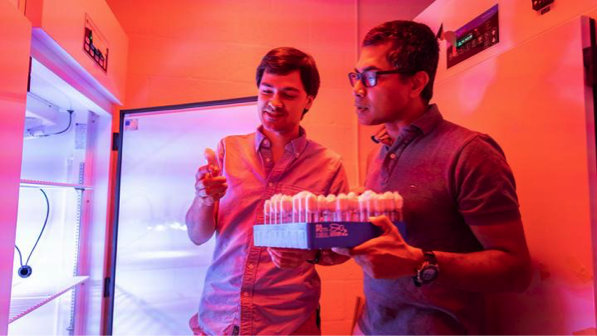 Dakin explained that fruit flies usually feed off decaying fruit, so they like to be under trees and in dim places. This is similar to how Lazopulo explained the preference for green. “It makes complete sense that they would be repelled by the kind of blue visual signals that would indicate an open habitat that’s not going to have those food sources,” Dakin said.

There are other instances in nature, however, when the colour blue is extremely alluring.

“Blue is actually a pretty rare colour to have evolved on animals,” Dakin said, “and the times when it has evolved, it’s very often used in courtship displays.”

She points to male peacocks, blue jays and even some hummingbirds, all of which use blue feather displays to attract mates. Females are attracted to the rare colour, and so males have evolved to display blue.

Another bird called the bowerbird doesn’t have blue on their body, but Dakin explained that the males will court females by collecting blue objects from their surroundings and creating an artistic display. Since blue objects are rare to find in their environment, Dakin said that this may be a way for the males to show their potential partners how clever they are.

“Bowerbirds will build these nest-like structures, but it’s not a nest, it’s just an arena where they display their treasures that they’ve collected,” Dakin said. “Females come and evaluate them and decide whether or not they’re going to mate.” 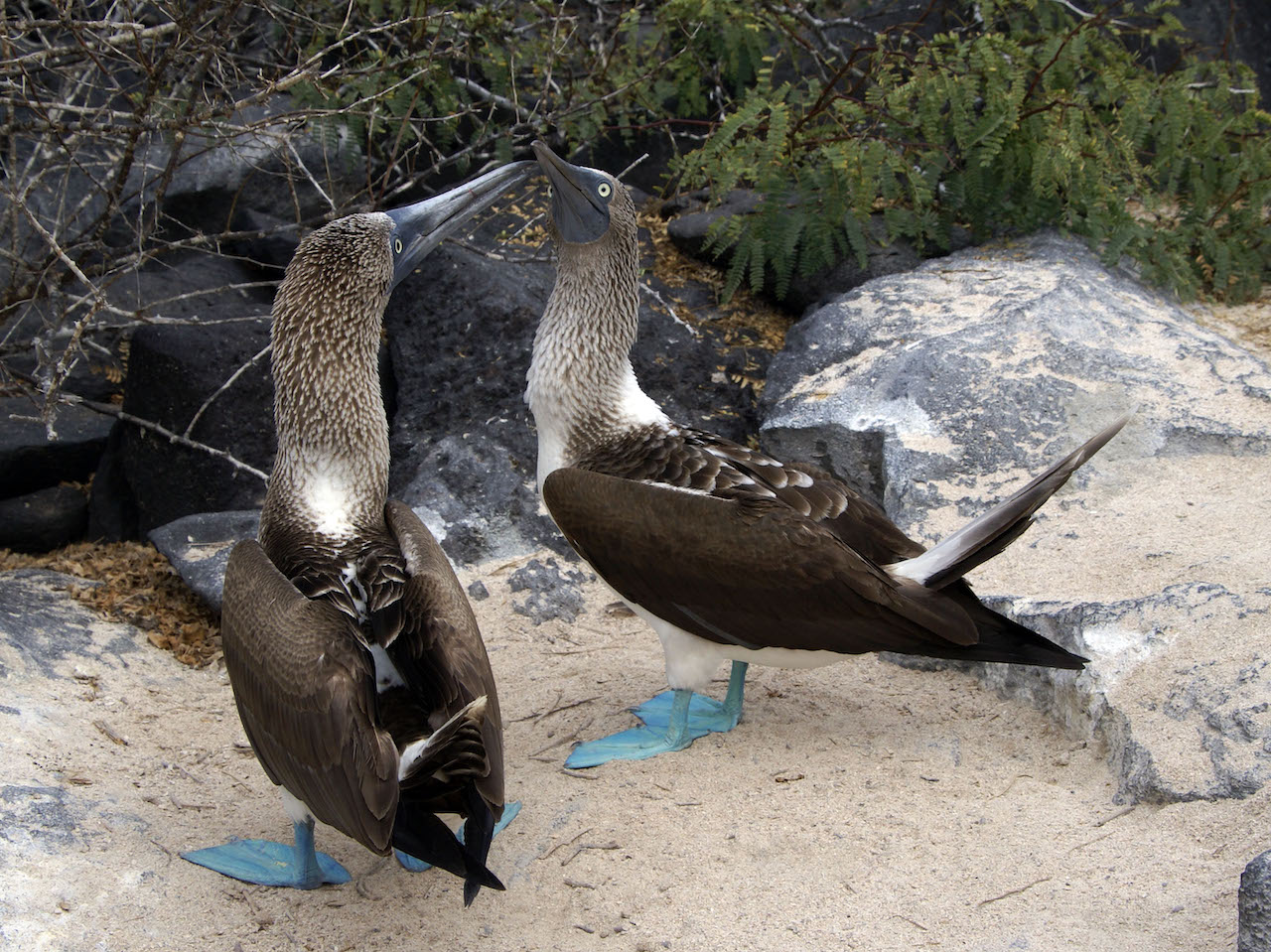 Living off the western coasts of Central and South America, this sea-bird is aptly named. Their large, bright blue feet are shown off to potential mates by a high-stepping strut. The bluer their feet, the more attractive the mate, as the bright blue suggests health. These birds also tend to mate for life.

[Information on the blue-footed booby was obtained through the Galapagos Conservation Trust. Content is licensed under an Attribution-NonCommercial-ShareAlike 3.0 license.] 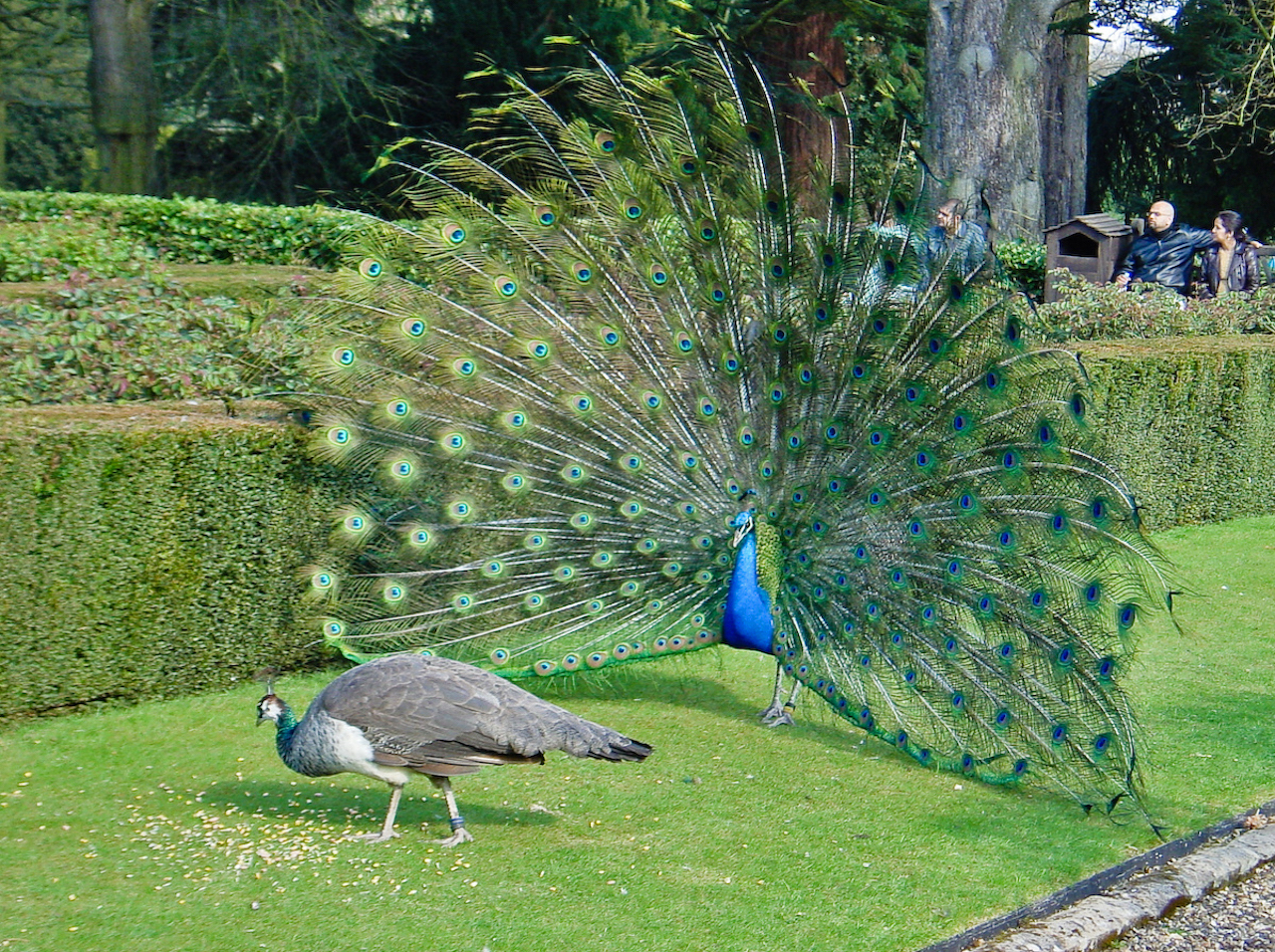 During the mating season, peacocks form small territories close to each other. The males display their brilliant green and blue feathers, spreading their tail in a fan shape and shaking it to make a rattling noise. Peahens will walk through several territories of different males to assess their physical and sexual fitness. 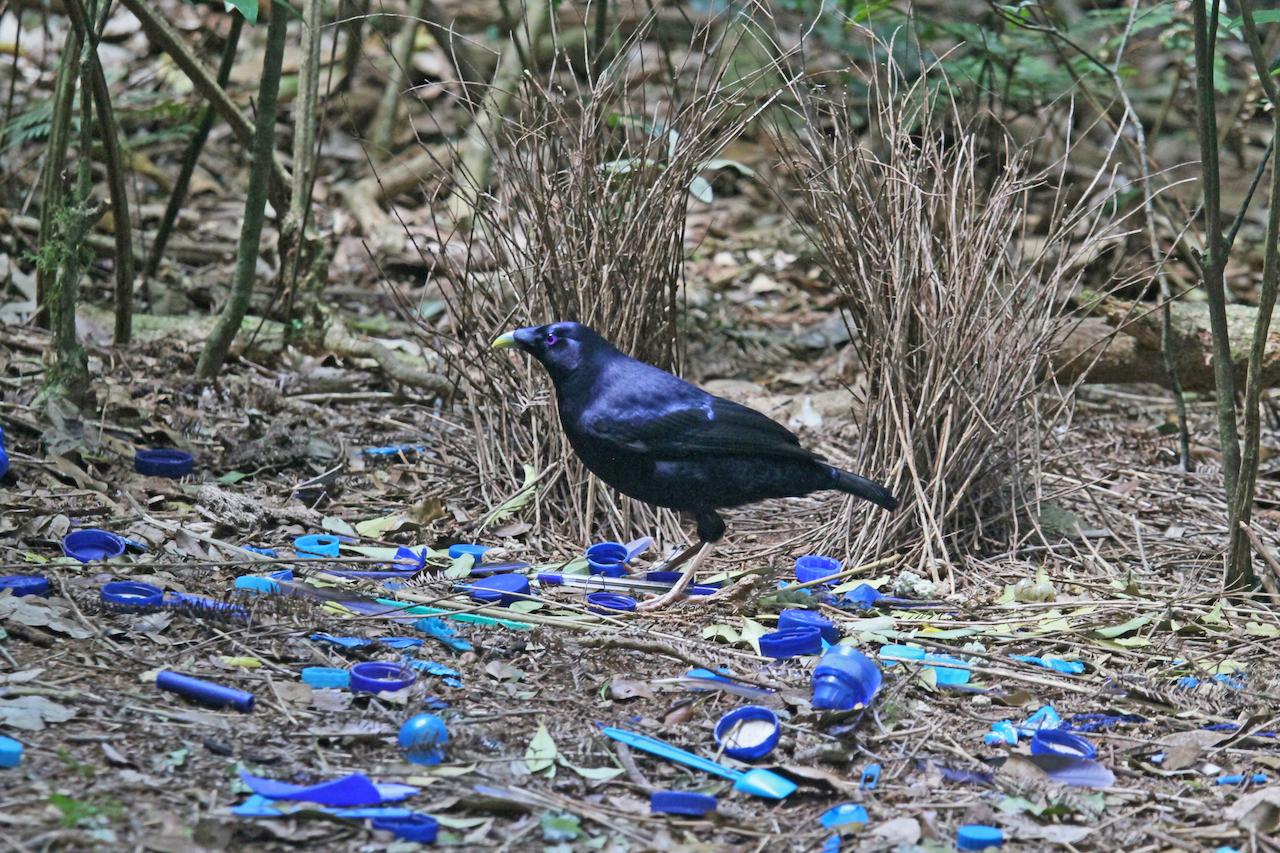 The 20 different species of this bird varies greatly in appearance, but they all create elaborately decorated bowers to attract a mate. Found in Australia and New Guinea, the birds spend anywhere from two weeks to a month getting their bower ready with seeds, shells, petals or items discarded by humans. Different species prefer different colours for their displays. 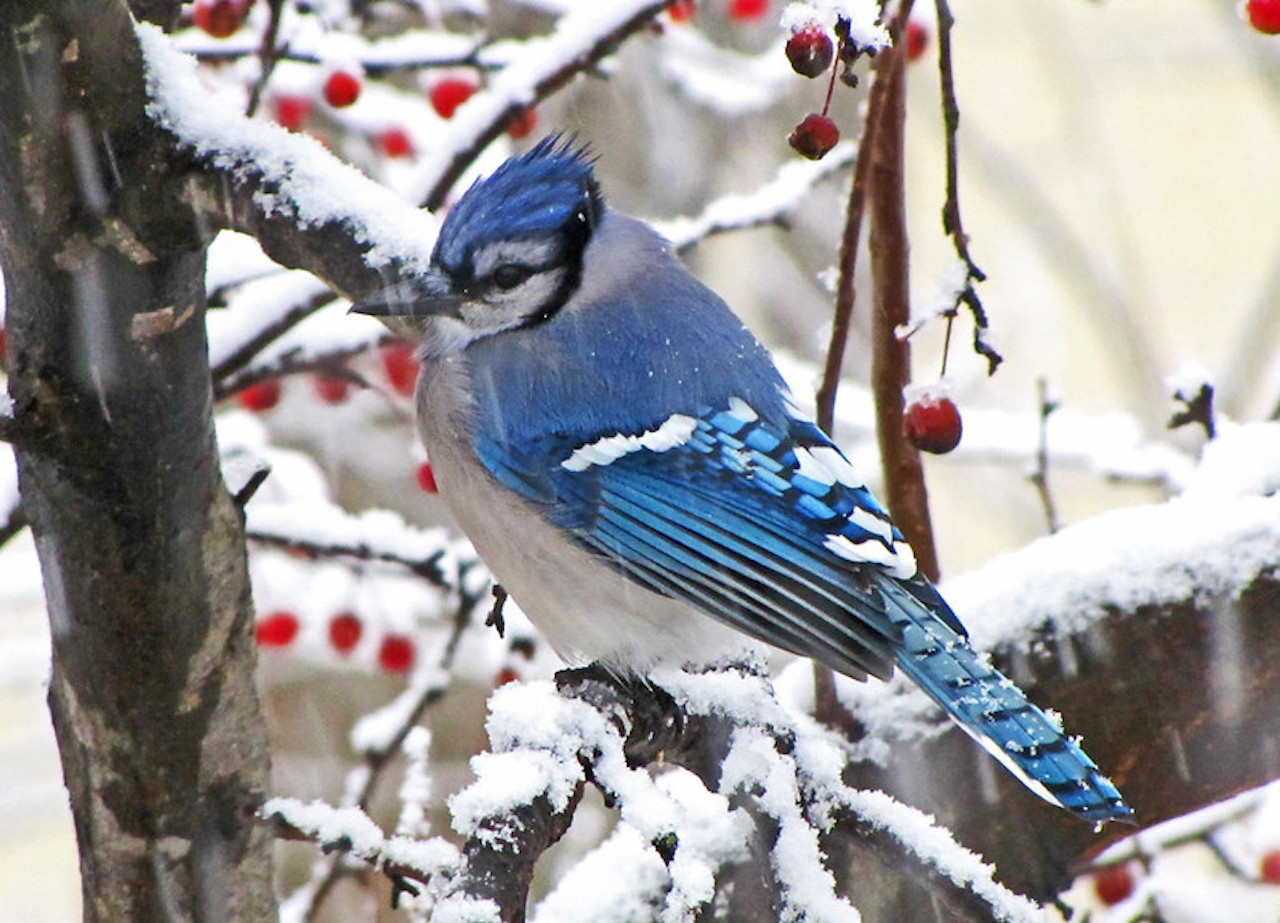 This intelligent, vibrant bird is actually brown. The blue colour is caused by a scattering of light through modified cells on the surface of the feathers. Their distinctive colour and black bridles across their face, nape and throat, helps them to recognize each other.

[Information on the blue jay was obtained through the website “All About Birds, https://www.allaboutbirds.org/guide/Blue_Jay/overview#, © Cornell Lab of Ornithology.”]

“The visual responses to blue are often special for different reasons in different kinds of animals,” said Dakin. “So I find it really plausible that fruit flies, that find their food and find their mates in these dark habitats, would have responses to avoid these big open areas that would have a lot of danger, like birds and other predatory insects that eat fruit flies.”

Just as the male bowerbird evolved to seek out rare blue objects that would display their cleverness, Dakin said it could be possible that fruit flies evolved to avoid these open spaces filled with blue light.

Though blue objects in nature are few and far between, the colour is still ubiquitous in the natural world because it’s the colour of water and the sky. Blue light has one of the shortest wavelengths, and so it gets scattered when it enters the atmosphere, causing the sky and ocean to appear blue.

The fact that blue is everywhere in the outdoors may be part of the reason that humans tend to find blue appealing as well, said Ismail.

Most colours are associated with different things in different cultures. Ismail uses the example of white, and how it can represent purity and innocence in one culture, but death and mourning in another. Blue, however, doesn’t seem to have those kind of varied associations.

“There is no specific connotation that cultural identities have brought to blue,” she said. “It has kind of stayed this global shade that has this constant feel regardless of which part of the world you’re from.”

Ismail also added that the colour is unique because men and women both like it equally. Other colours are usually preferred more by one gender, but blue is favoured by both.

“There is no sex difference in the emotion that is elicited by the blue colour,” she said. “That makes it another reason why companies use it so much in marketing.”