The WHO has started a pilot project in sub-Saharan Africa to test the first malaria vaccine, called RTS,S

By Holly Maass and Jeff Pelletier

In 2015, the European Medicines Agency approved the world’s first malaria vaccine, the RTS,S vaccine. Malaria is an infectious disease transferred to humans by female Anopheles mosquitoes. [Photo © Manjurul on Canva]

Of the many appealing characteristics of Ghana – warm weather, delicious food, vibrant music, and friendly locals who often greet people with a welcoming “akwaaba!” – the country faces the endemic malaria, with over five million confirmed cases in 2018.

Despite being preventable and curable, malaria is a challenge for many nations in sub-Saharan Africa, including Ghana, where healthcare professionals struggle to handle the volume of malaria cases. In 2017, the World Health Organization reported 219 million malaria cases worldwide across 87 countries, most of which were in sub-Saharan Africa. That same year, over 435,000 people died of malaria, and children under the age of five accounted for 61 per cent of those deaths.

Mosquito nets and antimalarial pills are often used to prevent malaria, but these strategies for combating the disease are not entirely effective. Since 1987, researchers have tried to develop a malaria vaccine, mostly unsuccessfully. But in 2015, the European Medicines Agency approved the RTS,S vaccine, a malaria vaccine that provides partial protection against the disease in young children; it prevents the development of the disease in about two-fifths of recipients. Despite the vaccine’s low efficacy compared to other common vaccines, public health officials hope RTS,S can still reduce infection rates and improve the quality of life for people infected with the disease, particularly in children.That’s why the WHO launched its Malaria Vaccine Implementation Programme in 2019. The pilot project is currently underway in Malawi, Ghana, and Kenya, with results arriving in 2022. 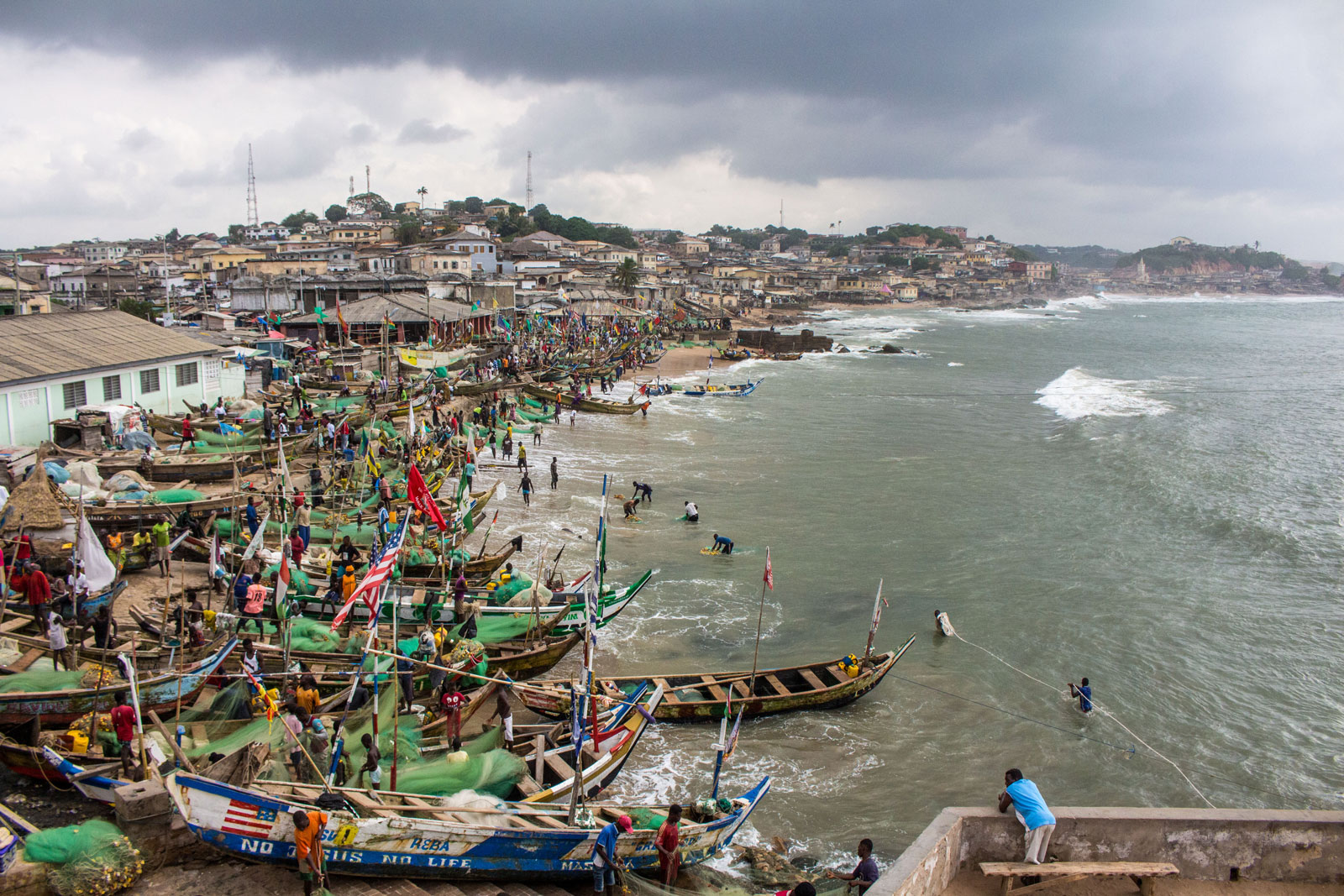 The vibrant Ghanaian fishing city of Cape Coast. Ghana is one of three countries where the WHO is implementing a pilot project to test the first malaria vaccine. [Photo © Jeff Pelletier]

Malaria is caused by Plasmodium falciparum parasites, which are transferred to humans by infected female Anopheles mosquitoes. Once a person is infected, symptoms typically appear after one week, but the onset of the disease can take up to several months. People may develop a fever, headache, and chills. If not treated immediately, malaria can become severe, and people may develop complications including organ failure.

To date, the best strategies for preventing widespread malaria infections in communities are the combined use of bed nets and antimalarial pills, explained Magalie Nelson, a senior health advisor and physician for Plan International Canada. The organization provides malaria support to communities in five African countries: Zimbabwe, Liberia, Guinea, Senegal, and Cameroon.

Bed nets prevent malaria by providing a physical barrier to stop mosquitoes from biting people at night, she said, and they are usually treated with insect repellant. People visiting or living in sub-Saharan Africa can also take medications such as Malarone to prevent and treat malaria. Like many international organizations, Plan supplies artemisinin combination therapies to treat the disease in sub-Saharan Africa.

For the past 30 years, public health officials have called for the development of a malaria vaccine. Researchers conducted numerous trials of the RTS,S vaccine since its development in 1987, but the vaccine failed to show any efficacy against malaria until recently.

Delivered to young children in four separate doses, the RTS,S vaccine’s mode of attack is to stop the parasite from reaching the liver, where it can multiply, re-enter the bloodstream, and destroy red blood cells.

Between 2009 to 2014, the WHO gave the vaccine to over 15,000 children in seven sub-Saharan African countries, as a part of the largest RTS,S clinical trial to date. The vaccine prevented malaria in 39 per cent of cases, and severe malaria in 29 per cent of cases. Hospital admissions and the number of blood transfusions required also significantly decreased.

In comparison with vaccines for measles, mumps, rubella, tetanus, and polio – all of which have efficacy rates over 90 per cent, and are effective for between 10 years to life – the new malaria vaccine’s results may seem middling.

But even if RTS,S doesn’t prevent malaria in most cases, the vaccine can still significantly improve an infected person’s quality of life, said Robert Smith? (the question mark is a part of his name), a math professor at the University of Ottawa who statistically models infectious diseases.

“The vaccine is not stopping a disease in its tracks, it’s more like it’s slowing it down,” Smith? explained. “Even if you don’t eradicate the disease – which is a big goal – you can still slow it down, and then you improve the quality of life for many, many people.”

Vaccine efficacy is a measure that compares the rates of disease between vaccinated and unvaccinated people, based on a controlled lab setting. “It’s extremely rare for any vaccine to be effective in all cases,” said Smith?. That’s what most people think – you get the vaccine and therefore you won’t catch the disease, but it just doesn’t really work like that for most diseases.”

Smith? said improving the quality of life is especially important for children who get malaria because their immune systems are not fully developed. According to him, a vaccine that may prevent the extent to which people’s lives are impacted by malaria can reduce the number of deaths directly caused by the disease – especially children’s deaths.

“If you can slow [the disease] down enough so that the child’s immune system has a chance to develop…you would massively increase survival,” he said.

Overall, Smith? said he is impressed with the recent results of RTS,S tests, as the vaccine has been a long time coming.

“The fact that we have any efficacy against malaria at all is astonishing actually,” he said. “It’s a very, very tough disease to deal with, so I’m very excited about this vaccine.”

The RTS,S vaccine’s modest protection is related to malaria’s complexity, explained Kevin Kain, a tropical medicine doctor based in Toronto, who was involved in early malaria vaccine trials in southeast Asia.

“That vaccine is now being considered in multiple countries to decrease the burden of malaria, but it doesn’t come close to things like Hepatitis vaccines in terms of how protective it is,” said Kain. “Malaria vaccines will continue to improve but there’s no shining new candidate on the horizon right now.”

According to Nelson, the new vaccine has potential in the fight against malaria but it must be used alongside other methods of prevention.

“The global reductions of cases that we have seen are the results of these methods combined – we cannot actually link to one method,” said Nelson. But she’ll be watching for the results of the WHO’s pilot project for clues on how the vaccine might best be implemented.

“Another tool [is] actually welcome,” she said. “It’s good to have this one come in.”

A LESSON IN MATHEMATICAL BIOLOGY: Since the early 2000s, the University of Ottawa’s Robert Smith? has been creating mathematical mechanisms to theorize the behaviour of diseases and how vaccines can impact them.