Going with the flow:

Despite misgivings, a renewable energy project in the Bay of Fundy is harvesting the power of ocean tides

Beneath the heaving surface of the Bay of Fundy — home to the world’s most extreme tides —  stands sits a machine that looks like a portal to another dimension. The giant cylinder stands 21 metres tall, about the height of a six story building, and weighs in at 1000 tonnes. Its inner radius is spanned by a giant propeller. And as tidal waters rush through in a twice daily cycle, the blades turn with a smooth and measured pace, steadily converting the energy of the flowing water into a renewable form of electricity.

In 2016, Nova Scotia became the site of a new renewable energy project, capable of producing 2 megawatts (MW) of clean alternative energy. The technology, standing at a towering 21-metres high and weighing approximately 1000 tonnes, shares many similarities with traditional wind turbines. Both use propellers, the Earth’s natural energy, and both could reduce Canada’s greenhouse gas emissions and carbon footprint.

While the wind power industry relies on the flow of air on land, the Cape Sharp Tidal project operates at the floor of the Bay of Fundy, specifically in the Minas Passage, utilizing the greatest tidal range on the planet. 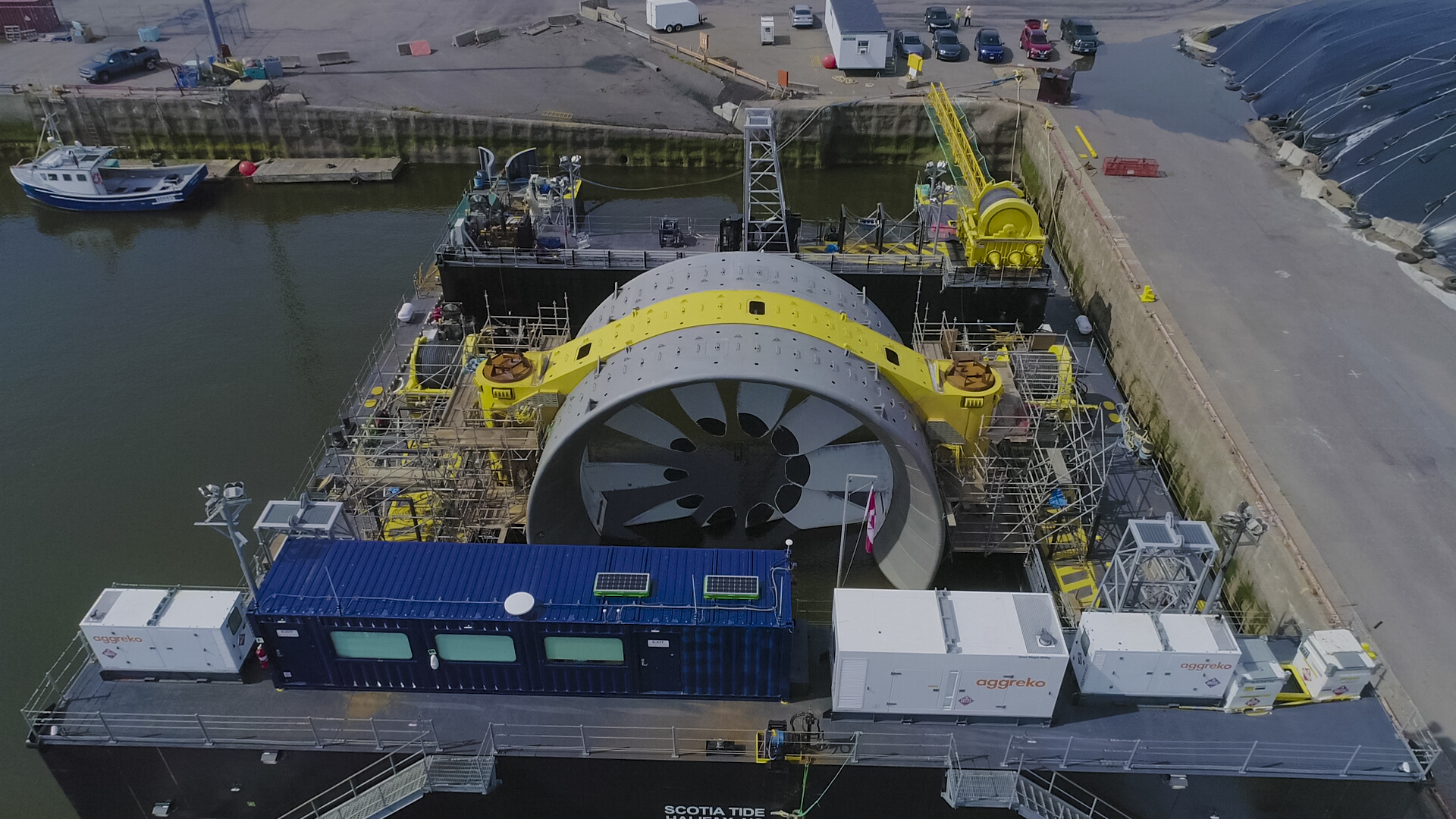 Twice daily, an estimated 160-billion tonnes of seawater flow in and out of the Bay of Fundy, more than the total flow of all of Earth’s freshwater rivers. The sheer volume of water that travels through the bay daily provides Nova Scotia with a unique opportunity to develop a never before seen energy source in Canada.

Tidal energy development is on the rise, and has been present in the Bay of Fundy since the mid-80s with the introduction of the Annapolis Tidal Station. The furthering of this project could prove to be the answer to Nova Scotia’s 2020 goal of reducing greenhouse gas emissions, and increasing renewable energy sources.

Supported and funded by both the provincial and federal governments, The Cape Sharp Tidal project is a multi-phase attempt to demonstrate in-stream tidal technology and, according to spokesperson Stacey Pineau, “developed with the goal of enhancing understanding of the potential for sustainable in-stream tidal energy development.”

In-stream technology simply refers to placing turbines in naturally flowing bodies of water, opposed to creating flow through man made dams and barrages. The in-stream turbine propellers also spin both directions, utilizing both the ins and outs of the tide.

Located just over 100-kilometers from the Cape Sharp Tidal site is the Annapolis Tidal Station. Opened in 1984 and one of only three tidal power plants in the world, this station utilizes the same tidal power as Cape Sharp, but instead of in-stream turbines, uses hydroelectric dam technology.

The plant traps and releases water into the station’s turbines, dependent on the force created by the falling water to generate electricity. Capable of producing 20MW, the station uses 100 per cent of the water that flows through the passage where it is located, while the Cape Sharp Tidal project’s in-stream turbine takes up only 0.001 per cent of the Minas Passage.

Over 99 per cent of the water flowing through the passage will not pass through the turbines, according to an estimate by Cape Sharp Tidal. The Annapolis Tidal Station has been linked with increased river bank erosion and trapping of marine life, issues the Cape Sharp open-centre turbines are likely to avoid.

Cape Sharp Tidal, along with parent companies OpenHydro and Emera, deployed its first open-centre turbine into the Minas Passage in November 2016. The philosophy behind the turbine design is described by OpenHydro as, “simple as possible, resulting in a device which has low cost and low maintenance,” according to the company’s website.

The Minas Passage, a narrow channel connecting the Bay of Fundy to the Minas Basin, has extremely powerful size due to its banks closeness to one another.

The turbine’s 10 blades are made up of glass-reinforced plastic, while the rest of the structure consists predominantly of steel. The propellers, which face inward opposed to outward like a traditional wind turbine, end short of reaching the middle of the structure’s 16-metre diameter, leaving an opening in the turbine’s centre. The blades rely on the kinetic force of the tides to turn, which creates clean energy that is distributed via OpenHydro’s Turbine Control Centre (TCC). The blades turn at a rate of six to eight rotations per minute, which is equated with a fast walking speed.

Concerns regarding the impacts these turbines would have on both the seabed and marine life have been made vocal by some Nova Scotians, most prominently the Bay of Fundy Inshore Fishermen’s Association (BFIFA), since the announcement and subsequent installation of the first turbine. The BFIFA, representing 175 Nova Scotian fishermen, took the Cape Sharp Tidal project to court in August 2016, only a few months before the deployment of the first turbine.

The group claimed research on the turbines’ effects within the bay were, “inadequate,” and, “could lead to the decimation of the Bay of Fundy,” according to a CTV interview with BFIFA spokesperson Colin Sproul, before the installation of the first turbine.

The BFIFA called for Margaret Miller’s, Nova Scotia’s Environment Minister at the time, approval of an environmental monitoring program by FORCE to be reviewed, believing it failed to address key conservation concerns. Ultimately, the case was dismissed after Justice Heather Robertson found the efforts of FORCE to be sufficient.

FORCE, which is Canada’s leading test center for in-stream tidal energy, has been monitoring the environmental implications of tidal technology in the site area since 2009. With an environmental effects monitoring program (EEMP) in place, FORCE is helping to develop an understanding of the Minas Passage’s natural environment. Funded by both the federal and provincial government, all of their findings are made available to the public on their website.

“What we do is act as a steward to the site, so that is doing all of the environmental research both in terms of site characterization…as well as the marine biology of the site. Now with the introduction of a turbine, how is the environment interacting with the turbine.” – Matt Lumley, spokesperson for FORCE

FORCE, monitors many elements of the Bay of Fundy, but primarily are interested in the distribution and behaviours of local fish, porpoises, and seabirds, and whether these animals will be affected by the introduction of turbines.

According to Graham Daborn, a professor at Acadia University who has spent 40-years researching the effects tidal energy has on the environment, “The testing of one or a few large turbines will have immeasurably small effects.”

“We will not be able to monitor or measure the change in tidal flows, or sediments, or erosion effects of a few such devices,” explained Daborn, “On the other hand, arrays of hundreds of such devices could potentially cause significant changes in the physical properties and processes in the Upper Bay of Fundy, but we will not be able to predict those changes until we have devices in the water and can study their effects.”

The future of the flow

Taking merely 2-hours to install on the seafloor, the device was connected to the Canadian power grid within a day, and has been providing 2MW of energy production to Nova Scotia ever since.

A second 2MW turbine was expected to be installed by the end of 2017, but has since been delayed until closer to the summer of 2018, simply to avoid complications with harsh winter weather. The installation of the second turbine will mark the completion of the first phase’s goal of 4MW of energy production.

The proposed phases of this project could see an increase from the initial goal of 4MW, to 16MW in the second phase, 50MW in the third, and ultimately 300MW of energy in its fourth and final phase. According to Emera, 300MW is enough to generate power, “for nearly 75,000 customers,” almost 13 per cent of Nova Scotia’s current population.

When two turbines do become present in the bay, Nova Scotia’s CO2 emissions will be reduced by 6,000 tonnes per year, according to Cape Sharp Tidal. They equate this to taking 1,100 cars off of the road for a year. Projects like Cape Sharp Tidal, as well as other efforts in wind farming, are going to be the keys to fulfilling Nova Scotia’s goal of 40 per cent renewable energy sources by 2020.

“In the last few years, wind farms have sprung up like mushrooms all around the province,” explained Daborn, continuing, “However the space for further is limited, and the fact that it is unpredictable means that one cannot use it to meet the demands of the grid completely. And right beside the province is the world’s best site for tidal power, which is more than sufficient to meet all of the province’s electricity needs, and is eminently predictable.”

For a province that relied on burning coal for 60 per cent of their total power in 2014, the need for clean alternatives is abundantly clear. Although the percentage of renewables has grown from 8 per cent in 2005 to 22 per cent in 2014, Nova Scotia is confident that, “By 2040, the province will have moved from among the most carbon-intense electricity generators in the country to a green powerhouse,” according to the province’s 2015-2040 electricity plan.

Natural Resources Canada, which provided $23-million indirectly to the project, continues to monitor the development of this technology, not only in Canada, but at other test sites around the world.

“By making smart investments in clean technologies, our government is driving innovation that will make Canada a global leader in the transition to a low-carbon economy creating economic prosperity while protecting the planet we all cherish.” – The Honorable Jim Carr, Canada’s Minister of Natural Resources

The government understands that they have a good source of energy in their tidal resources, not just in Nova Scotia, but amongst their other coasts. When the technology is proven to be fully operational and reliable, in-stream tidal energy could find its place in Canada’s future electricity demands.

In Daborn’s opinion, “If we could answer the (environmental) questions…and if the turbines could be manufactured and maintained at reasonable cost, then it seems a no-brainer that tidal power could represent a major part of the energy needs of the region far into the future.”