Being sweet to babies: How Denise Harrison is changing infantile pain management 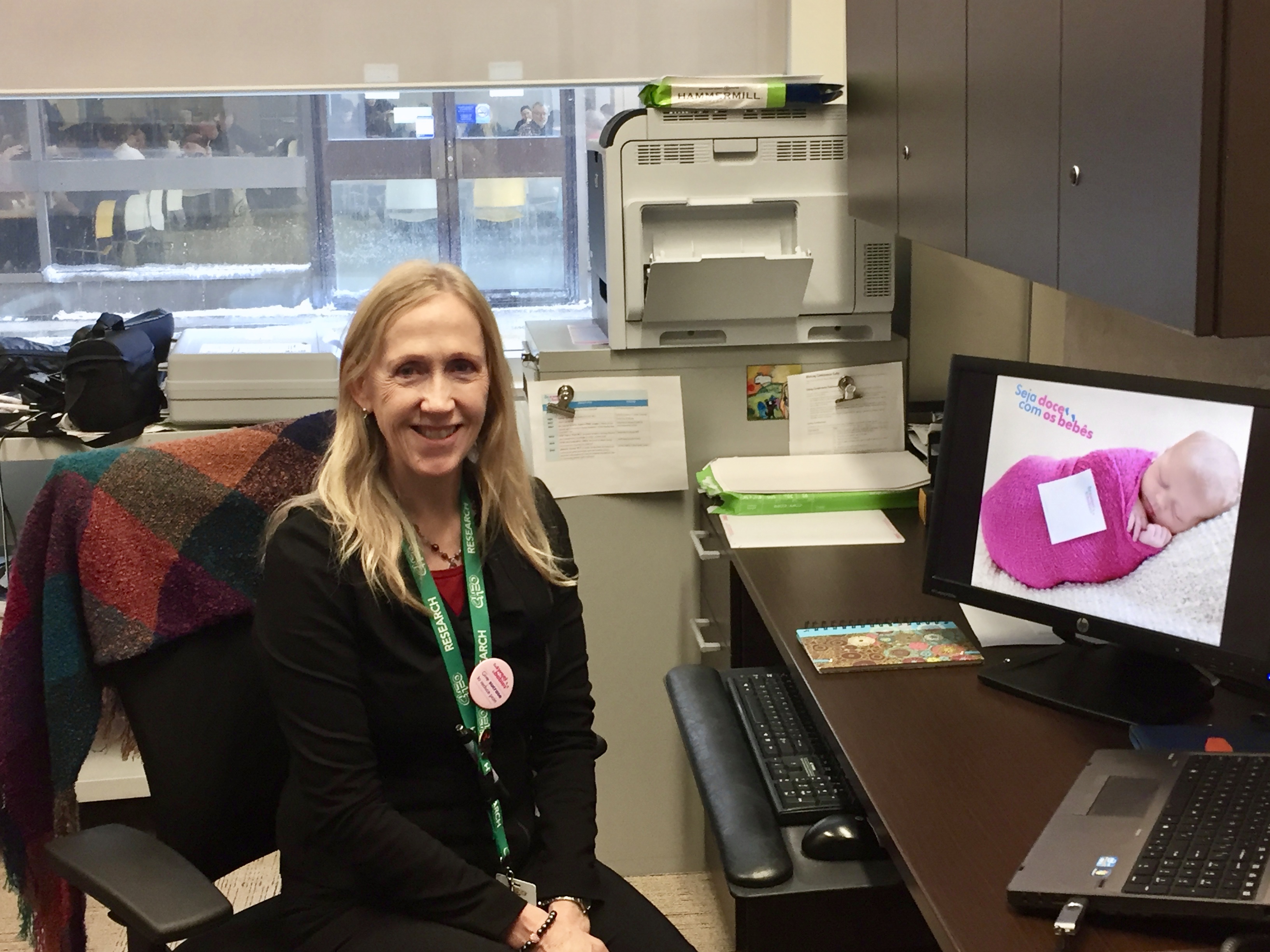 It was all thanks to the wine, says Denise Harrison, recalling the conversation that first brought her to Ottawa.

The setting was a conference in Wales in 2010. Harrison, an Australian nurse-turned-researcher had just finished a postdoctoral fellowship at Toronto’s Sick Children’s Hospital, where she had been studying infant pain. By random luck she struck up a conversation with Barbara Davies, a Canadian doctor from Ottawa. While the two sipped from elegant glasses, Harrison — who says she was feeling chatty due to the alcohol — mentioned she was looking for a job. Davies immediately pointed her to the Children’s Hospital of Eastern Ontario (CHEO).

“There had been a position for five years and they could not fill it. I talked to my husband and we decided I’d go for one interview, and if I didn’t get it I’d be totally happy because I really wanted to go back home,” said Harrison. “Of course, I went, and got the position,” she laughed.

The job was the Chair in Nursing Care of Children, Youth and Families at CHEO, a position Harrison has held since 2011. It was the perfect match for Harrison, who always knew she wanted to work with infants and children since she was a kid.

“Nursing was my way in to babies,” she said. “I ended up doing what I always wanted to do but with very sick babies, not with healthy babies.”

Born and raised in Australia, Harrison is best known for her research on pain management in babies, especially her program “Be Sweet to Babies” which examines how sucrose impacts babies’ stress during painful procedures. It’s an interest she has been exploring for years, prompted by her first nursing job at the Royal Children’s Hospital in Melbourne. It was there in the paediatric intensive care unit that one incident ignited her research.

She was helping a physician put an IV drip in a baby who was very ill. He squirmed and began to turn blue because they were hurting him trying to insert the tube. He went from blue to grey and then white as he cried weakly. His oxygen levels went down to 40 and his heart rate dropped. The procedure had to be stopped so they could resuscitate him. Harrison was furious, telling the doctor they had to do better.

“I said, ‘we can no longer do this, it’s unethical, this is unkind, this is horrible, and this harms babies,’” she recalled, stiffening at the memory. “We nearly lost this baby to a minor painful procedure.”

From that day she set out how to research pain and hasn’t stopped since.

“You hear babies cry, they scream, they’re in pain, but we did not recognize it as [being] that important.”

Harrison examined the issue during her master’s degree in nursing at the University of Melbourne, where she looked at how sucrose affected sick older babies. She knew there was evidence that small volumes of anything sweet containing sucrose or glucose helped healthy babies and stable premature babies cope with discomfort. But she found there hadn’t been much done to see how it would work on babies who weren’t pre-term, who’d had operations, who had congenital abnormalities, and who’d had surgery.

Her results were that sweet things also helped the sick infants, so she decided to stay at the university to do her PhD and research further. She found Dr. Bonnie Stevens from SickKids Toronto had done most of the work with sucrose. Harrison sought Stevens out to do a post-doctoral fellowship, feeling that despite her masters and PhD, she was a clinical nurse at heart who lacked research experience.

She packed her bags and moved to Toronto to work with Stevens for two years. She learned more about researching, and also how to network.

After her post-doc came the wine in Wales, and Harrison securing her job at CHEO. As part of her position as a chair, she also teaches at the University of Ottawa. She teaches between two and four courses, including pediatrics for the third-year nurses and a research methods course for the graduate students.

Catherine Larocque was one of Harrison’s nursing students at uOttawa who wanted to do research in pediatrics, but had no experience. Harrison took her on anyway.

“My first impression of her was that she was very kind. She really cares about her research and she cares about these babies and these kids who are in pain and that’s kind of what drew me to her,” Larocque said. “As I got to know her more, I realized she’s a quant brain, she thinks about pain in terms of numbers and statistics, so she’s really strong at quantitative research.”

“She’s passionate, extremely intelligent, she’s incredibly supportive of students. She’s the only professor who will take first and second year students, and she supports us all the way through,” she said.

Larocque is now part of Harrison’s research team at CHEO, which Harrison gushes is a great place to work. Every year around Halloween, the hospital runs a family flu clinic and around 1000 people get vaccinated including many babies and young children. Harrison, Larocque and the rest of the team are present each year, investigating the prevalence of pain. Every nurse’s station and each injector’s station has sucrose on hand. Harrison loves it, because it is putting her research into action.

“The aim is to reduce pain and distress in the kids, so you’re not only working to do that but researching to see how effective we are at doing that. One thing we’re finding is so many kids are scared of needles,” she said. “It just emphasizes that we have to do these things at the beginning when they’re babies.”

Families have come back to her saying she’s helped with their baby’s pain management and helping the way they think about pain.

For all that Harrison has accomplished—including publishing over 50 papers and delivering over 175 presentations on child pain management—like many other researchers she has faced obstacles professionally.

“Some of [my] frustrations are with the barriers nurses tell me about. Some nurses say it takes me too long or I’m too busy [to implement the pain management strategies],” she said. “If you help the baby breastfeed during the needle for example, it’s much easier, because they’re warmer, they’re calmer, they’re quieter and it’s easier to take their blood.”

Val Albrecht, a midwife from Ottawa South Midwives, uses skin to skin contact and breastfeeding to reduce stress in babies and says these strategies are extremely useful.

“If a baby is not transitioning well, or their heart rate is off, a baby who is off a bit, if you put them skin to skin it usually settles quickly and resolves,” she said.

As for using sucrose—by feeding distressed babies sugar water—it’s not something that she offers because as a midwife her focus is on birthing the baby but she says she witnesses it commonly.

“If the baby is spending the night in the hospital and they’re doing the testing and we’re not there, they [can] give it for certain procedures and it seems to work.”

Personal challenges, such as being far from Australia, have also been tough for Harrison.

“Some of our family visits, but the younger ones, the nieces, the nephews and my friends, I’ve missed out a lot on their lives. I think it’s a challenge for anyone, who moves away from home,” she said.

But she’s grown to enjoy Ottawa, despite it not having the beautiful oceans she misses. As an avid runner, she says Ottawa is the best city in the world for running and she’s aiming to complete the half marathon Canada Army Run this year.

Her focus for the future is knowledge translation—figuring out the most effective ways to put her research into practice. Currently, she’s in the middle of a randomized controlled trial examining the use of sucrose in sick toddlers in the hospital, to see if it works beyond one-year-olds. She also hopes to work more closely with parents.

“We need the parents to breastfeed and to hold the baby skin-to-skin so there are parents on my team, so it’s really working in partnership with the users, and frontline people,” she said.

Larocque says Harrison is particular because “she likes things a certain way. But she’s always very professional, and everything we produce is professional. Cross our T’s, dot our I’s.”

This meticulousness has enabled Harrison to fully throw herself into her work each and every day.

“One thing with being a researcher is that we work a lot, but I’ve never felt that it’s a job; it’s a life. I feel really lucky to feel that way,” Harrison said.

Before retiring, Barbara Davies’ research focused on knowledge translation and the implementation of nursing best practice guidelines to improve patient outcomes and nursing service delivery. Now Harrison is continuing where Davies left off. Harrison says her chance encounter with Davies showed the importance of networking, but she agrees she wouldn’t be where she is today without fate and a dash of Sauvignon Blanc.