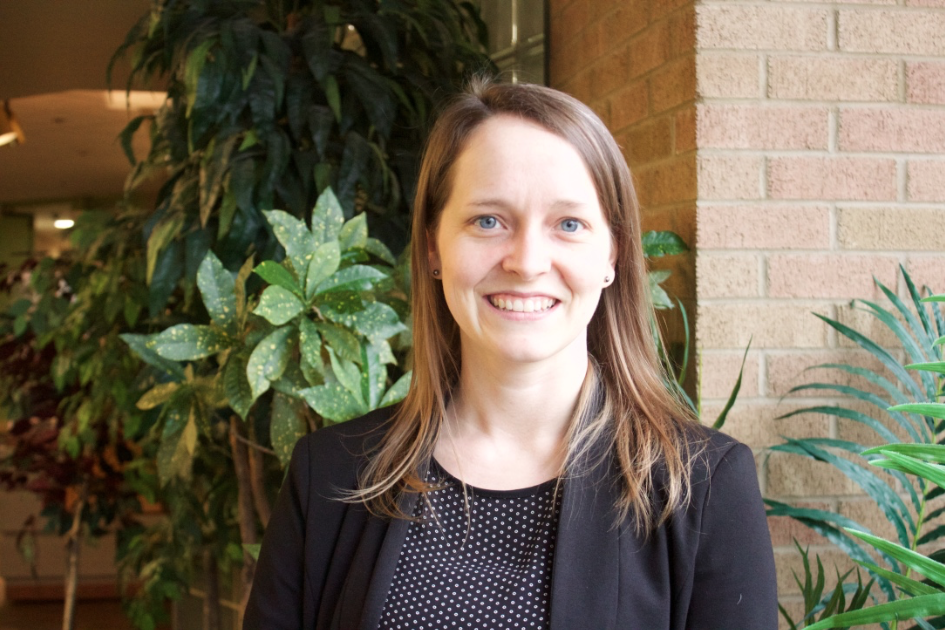 When Dr. Caitlin Cassidy thinks of her childhood, she remembers the laugh track to television sitcoms. Growing up, the Mississauga native’s home was filled with sounds from her brother David’s favourite show.

“He loved Friends, so Friends was always on in our house 24 hours a day and he’d just be stretched out on the couch. He wasn’t in his wheelchair very much at home, that was sort of just for going out.”

Now 35, Cassidy is sitting in her office on the fourth floor of London Ontario’s Parkwood Institute. The name is fitting; from her window she can see a sea of green grass and, in the distance, the trees that mark the beginning of Celebration Forest. Her office is bare, with only a handful of photos of her two children on a shelf by her desk. 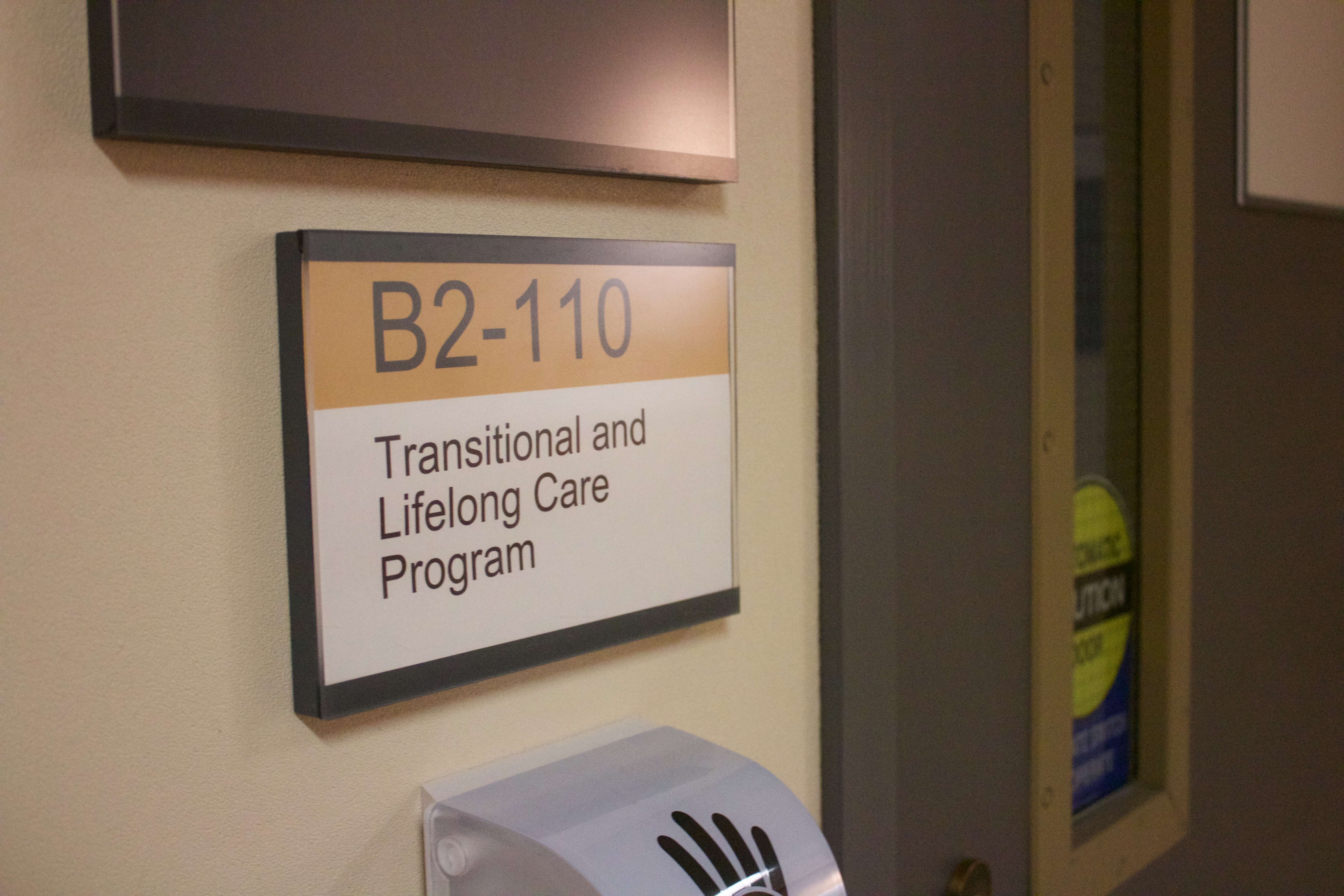 Petite, with bright blue eyes and red hair that hangs loosely to her shoulders, Cassidy speaks quickly, but slows down when she talks about her younger brother, who died in 2006 and is the inspiration for her practice.

She remembers David, with buzzed brown hair, brown eyes framed by glasses, as laughing along with his favourite television show.

“He fairly constantly had a wide-open mouth that was very often smiling.”

David was born with cerebral palsy, a chronic condition that affected his motor skills. His movement was limited, and he often used a wheelchair and needed care for things like feeding and bathing.

“I think that at the very base, all that I ever thought that I wanted to do was I wanted to help people like my brother,” said Cassidy. “I wanted to be a person that they could go to with whatever problems that they had. And in many ways, I guess, I wanted to provide a kind of general service to them.”

Less than a decade out of medical school, the physiatrist took the leap into setting up the Transitional and Lifelong care program. Cassidy and her team worked a year and a half to secure initial funding, just over $350,000 from the Local Health Integration Network. The clinic became one of the first in Canada to bridge the gap between pediatric care and adulthood for those suffering with chronic illness like spina bifida and cerebral palsy.

A 2011 study published in the United Kingdom’s Archives of Disease in Childhood Journal recognized that the transition between pediatric and adult care is a risk period for poor clinical outcomes. The team reviewed ten studies and found that clinics that combine services for youth and adults “produced improved outcomes.”

Now approaching its second anniversary, the program has swelled to include 500 patients aged 15 to over 70. The practice is made from a team of eight specialists including a speech language pathologist, a physiotherapist, a social worker, and a nurse practitioner.

On the weekends Cassidy works in a spina bifida clinic for youth, recruiting them for the program. Like CP, spina bifida is a condition present at birth caused when the bones of the spine fail to cover the spinal cord. Most children don’t have any symptoms, but those with severe spina bifida can experience long-term complications like mobility problems. She spends over an hour with each new patient once they join, addressing concerns that range from medication to mobility. Questions about quality of life are at the heart of the discussion.

From a young age she was hauled along to her brother’s appointments, and his specialists inspired her to pursue a similar career path. After high school she studied Kinesiology at McMaster and applied to three different graduate programs when she finished her degree. She decided to pursue medicine at the University of Ottawa and took an interest in physiatry, a practice centered around treating pain and improving function. And, it allowed Cassidy to look at patients more holistically.

“As someone with a lived experience I knew that at the end of the day, yes it was important that someone prescribe this medication for him, because that’s critical, but it was also super important that my mom have someone to talk to about what was going to happen when he left high school. I wanted to be someone who could look at things with a lot of different lenses.”

After graduating from pediatric care into adulthood, David started to regress. There wasn’t a clear path for navigating the healthcare system. His bouts of pneumonia became more frequent, and he started to vomit what looked like coffee grounds, a symptom of a bleed in his upper intestines. David was made comfortable, and he passed away while Caitlin was attending medical school in Ottawa.

Cerebral palsy exists along a spectrum and patients with few mobility issues can have a full life. For those like David, the prognosis is measured in years and some patients die from breathing complications due to feeding tubes or from inhaling food particles. One study suggests that pneumonia is responsible for up to 40 per cent of deaths from those with cerebral palsy.

But the road was bumpy. Her team had to fight for funding and even for office space. For the first four months, the social worker and occupational therapist had no office and booked rooms at random around the hospital to work in.

Elizabeth Hardy is a social worker and one of the team leads in the program. Patient advocacy is a large part of her job and she was recently able to reinstate a patient’s disability funding. She says the team has been fortunate to have Cassidy.

“I think physician leads should take some kind of look at her as an exemplar to be frank because she is a collaborative physician lead and not a kind of operating from a hierarchical perspective or point of view,” she says. “She’s role-modeled inclusivity and collaboration and I think that filters down into our team.”

Despite their modest start, the program is better organized and now even has a full time administrator committed to overseeing the work they do, and lobbying for money on their behalf. Cassidy says she’d like to see a psychiatrist join the team, and funding is always needed to meet the growing number of patients.

Dr. Jan Willem Gorter is a physiatrist who came to Canada a decade ago to take up a position at McMaster Children’s Hospital in Hamilton.

“When I arrived … basically there was no infrastructure for teenagers with cerebral palsy and other developmental disabilities to adulthood,” he says.

Now he’s thankful he can refer patients to Cassidy. Gorter researches the transitional period between childhood and adulthood, interviewing patients and family members about their experiences.

“Parents feel really lost after their last visit in the pediatric setting, they describe their experience as falling off a cliff,” he says.

“The care they need doesn’t go away when they turn 18,” he added.

Cassidy remains optimistic that more Canadian youth will be able to access transitional services in the future. I ask her if any of her patients remind her of David.