The possibilities of alien life existing in Earth-like conditions or completely new ones, and how close we are to discovering it.

“An analogy that people often make is it’s kind of like searching for your keys under the lamp post after dark. Not necessarily because you think that’s where your keys will be but because that’s the only place you can really see.”

– Leslie Rogers, Assistant Professor at the University of Chicago’s Department of Astronomy and Astrophysics, on why the search for earth-like exoplanets (planets outside of our solar system) is so emphasized.

By Chris Miller and Lysia Filotas

In February, NASA announced that a team of astronomers had identified a nearby solar system with seven planets similar in size to Earth. The system, known as TRAPPIST-1 after the telescope that first identified it, immediately grabbed the headlines because of the possibilities its existence implied. With so many worlds to choose from, surely one or more of them might fall within a temperature range that allowed for the presence of liquid water and thereby become a candidate for hosting life.  And at a distance of only 40 light years away — a mere stone’s throw by galactic standards — the system might be near enough for astronomers to discern signs of a life-supporting atmosphere.

Since the discovery was revealed, expert opinions have diverged on whether any of the planets in the TRAPPIST-1 system are habitable — meaning able to support some form of life.  Perhaps the most important outcome of the find is that it has reignited a deeper debate about what the concept of habitability means in such a system, and where its boundaries lie.

In the TRAPPIST-1 system, all seven planets are very close to the conventional habitability zone, defined as the range of orbit in a solar system where liquid water could exist on a planet’s surface.

When the discovery was made, it seemed like pretty much every planet in the system could possibly house water, oceans, or even life. Astronomers guessed three planets were in the “habitability zone” and the rest close outside. 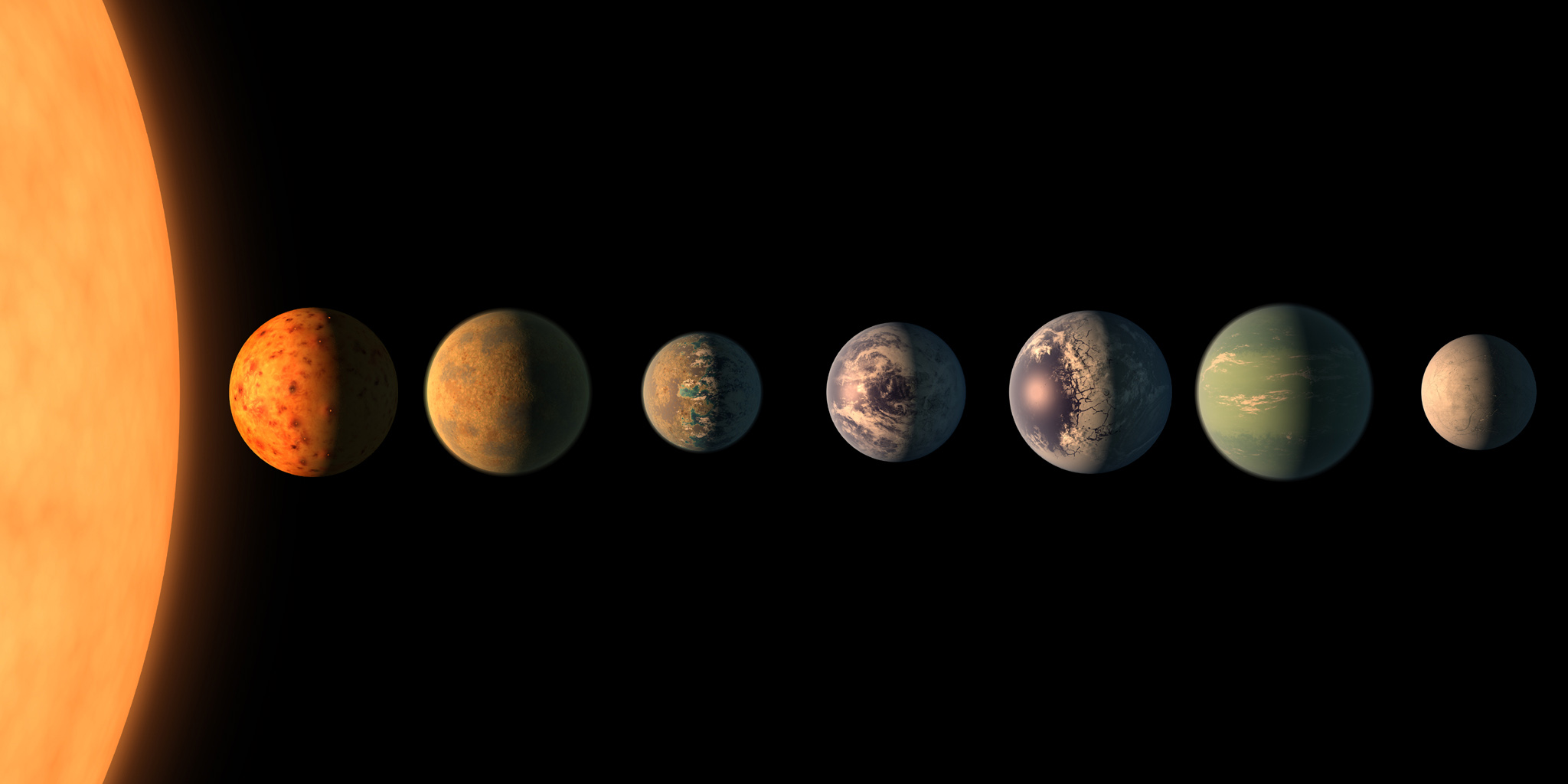 An artist’s concept of what the Trappist-1 system may look like [ Photo courtesy of NASA/JPL-Caltech].

Then, a month later, a study by Eric Wolf from the Laboratory of Atmospheric and Space Physics at the University of Colorado, Boulder suggested only one planet was actually in the habitable zone.

This back-and-forth is a snapshot of the ongoing debate on where habitability begins and ends.

The habitability zone is defined as the range of orbit in a solar system where liquid water could exist on a planet’s surface. It’s also known as the Goldilocks zone – not too cold, not too hot, but just right in temperature. It is an idea that has been around since the 1950s (the term itself wasn’t coined until 1959 by S-Shu Huang, a Chinese-American astrophysicist) and is largely based upon how important water is thought to be for life.

Though every type of planet in every type of solar system has a “habitable zone”, usually when people talk about it they are referring to the habitable zone for an Earth-twin, which is about the distance of the Earth away from a sun-like star. Astronomers look for the range of orbits that could create the right temperature for planets like those discovered in the TRAPPIST-1 system: rocky, Earth-sized and with potential atmospheres composed of molecules like H2O, CO2 or N2. Like so many other areas of exoplanet research, it is very focused on finding life similar to our own on a planet similar to our own; that means carbon-based on a world with solid ground. And it isn’t focused on finding life as complicated as our own. Even bacteria found on another world would count as “alien” life.

When a star and its planets form, they do so out of a collapsing cloud of dust and gas, called a nebula. Gravity pulls the dust and gas together.

The colours in this photo represent different wavelengths of infared light. The region is Rho Ophiuchi, which house multiple nebulae [Photo © NASA/JPL-Caltech/UCLA].

These gases play an important part in planetary habitability by helping to warm the surface of the planets, a process commonly known as the greenhouse effect. Each gas freezes and evaporates at different distances from the star at the centre of the solar system.

For planets with Earth-like atmospheres, the outer edge of the habitability zone is limited by the condensation of CO2 – at a certain distance from the sun, it freezes, and no longer contributes to the “greenhouse warming” of the planet, which lowers that planet’s surface temperature.

But the field of exoplanets is growing fast. Vast amounts of planets have been discovered by missions like Kepler (which itself is a space observatory that surveys  space for exoplanets to determine the different makeups of solar systems). And many of the planets discovered are different from the Earth-sized planets of TRAPPIST-1, at distances further away from their stars.

This has caused scientists to question how planets of different sizes and atmospheres might have surface temperatures warm enough to support liquid water.

Based on some of the data gathered on exoplanets so far, planets come in a variety of different sizes, the most notable of which are Jupiters, Neptunes, Earths and Super-Earths.

Leslie Rogers, a professor at the University of Chicago’s Department of Astronomy and Astrophysics, has studied mini-neptune and super-earth planets to discover under what conditions they might hold water.

She says she got interested in the research after the Kepler survey found that planets between the sizes of Earth and Neptune are very common, and many seem to have atmospheres of largely hydrogen.

“It inspired looking into this question of if you have a planet with a voluminous hydrogen envelope, under what conditions could those planets host a liquid water ocean?”

Most of the universe is hydrogen, yet Earth’s atmosphere does not contain much hydrogen gas (H2). This is thought to be due to how light hydrogen is, and how close Earth is to the sun . Solar winds and higher atmospheric temperatures make reach escape velocity easier.

But for planets with hydrogen gas in the atmosphere, the habitability zone might expand. Hydrogen doesn’t condense, so it can provide greenhouse warming to those more distant stars, even with the lack of CO2 which changes the range of the habitability zone. A planet with a hydrogen envelope can keep temperatures warmer further away from the system’s star, which may give astronomers searching for life more options – according to Rogers, those planets could potentially host liquid water.

There are numerous other ways the habitability zone and the search for habitable planets may be expanded. Even in our own solar system, Europa is thought to have liquid water under a thick layer of ice. NASA has plans to survey the moon of Jupiter to see if it could have the potential to support life. Perhaps there are more moons like Europa in other systems that could house water further out from their stars.

An artist’s concept of a plume of water on Europa, one of Jupiter’s moons [Photo © NASA/ESA/K. Retherford/SWRI].

The range of the habitability zone may extend to even outside of a solar system. David Stevenson, a professor of planetary science at the California Institute of Technology, has speculated that a planet without a star to orbit could stay warm enough to host water with a hydrogen atmosphere and some form of geothermal heat.

“Identifying the presence of a water ocean on a distant exoplanet will in itself by very exciting. But identifying whether or not that planet is actually habited, and not just potentially habitable, is a whole separate question,” says Rogers.

Biosignatures are usually defined as gases in a planet’s atmosphere that are produced by life or byproducts of life.

Rogers says when an atmosphere’s chemistry is not in equilibrium, or not what you would expect, it could mean life exists on the planet.

There are multiple ways to try to “probe” a planets atmosphere for that information, but the one considered most plausible in the near term is through transmission spectroscopy.

The technique can be applied to planets that have orbits that show the planet passing by their host star from our point of view here on Earth. When it passes by the host star, it blocks some of the light seen on Earth. Transmission spectroscopy asks how much light is absorbed at different wavelengths, or colours. At wavelengths where there are different absorbing molecules or atoms, also referred to as absorbers, in a planet’s atmosphere, the planet will appear bigger. Different wavelengths or absorbers will respond to specific gases.

Rogers says transmission spectroscopy has been mostly used to detect compounds of atmospheres of large Jupiter-like planets. Scientists have been able to detect water, carbon monoxide and sodium in their atmospheres. But it is much more difficult to look at smaller planets.

“Right now, I think it’s probably fair to say that unless you are very optimistic, with instruments that are currently online it would be very difficult to detect a biosignature,” says Rogers.

One of the most exciting pieces of the future for astronomers is the James Webb Space Telescope, planned to launch in 2018.

It will be a big improvement on the telescopes currently in use. For those studying exoplanets like Rogers, this is especially true.

“Hubble and the Spitzer Space Telescope have been wonderful for the studies of exoplanets and exoplanet atmospheres, but they weren’t designed for that purpose,” says Rogers.

Of course, the James Webb Space Telescope wasn’t really designed for that purpose either. According to NASA, it’s primary goals are to observe the formations of galaxies, stars and planets in the universe, though searching for exoplanets is still something it will be used for.

But whether it is searching for Earth-like planets under that lamp post, or for other potentially habitable planets somewhere in the dark of space, Rogers says astronomers would need to be very lucky to be able to detect a biosignature with the James Webb telescope.

“I haven’t run the calculations myself, but you might need something like sitting on one of the TRAPPIST-1 planets for months, and it would need to have a whopping signal for you to detect…it is possible James Webb will be able to detect a biosignature, but you would have to be very lucky. The universe would have to be very kind to us.”

Still, maybe the universe will be kind. NASA is planning missions like TESS to search specifically for exoplanets.  TESS is expected to catalog over 1500 planets. If it succeeds along with other missions to find exoplanets, the TRAPPIST-1 discovery may just be the tip of the iceberg, as TESS and future missions may provide many more potentially habitable worlds for the James Webb Space Telescope to check.

It’s a long shot, but if life does exist out there somewhere, whether on an Earth-twin or in completely alien conditions, we may soon be able to detect it.

Why is water at the centre of the habitability zone?

Water is often referred to as the universal solvent. It dissolves many different substances, more than any other liquid, meaning that wherever it goes it brings minerals, chemicals and nutrients.

Ralph Pudritz, a professor at McMaster University’s Department of Physics and Astronomy, says life like our own requires water.

“Experimentally, we know that the driest regions on the Earth also have the lowest microbial cell counts.  So the idea of following the water has a good basis in observations,” says Pudritz.

Because of this, Pudritz says, it is difficult to imagine life that is not based on water as the solvent.

But it is not theoretically impossible that such life could exist; William Baines, among other astronomers, hypothesizes that many chemistries could, even if unlikely, help support or even build life. Possibilities like ammonia substituting for water as the “life solvent” or silicon replacing carbon as life’s “building blocks” are all things Baines has discussed.