The snake with feet

After years of decline, the five-lined skink may be on the long road to recovery in Ontario

From their first encounter, Kristyn Ferguson knew it was love at first sight.

“He was just so shy and curious,” she said reminiscing. “It was a real moment.”

Ferguson, who is the program director of the Georgian Bay and Huronia sub region of the Nature Conservancy of Canada (NCC), says her colleagues had always described a skink to her as a “snake with feet”. She didn’t believe them until she saw one for herself.

But it was the blue tail that made the biggest impression, it was “just not like anything else you see in nature.”

Before working at the NCC, Ferguson had never seen the skink before. In fact, not many people have she says.

For over a decade, while many were unaware of its existence, Ontario’s only native species of lizard had silently been declining. Now it is a species of serious concern or even endangered in some areas of the province.

However, after years of being on the verge of extinction, skink numbers appear to be growing.

Stephen Hecnar, a conservation biologist at Lakehead University in Thunder Bay, Ontario, has researched the five-lined skink for over 20 years. By implementing what he has learned in the field, he and his collaborators have been able to help the lizards hang on in those isolated areas in the province where they are still found and even coax them into repopulating a few places where they had previously died out.

More about Ontario’s only lizard

As their name states, the lizard has five lines running down its body. Juvenile five-lined skinks are easily identifiable with their dark bodies, bright blue tails and yellow lines running down their backs. As they reach adulthood, they fade into more of a brown colouration with the lines becoming more cream.

The species has a larger range than any lizard in North America with a range that extends from the southern portion of Ontario down through the eastern U.S. as far as Texas and Florida.

In 2007, the Committee on the Status of Endangered Wildlife in Canada (COSEWIC) labelled that Carolinian population as endangered, and the Great Lakes–St. Lawrence population as special concern.

Historically there have been 50 individual populations of the Carolinian population, that number went down to 7.

Hecnar notes that most severe drop in that population occurred between 1990 and 1997, stating that it “looked like they were going to go extinct within a year or two.”

Hecnar credits this drop in populations due to their loss of habitat.

“If you look at southern Ontario, we’ve really altered the natural landscapes,” said Hecnar. “We’ve lost a lot of the natural habitat with very intensive agriculture and urban use.”

“That is without surprise where we find most of our endangered species around Canada.”

He adds that the collection and burning of woody debris and driftwood, what skinks commonly use for protection, has also contributed to their decline.

Hecnar has been applying what he and other biologists have learned from studying the skink at Point Pelee National Park to create the kind of habitat it needs to survive. In the areas in which they reintroduced the skinks necessities for survival, he saw a surprising comeback of the species.

He started by determining the kind of ground cover skinks prefer as habitat. The answer turned out to be fairly large pieces of woody debris in a moderate state of decay.

Armed with this knowledge, Hecnar and his team started placing pieces of wood of the appropriate size in target locations.

“We went to areas of the park where there weren’t skinks, suitable open habitat but no pieces of this woody debris cover up that was in the preferred range.  Within weeks [of supplementing wood], skinks would find it and start using it. “

In addition, they had parks change their enforcement policies and prohibit people from clearing beaches of driftwood.

But providing additional cover was not enough, says Hecnar, they had to examine and understand the overall habitat and how it has changed through time.

A look to the past

Looking back at the earliest historical information they were able to see that Ontario was not always forested. Thousands of years ago, following the last ice age, the climate was warmer and drier than today and most of southwestern Ontario was more prairie-like.

As the climate began to change, becoming more moist, forests started to appear. Hecnar says that many aboriginal communities used fire to keep the prairie going as way to manage their food source, but when the Europeans colonized, their fear of fire stopped the practice.

“Our practice of always extinguishing fires that really spread up that process [of forests encroaching],” said Hecnar.

“We would be at a point today where we would have more of a natural mosaic – open habitats, forest patches and savannas – spread all over Ontario if it wasn’t for the past few centuries of our interventions down there.”

Ferguson states that the NCC’s two pillars are securement and stewardship.

The organization first acquires land by accepting donations, purchasing lands or placing conservation easements on the certain areas to ensure that the best pieces of natural habitat in Ontario are protected forever.

Secondly, they steward the land, taking care of it properly according to the historical presence on the site. Meaning, if an area was formerly a prairie they would have prescribed burns to clear it.

In combining the two practices, Ferguson says that the NCC has seen an improvement in skink activity and their overall ecosystem. 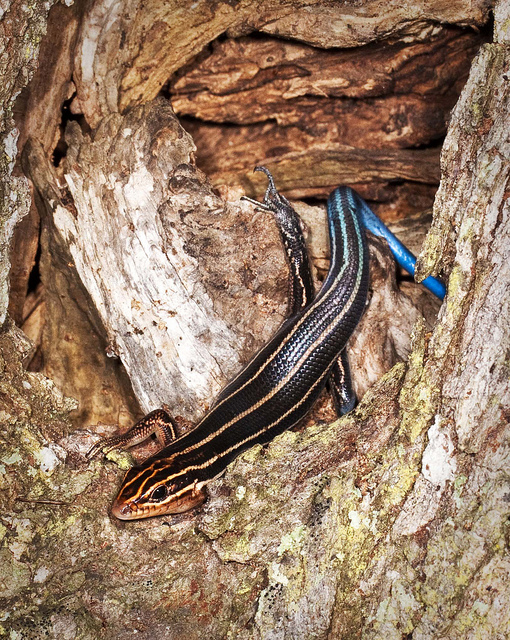 She says it is important that we maintain these ecosystems as their instability could lead to “a domino of unforeseeable results.”

“[Every] species plays a role in the ecosystem that exists from top to bottom, from plants to the smallest insects right up to the top predator.” said Ferguson.

“If you take out a piece of that, you’re inevitably going to lose some of the services that were being provided by that species or also being a food source for some somebody else. You would then see declines in other species.”

According to Hecnar, not only are the five-lined skinks major players in their ecosystem, but they also provide us with the major service of insect control.  The lizard’s main food sources come from invertebrates or arthropods such as spiders and cockroaches.

He adds that  even the smaller organisms that are often overlooked, like the skink, can be playing major roles in the natural operation of these ecosystems.

“These are the same ecosystems that we depend on as humans.” he states. “If we lose them, what else are we going to be losing in terms of the quality of our own lives, even putting the ethical [reasons] aside.”

The lizard is also considered to be a hostile host for Lyme disease. If the bacteria get into the five-lined skink’s system, they are destroyed. They have natural processes of whipping out the bacteria.

Studies in southern U.S have shown the skink is capable of reducing infection prevalence in the tick population resulting in lower incidents of the disease the areas where there are skinks present. Hecnar says that more studies need to performed on the matter however.

COSEWIC reassesses the status of its species every 10 years. According to Hecnar, they are currently in the process of their reevaluating the five-lined skink.

Hecnar adds that since supplementing cover and maintaining habitat has seen positive results, reintroducing the species to certain areas might also be beneficial in the future

“We are getting to that stage where we ask ourselves if we want to try some translocations in the future.” he says. “Going back to these old historic sites and try to bring it back to the way it was before we started to interfere and asking ‘can these species be reestablished?’”

Hecnar believes so, but only with active management from not only scientists but the general public as well.