From antiretrovirals to zombies: Meet the mathematician fighting infectious disease

If you’ve ever wanted to know who holds the Guinness World Record for developing the first mathematical model for surviving a zombie attack, look no further than the University of Ottawa.

Mathematician Robert Smith? — yes, the question mark is part of his name — and three of his students were awarded the honour in 2014 after they created a model that determined how to best contain and eradicate an onslaught of the undead. The model was originally published in 2009 and led to Smith?’s name appearing in news coverage across Canada and the world. (As for that question mark, Smith? added it to his name to differentiate himself from countless researchers with the same moniker.)

But before the media blitz — and the time Morgan Freeman narrated Smith?’s apocalyptic theories for an episode of Through the Wormhole — there was simply a mathematician from Sydney, Australia interested in using math to study infectious disease.

“I loved that you could conceptualize disease,” said 46-year-old Smith? from his University of Ottawa office, where he’s tacked stuffed versions of viruses and bacteria onto a bulletin board. “I was as fascinated by the disease stuff maybe more than I was with mathematics.”

The conceptualizing Smith? is referring to is known as the mathematical modelling of infectious disease. It’s a subset of applied math that involves using equations to predict outcomes like the spread of a disease, how an outbreak might unfold or how to fight an epidemic before it gets out of hand. It’s a particularly useful tool in the field of epidemiology, but Smith? has also used mathematical modelling to study immunology, or how our bodies fight infectious disease. That’s when he first realized he could combine math and public health.

Smith? took his first immunology course at Western University alongside the school’s medical students. He had just finished a PhD in math and was embarking on the first of three postdocs in the second half of his academic career. But as much as he loved the order and beauty of equations, Smith? was more interested in using math to solve real-world problems. One of them was the human immunodeficiency virus (HIV).

“The moment I discovered I could apply [math] to HIV modelling, that’s where I went, ‘Oh! I know what I want to do when I grow up.’” – Robert Smith?

“The moment I discovered I could apply [math] to HIV modelling, that’s where I went, ‘Oh! I know what I want to do when I grow up,’” the professor recalled. “ I was 28 years old. That was a great moment of revelation.”

In some of his earliest work with the virus, Smith? sought to determine how many doses of antiretroviral HIV drugs could be missed before resistance to the drug occurred. He used a mathematical technique that had rarely been applied to disease: impulsive differential equations. The technique involved studying an “impulse” moment (in this case, taking a pill), quantifying how many doses could be missed and finding out how many pills could safely be taken to make up for those that were skipped.

Smith? found that an in-between level of drugs — not too high, not too low — was the danger zone. In this case, a mutant form of the virus would dominate and effectively become a replacement strain of the disease.

“We were basically able to quantify where exactly you find these thresholds,” Smith? explained.

The study represented the nexus of Smith?’s main research interests: mathematics, biology and human behaviour. Over the course of his career, the mathematician has used modelling to study more than 20 diseases and a number of related topics, including the efficacy of various vaccines and best practices for malaria control.

Modelling disease across the globe

Smith? was eventually drawn to studying tropical diseases, like leprosy or sleeping sickness, so that he could focus on illnesses that were receiving less attention. That meant entering into a life of near-constant travel.

“My research has taken me all over the world,” Smith? said, standing up and hiking his jeans above his left calf.

A “scratch map” emerges, black outlines of countries and continents with the places that Smith? has visited brightly filled in. It’s just one of his 10 tattoos, which include a representation of chaos theory on his left bicep and the word “vegan” etched onto his hand.

Smith? has studied rotavirus in Chile, HIV in India and tuberculosis in the Philippines — and that’s just a small sample of his travels. The mathematician barely has a daily routine as a result, particularly during his current sabbatical period.

“I put a lot of work into not having a day in the life,” Smith? joked.

It’s clear from a quick glance around his office: Smith?’s department moved into the University of Ottawa’s new STEM complex in October, but there are still unpacked boxes on the floor of his office and he’s 40 digits off when he tries to recall the room number. 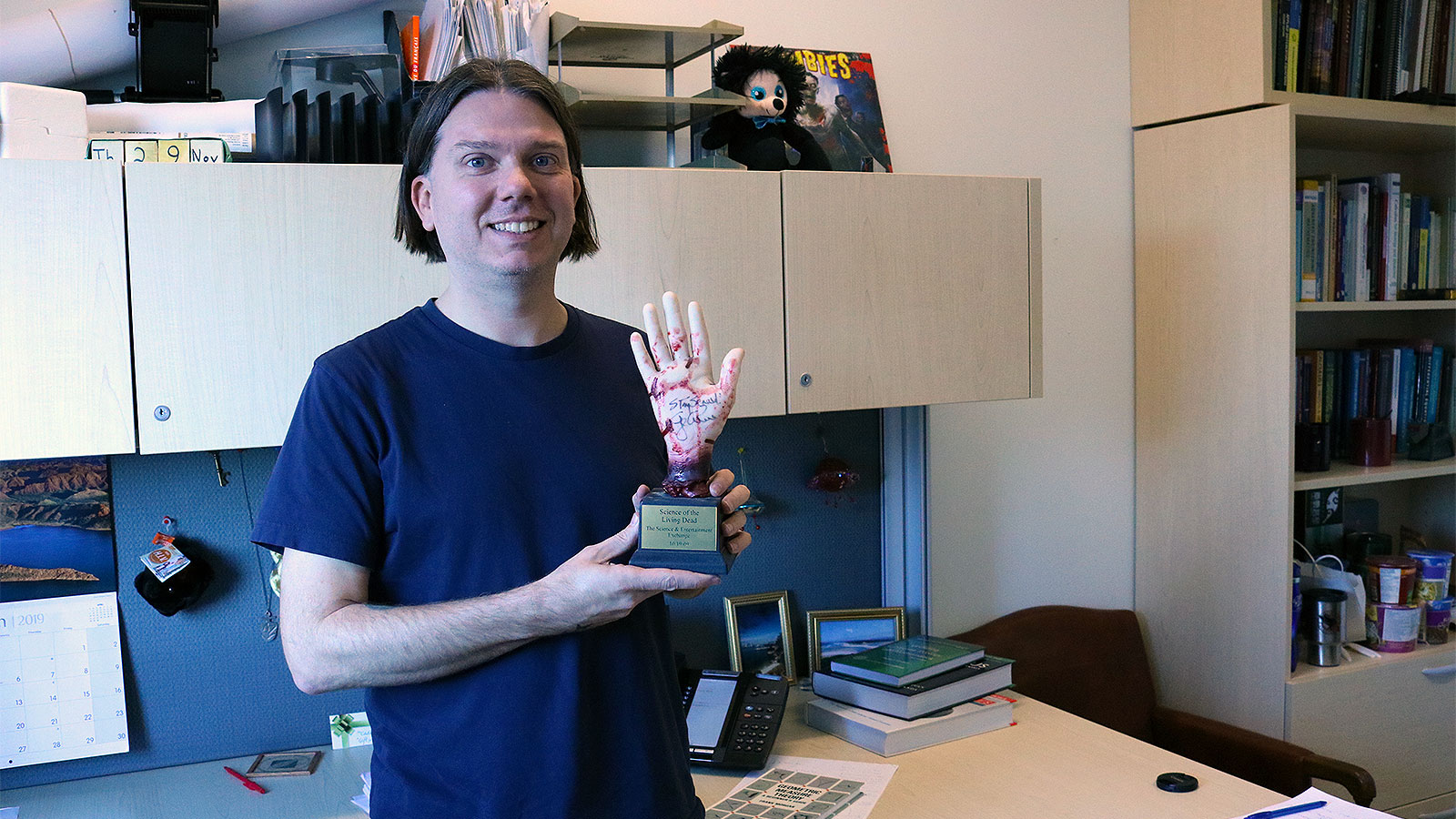 In his office, Smith?, holds an autographed memento of his meeting with George A. Romero, director of the 1968 zombie cult classic Night of the Living Dead. In 2009, Smith? was invited to Hollywood to meet a group of scientists and directors intent on improving scientific accuracy in film. [Photo © Raisa Patel]

“The secret to everything”

When Smith? is overseas, he also makes educating students and other experts a priority.

“I do a mix of working with people locally on various projects and also teaching,” said Smith?, who teaches disease modelling whenever he can. “The more I’ve gone on in my career, the more I’ve realized the sheer value of education in the world. Education is probably the secret to everything.”

University of Ottawa epidemiologist Ann Jolly first met Smith? at a 2007 event that brought together Canada’s public health researchers and mathematicians. When Smith? got a job teaching math at the university that year, Jolly was surprised.

“I couldn’t believe that he wanted a job here,” Jolly said. “I was like, ‘What the heck?’ He could do anything.”

Jolly described her colleague as “creative, imaginative and extremely scientifically rigorous.” This is especially the case, she added, regarding his role as a professor. 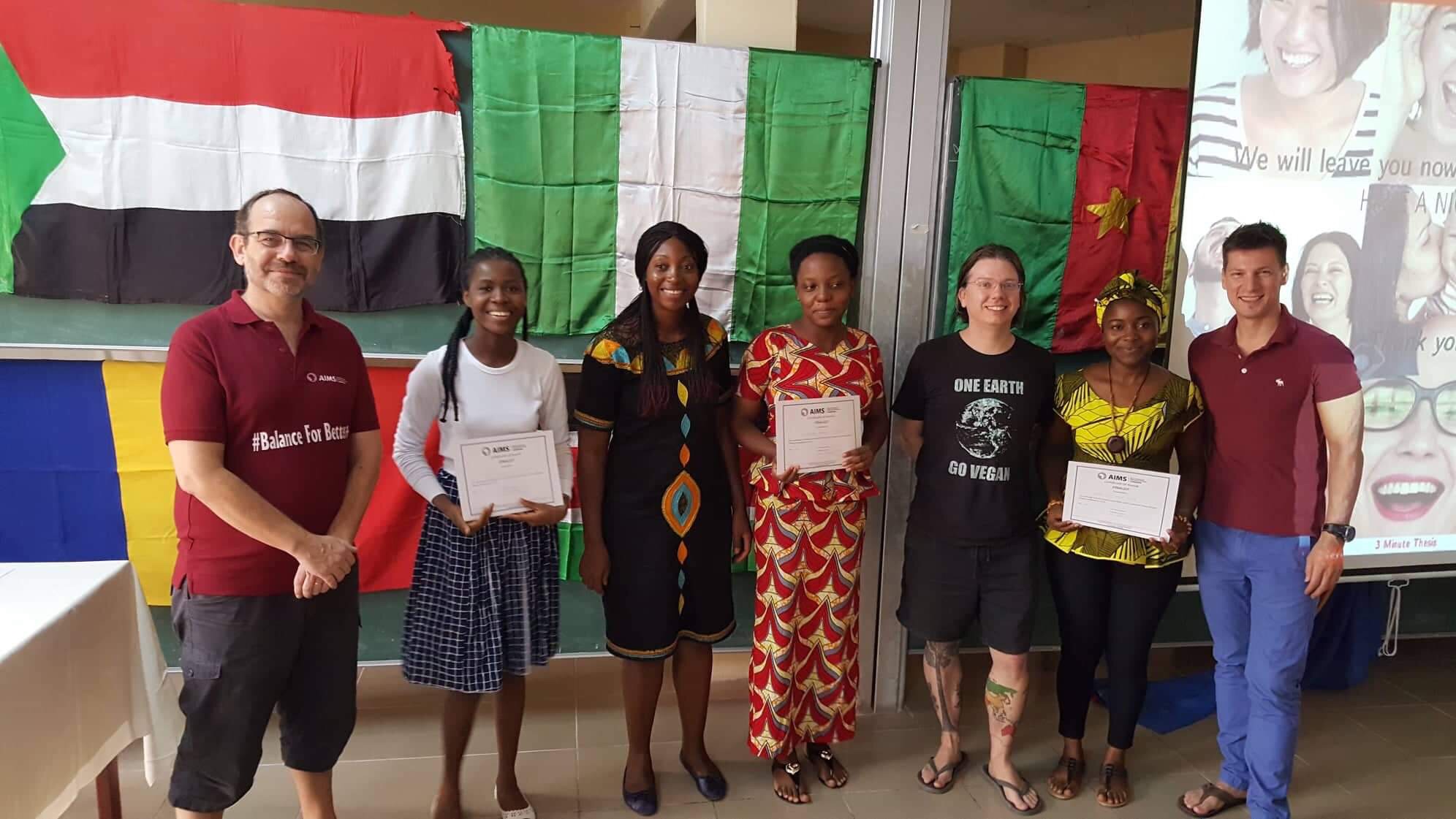 “When you go to his presentations, he makes the most frickin’ complicated math sound logical. You can really apply it. He’s just a fantastic teacher,” Jolly said. The two supervise graduate students together and hope to jointly conduct research on vaccine hesitancy in the near future.

Smith?, third from right, is a visiting lecturer for the African Institute for Mathematical Sciences (AIMS). Earlier this year,  he taught modelling and academic writing for the AIMS centre in Cameroon. [Photo © Jean Riszk]

Smith? assumed he’d become a high school teacher, but taught his first university-level classes in linear algebra and calculus in 2001 during the tail end of his PhD. These days, he teaches a handful of courses ranging from chaos theory to disease modelling.

Emily Thompson, a first-year Master of Epidemiology student at the University of Ottawa, said she’s lucky to boast Smith? as her thesis supervisor. Unlike most advisors, who graduate students are expected to court for supervision, Smith? offered to work with Thompson when he heard she was interested in modelling respiratory viruses.

“He’s very, very prolific. I was really intimidated. If you go on his website, he has so much research and he’s done so much stuff that I was absolutely terrified of meeting him,” Thompson said.

But his approachable teaching style and habit of starting his lab groups by asking students to mention something positive that recently happened to them changed her view.

“I struggle a lot with confidence,” Thompson said, “and I don’t feel stupid around him.”

Besides his welcoming nature, Thompson said there’s something else that makes her professor endearing: the fact that Smith? is a “giant nerd.”

When Jennel Recoskie, Smith?’s girlfriend, first heard that her boyfriend’s research included zombie outbreaks, she was silenced into disbelief.

“My jaw just kind of hung open while I processed what that was. I was like, ‘Really? That’s what you do?’” Recoskie said. “It sounds so different and so amazing than just your regular run-of-the-mill job.”

It’s just a small part of his oeuvre, but studying zombies has been part of Smith?’s research since 2007. During his infectious disease modelling course, a group of his students asked if they could create a model of a zombie attack for a class project.

“I loved it because I’m a pop culture person,” said Smith?, who has also curated books of essays on television shows like Doctor Who, Star Trek and Buffy the Vampire Slayer. “I’d been a science fiction person my whole life. I had an immediate obvious vision that this would be a great class presentation.”

The presentation turned into a published paper on a zombie outbreak model, which found that “only sufficiently frequent attacks, with increasing force, will result in eradication”. Smith?’s intent was always to apply the skills learned from this model to real-world diseases, which is something the professor and his students have accomplished.

“While the scenarios considered are obviously not realistic, it is nevertheless instructive to develop mathematical models for an unusual outbreak,” the 18-page paper noted. “This demonstrates the flexibility of mathematical modelling and shows how modelling can respond to a wide variety of challenges in ‘biology’.”

Recoskie said that so far, she has yet to see Smith? in action, either behind the lectern or presenting on stage. But even so, it’s where she thinks he probably thrives. “He’s in his glory when he’s in front of a group of people and he’s talking about what he passionately loves.”