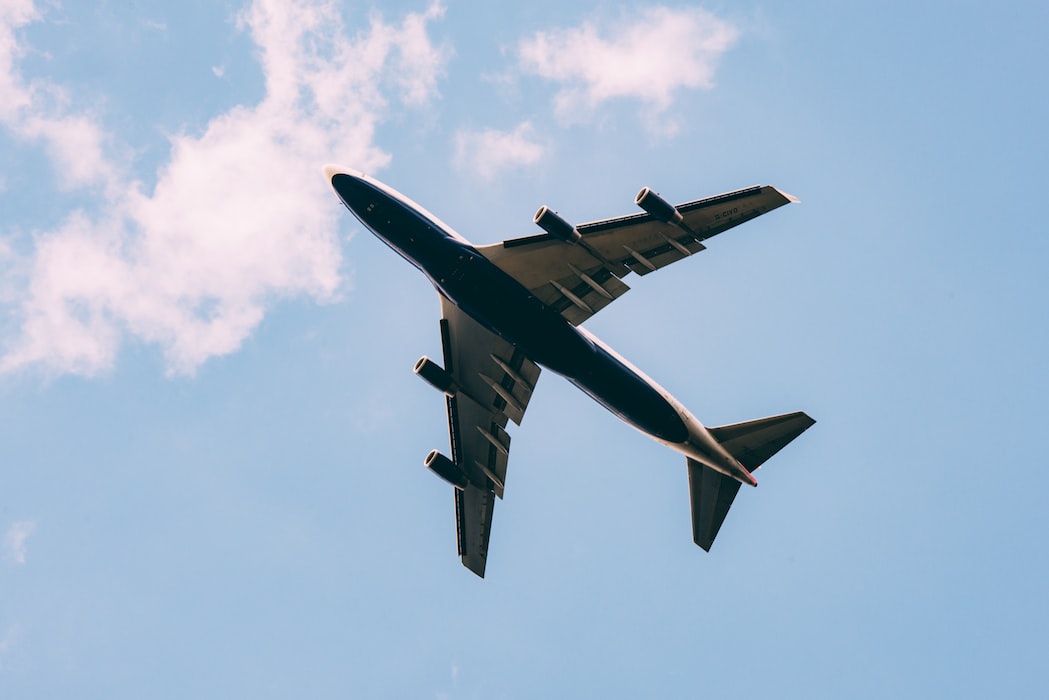 Medical tourism on the rise: why more Canadians are seeking treatments abroad

The Fraser Institute released data showing more Canadians are leaving the country for medical care. But what does this mean for Canadians going abroad, and for the medical system at home?

By Kristian Kelly and Arianna Paquette

As winter rages on, many Canadians are booking flights to get away from the snow and relax abroad as tourists. But for some Canadians, the decision to leave the country isn’t out of a desire to get away — it’s a medical necessity.

There are a variety of factors pushing people overseas for medical treatment: Canada can have long waiting lists, high expenses for procedures that aren’t fully covered by provincial healthcare plans, and it lacks many experimental treatments.

The websites run by medical tourism agencies or facilitators advertise to a specific clientele: people interested in travelling outside their home country for treatments or surgeries, otherwise known as medical tourists. These travellers can seek out a variety of treatments abroad — everything from dental work to plastic surgery, and even experimental stem cell treatments. 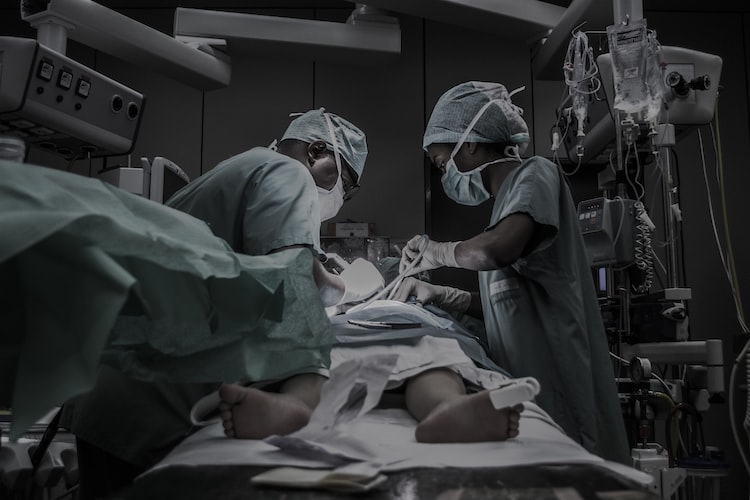 Patients may travel abroad for a variety of different surgeries, including cardiac surgery. Image by Piron Guillaume, via Unsplash.

Becoming a medical tourist is simple: people arrange their out-of-country treatment and travel, either through these medical tourism agencies or on their own. In Canada, there is no government intervention or regulation for medical tourism.

“If I want to hop on a plane to Mexico tomorrow and get bariatric surgery, there’s really no limitation on that, no tracking of the numbers, no regulated follow up care,” said Jeremy Snyder, a health sciences professor from Simon Fraser University in Burnaby, B.C., in a phone interview It’s a well-worn myth that universal health care is one of the pillars of Canadian identity, along with hockey and maple syrup. Many Canadians take pride in the country’s publicly funded health-care system.

But the number suggest a growing counter-narrative. Increasingly, Canadians are voting with their passports and deciding to seek treatment elsewhere.

If I want to hop on a plane to Mexico tomorrow and get bariatric surgery, there’s really no limitation on that, no tracking of the numbers, no regulated follow up care.

A 2017 study from the Fraser Institute shows that 2016 marked a sharp increase in Canadians leaving the country for medical care. In 2015, nearly 46,000 Canadians were medical tourists, whereas in 2016, this number increased to nearly 64,000. Since the think-tank’s study began in 2014, the number of Canadian medical tourists has been increasing steadily. This increase has raised ethical questions — not only concerning Canadians travelling abroad, but also surrounding the potential impacts on destination countries and the Canadian health-care system. 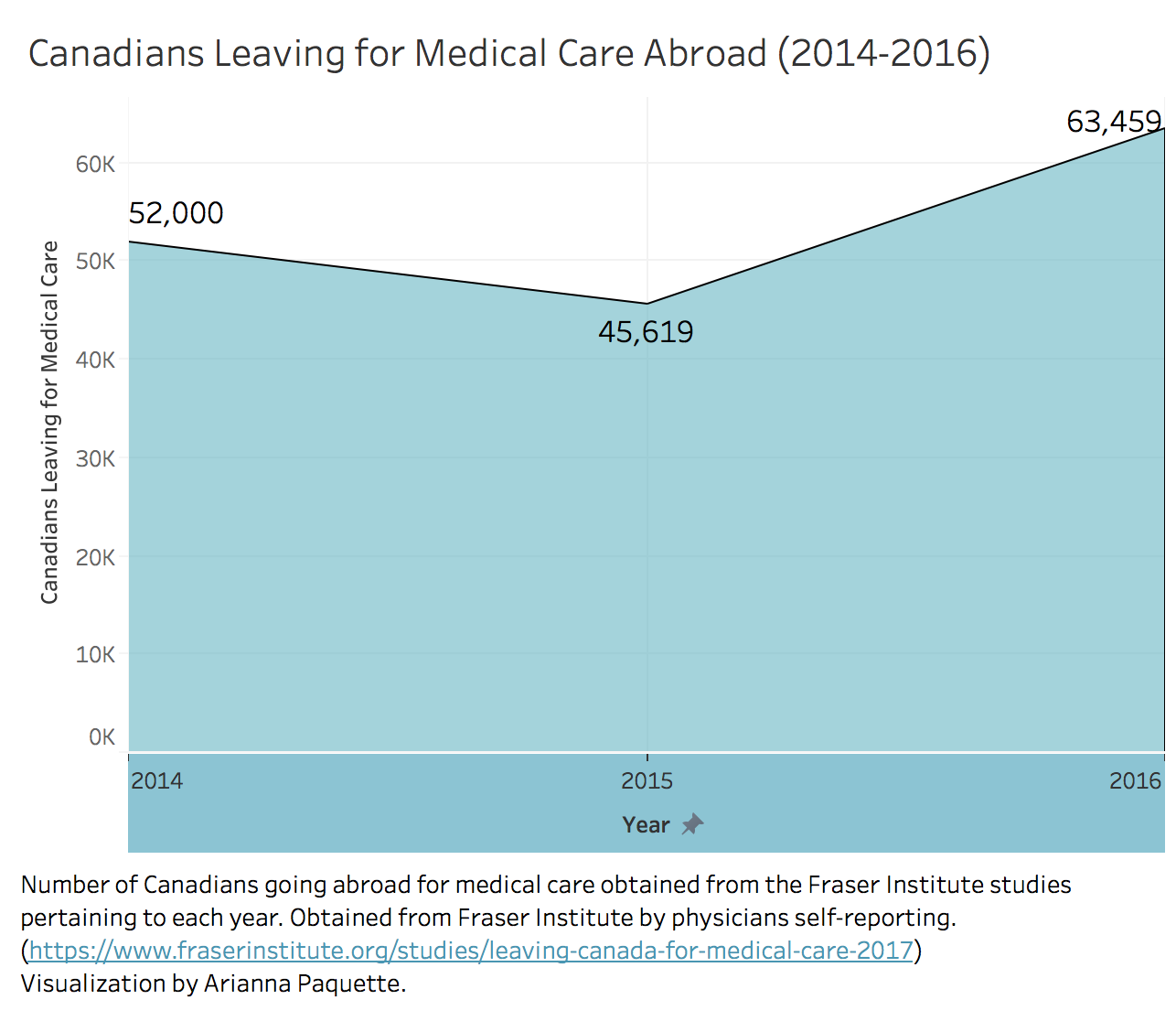 Medical tourism isn’t a new. People have been going to different places for care since the ancient Greeks and Romans — but this has mostly been people going to more economically developed countries.

As Snyder explains, developing countries such as India, Thailand, and Mexico have only recently become popular destinations. In some cases, medical tourism means people coming from other countries to Canada for treatment. But a large number of Canadians also travel abroad for medical care.

The reasons Canadians choose to become medical tourists vary, but Snyder says it’s mostly due to cost, care that’s unavailable or illegal in Canada, or wait times. Raywat Deonandan, a professor of health sciences at the University of Ottawa, says that medical tourists might target countries with certain specializations. Brazil, for example, specializes in reconstructive surgery, whereas Turkey is best with eye procedures, he says.

An interactive map showing popular medical tourism destinations, with a list of their specifications. Visualization by Kristian Kelly.

Deonandan says it’s a misconception that medical tourists are rich people who go to other countries to relax on the beach and buy care that lower-income people can’t afford.

“Often, it’s desperate people who are going into debt to get this thing done that they need,” he said in a video response to questions.

Deonandan says there are generally two types of medical tourists: those who are price-sensitive seek less expensive treatment, whereas those who are quality-sensitive dish out more cash to get superior or unavailable treatment, or to avoid wait times.

Data on Canadian wait times, and what percentage of patients are treated within the acceptable “benchmark” standard. Data obtained from the Canadian Institute for Health Information.

Bacchus Barau, the associate director of health policy studies at the Fraser Institute, explains that one of the major reasons Canadians might seek treatment abroad is long wait times in the Canadian health care system. Barau notes that wait times vary within the country, with Nova Scotia and New Brunswick being some of the worst provinces to wait, and Quebec and Ontario being some of the best.

According to Ontario’s Ministry of Health and Long-Term Care, the average Ontario patient stayed in emergency for 5.3 hours in January 2018. The average patient waited 63 days between being referred and their first surgical appointment.

But Barau said in a phone interview that, as a whole, Canada has remarkably long wait times. According to a Fraser Institute report authored by Barua, in 2017, Canadian health care wait times were the highest in over 20 years. The average wait time was 21.2 weeks between referral and necessary treatment. Barau notes that other countries around the world with universal health care, such as Switzerland and Germany, still have better wait times than Canada.

“Canada is routinely at the bottom of the pack,” he says.

The wealth differences between Canada and most destination countries has led to concerns about lack of informed consent, which is when a medical tourist doesn’t completely understand the risks, benefits, or effects of a potential treatment. Without informed consent, Canadians might not fully understand what they’re getting into by becoming medical tourists. Many Canadians go through medical tourism agencies to book their trips, but Snyder says Canadians should be wary of these agencies, which are biased.

An advertisement video for a medical tourism agency in Ukraine.

“On the clinic websites they’re extremely positive, they’re much more in the style of advertising,” Snyder explains. “Very few references to any risks or concerns that might be attached to medical tourism.” He says he has also heard from patients who were promised a discount on their treatment by a clinic if they posted about their experiences.

A video testimonial by a medical tourist from Ottawa, ON, who received bariatric surgery in Cancun, Mexico.

If all the information that they’re getting is biased and one-sided, it can be difficult for Canadians to make a fully informed decision to become a medical tourist. Additionally, lack of intervention and regulation of medical tourism from the Canadian government can make the choice to travel abroad for care difficult.

The federal government says that Canadians who choose to receive medical care abroad are “on your own if you decide to do so,” but warn of different health standards in other countries. The government also doesn’t track the number of citizens who go abroad for treatment, or offer any follow-up care for patients.

Snyder says if aftercare isn’t in place, then a patient’s success with a treatment might be worse. Even if a patient does receive aftercare upon returning to Canada, there are still potential problems.

In a 2016 study of medical-legal risks of medical tourism, the Canadian Medical Protective Association notes patients often “return home with incomplete or no clinical documentation of information” about their foreign procedure. Medical tourists may not fully understand or have documentation to explain their procedures and so they might not get appropriate care once back home, which can cause ripple effects in the Canadian health-care system and lead to even longer wait times.

Researchers have expressed concerns about the ethical dilemmas caused by high-income Canadians going to destination countries that are usually underdeveloped.

International patients bring lots of money into these countries, and this might mean the foreigners are able to afford better private medical care than the locals who fund the public health care.

He notes that in reproductive tourism, where tourists sometimes go to lower-income countries for fertility treatments or surrogacy candidates, informed consent can be complicated.

Not only do surrogates from less wealthy countries have less of a choice, as they’re poor and need to make money, Deonandan also says the relationship between the doctor and the surrogate — their country, sex, age, and education — can all compel or coerce informed consent.

“There’s a power dynamic there that really complicates the soup.”

In some cases, the provincial government might actually help pay for medical expenses abroad.

In Ontario, the Out of Country Prior Approval program provides funding for “medically necessary” OHIP insured services while abroad, said David Jensen, media relations co-ordinator for the Ministry of Health and Long-Term Care, in an email.

Jensen notes the program is not meant to provide access to international treatment when the same treatment exists within the province or when the treatment is not scientifically established, nor to enable queue-jumping.

But even with this program in place, not every medical tourist qualifies. For those whose out of country treatment isn’t funded, their money isn’t going into the Canadian health-care system.

Although many medical tourists pay out of pocket for their treatment abroad, when they return to Canada, any health problems they experience from post-treatment complications are now the burden of the Canadian health-care system.

The fact there is no tracking of medical tourism by the federal government is part of the reason some researchers, including Snyder, are critical of the medical tourism data presented by the Fraser Institute.

“There aren’t any good numbers out there, so I guess you could say it’s better than nothing but I’m not sure that’s true,” Snyder says.

He adds that although the study seems very precise, the numbers were self-reported by physicians. Since physicians don’t record information on medical tourism, these data could be unreliable. For example, people don’t always talk to their family doctors before seeking treatment abroad, for fear of discouragement.

But Barau notes since the government doesn’t track these numbers, there’s no perfect way to collect data. “There is no way to accurately do it other than literally asking every patient who’s travelling abroad for treatment whether they actually received it,” Barau says. He says that the numbers presented in the report provide a rough idea of what’s happening, although it may even be an underestimate of how many Canadians travel abroad for care.

Snyder says he hopes that eventually, there will be more resources and unbiased information about medical tourism available for Canadians, allowing them to stay safe and healthy not only during their trip, but also when they return to Canada. In the interim, the Fraser Institute’s report draws attention to some of the issues with and for Canada’s universal health-care system, as well as the ethical issues involved with medical tourism.

Deonadan says he finds it “problematic” when it’s less expensive for a Canadian to travel to and temporarily live in another country to get a surgery done, rather than getting the same treatment at home.

“Medical tourism opens up or allows us to examine some of the failings in our system,” he adds. “If you have to travel abroad to seek services, then we are doing something fundamentally wrong here and under-serving the people who have to go abroad.”

Medical tourism opens up or allows us to examine some of the failings in our system.