Sales of lab grown food products move forward despite concern around some ingredients.

By Natalie Pressman and Jackie Bastianon

A lab technician examines a piece of lab grown meat up close underneath a microscope in the Pelling Lab at the University of Ottawa [Photo courtesy of Pelling Lab Media].

As the world becomes increasingly aware of the global, long-term impact of their choices, consumers are pushing for more ethical and environmentally sustainable products. One of the industries looking to take advantage of this trend is cellular agriculture, or lab-grown meats.

Lab-grown meat consists of meat cells, derived from animals but grown in a petri dish rather than being cut from a live animal. The industry is aimed at people looking to make more ecologically-friendly or cruelty-free choices, and who just can’t give up their appetite for flesh.

Some industry advocates predict lab meat might be on supermarket shelves within five years. They argue that lab meat is an ethical and environmental solution to factory farming. They suggest that by moving agriculture into the lab, the industry can cut down on greenhouse gas emissions, land coverage, and energy consumption, as well as avoid the harsh conditions of slaughterhouses.

But not everyone is convinced that lab meat achieves all these goals—and least not yet. A lack of transparency about the processes for making lab meat is concerning to Andrew Pelling, a University of Ottawa scientist researching lab meat. He warns that the lab meat industry has some major problems to address before going mainstream—issues with the source of ingredients used to make lab meat that he said are not being properly disclosed to the public.

“I think these startups, and anybody with a commercial interest in these companies, needs to start being very transparent about what they’re expecting us to put in our bodies,” Pelling said. “I don’t think that’s an unreasonable request as a consumer.”

The biggest issue, according to Pelling, is a compound called fetal bovine serum, or FBS. This serum is what enables meat cells to grow in a petri dish, but the problem lies in the way the solution is sourced. It comes, he said, from cow fetus blood.

“To get cells to grow you need to actually kill cows and abort a fetal calf,” said Pelling. “You kill the mother, you kill the baby, you suck the blood out of the fetus and you feed the cells this blood.” 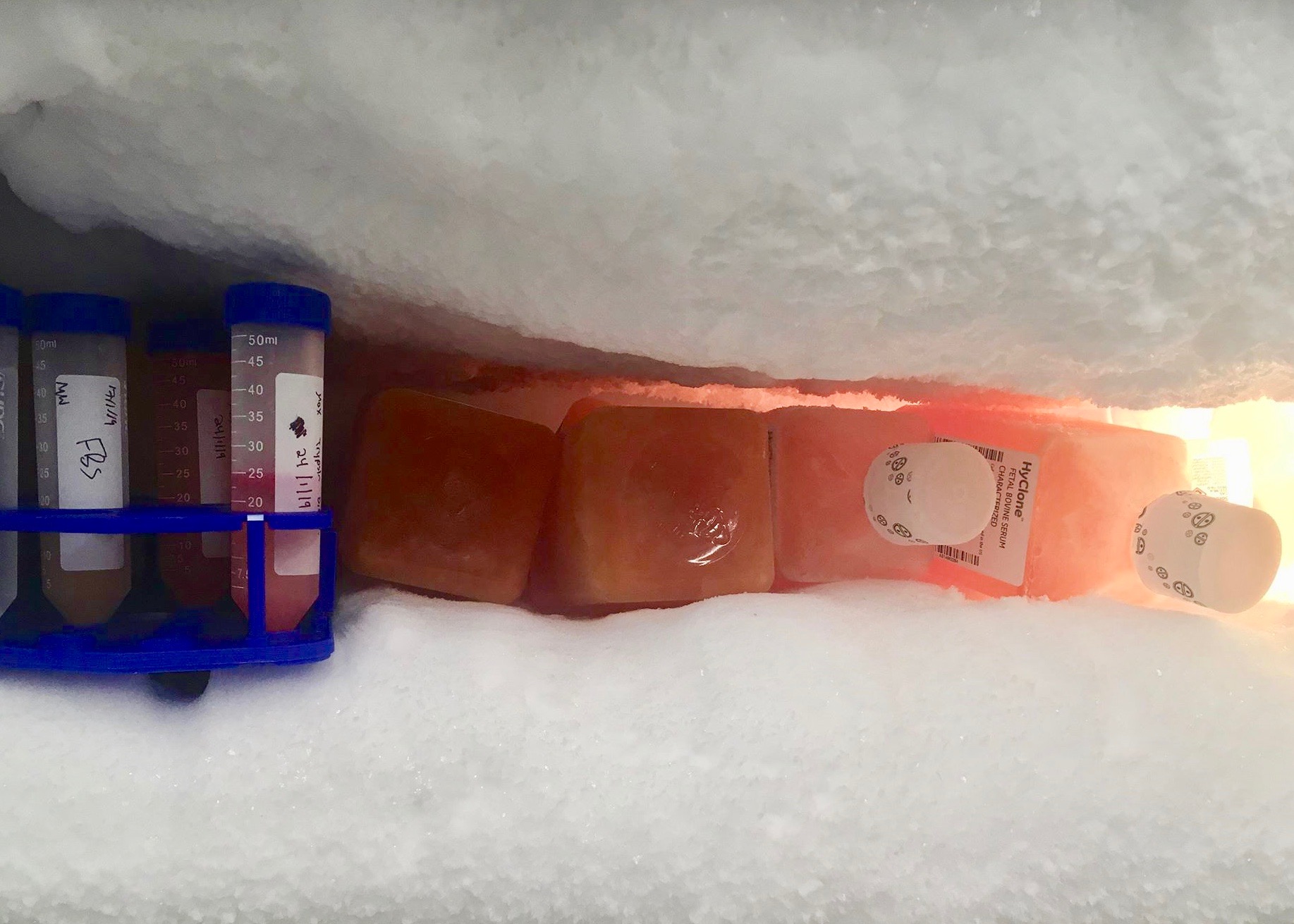 The fridge in the Pelling lab at the University of Ottawa is stocked with bottles of fetal bovine serum (FBS). This is one of the most critical, but controversial ingredients involved in the creation of lab grown meat. [Photo ©️ Jackie Bastianon]

Devang Mehta, co-author of the Massive Science Report on lab-meat, and post-doctoral researcher in plant genetics at the University of Alberta, described FBS as a mystery elixir for growing lab meat.

“FBS is pretty complex chemically and it also varies from batch to batch,” he said.

“We don’t exactly know which parts of FBS are required to grow the cells. It would be quite challenging to replace [FBS] right now, at least with the current knowledge that we have.”

Despite global research, details of FBS are not openly displayed on company packaging or websites. For Pelling, that lack of clarity is alarming.

“I think it’s just so easy to get bought into all the hype,” he said. “I think these companies and researchers have a responsibility to be transparent. There’s a lot of marketing lingo out there now that I find very misleading.”

In addition to FBS, Pelling said producing meat cells requires large quantities of antibiotics to kill the bacteria growing alongside it.

If consumers understood the extent to which the meat is pumped with antibiotics, levels much higher than factory farming, he’s doubtful it’s something they would want to eat. For Pelling, discussion is the key to finding solutions: His research, funded by New Harvest, which is a donor-funded research institute dedicated to the field of cellular agriculture, aims to find ways around producing lab meat with FBS and high quantities of antibiotics. For now though, he can’t get other labs to talk about their processes.

“It bothers me because I’ve been to the conferences, I’ve visited the companies, I ask the question all the time, and the answer I get back is deflections and statements about there being intellectual property so we can’t tell you what’s in it,” he said. “If you want me to put it in my body, then you’re going to have to come clean and tell me what’s going on here.”

Despite the question marks surrounding FBS and antibiotics, “there are some companies that claim that they have come up with some alternatives that may work,” Mehta said. “So we’re going to have to wait and see what those are.”

Advocates of the industry, like Matthew Ball, media relations specialist for the Good Food Institute (GFI), acknowledged that there is still work to be done but said that lab-grown meats could be available sooner than we think — possibly as early as five years from now.

“There are still challenges that need to be overcome to be able to produce clean meat at scale and at a competitive price point, but the industry is moving much more quickly than any of us had thought,” said Ball.

GFI is an American nonprofit that promotes animal agriculture alternatives through science, research funding, and corporate partnerships. According to Ball, FBS is a problem the industry has already solved, although he says he is unable to reveal details for proprietary reasons.

JUST is a San Francisco-based start-up that creates chicken products from the animal’s feathers.

According to the JUST’s website, these cells are collected and grown in labs to recreate chicken breast that looks, tastes and smells like conventional meat without killing any animals.

Company representatives from JUST declined a phone interview and did not answer questions over email about the process and details of their products, despite multiple requests. Likewise, company Memphis Meats, who describe their product as “sustainable cultured meats” also declined to comment on how they grow their product.

“Given what I know about what’s in these products and how I see these start-up companies avoiding the question of FBS as much as possible–is this something that I want to put in my body and in the bodies of my children?” Pelling said. “For me, the answer is, “Absolutely not.””

Although Pelling thinks that alternatives to factory farming must be found, he remains unconvinced that the solution currently lies in cellular agriculture. Despite researching the area himself, he is not convinced lab meat can be sustainable if taken to industrial scale without further advancements.

“I would rather just be vegan, or raise and kill my own animals than use this as a [environmental or ethical] solution right now,” he said.

According to a special 2018 report from the Intergovernmental Panel on Climate Change (IPCC), the world’s current methods of meat production is not environmentally sustainable.

Yet the general public seems unlikely to adopt veganism widely, said industry advocate Ball. “The evidence seems to indicate that all the efforts to get people to not eat meat, or to eat less meat has not been working. So if you want there to be less environmental degradation, less animal cruelty, it’s better to try something different than continue to work on the demand side of things.”

Despite a general understanding of the impacts of factory farming and of increasingly available plant-based alternatives, most consumers are hesitant to adjust to more environmentally sustainable lifestyles such as veganism, which involves abstaining from the use of any product produced from an animal.

“We’ve tried the consumer side, we should try the supply side,” he added. “If you look at the United States’ agriculture data, you see that the meat consumption per capita is about as high as it has ever been, and it’s expected to go much higher,” said Ball.

“The process of lab grown meats does not require the same land coverage as farming, or release the extensive levels of greenhouse gases,” Ball said.

He cites a 2017 poll conducted by non-profit The Sentience Institute. They surveyed over a thousand U.S. adults and found that about two-thirds of respondents were uncomfortable with how animals are raised, and almost half wanted to ban slaughterhouses. Despite the public’s discomfort with the way meat is sourced, the study suggested only about one per cent of the population are actually vegetarians.

“These are people who eat meat, and who are uncomfortable with how the system is currently producing the meat that they’re eating,” said Ball. “The facts on the ground are that people are going to eat meat, lots and lots of meat. But the statistics show that people have significant discomfort with how meat is currently produced and that’s why there is so much excitement and so much interest into new ways of producing the meat.”

As consumers seek more environmentally-friendly and animal-friendly sources of meat, the lab-grown meat industry could be a panacea or a Pandora’s Box—depending on who you ask.