Being in nature: The health benefits of spending time outdoors

Being outside can bring more than just beautiful photographs. Researchers have found that it can also

By Alison Trenton and Evelyn Myers

There are many places throughout Ottawa that parents can take their children outside to connect with animals and nature, like the Canada Agriculture Museum where children can get up close to farm animals. [Photo © Evelyn Myers]

Michael’s life changed forever when he was five.

On that transformative day, Michael’s older sister and a neighbourhood friend were in their playhouse laughing and having tea, while Michael lurked outside.

With his rowdy spirit, Michael suddenly barged into the playhouse, destroying the tea party and infuriating the girls.

Instead of disciplining him, his neighbour’s mom took Michael by the hand, sat him down and began pointing at the birds decorating the trees in her backyard.

And from that day, Michael knew that being outside with the birds was where he belonged.

Now one of Canada’s top naturalists and a biology professor at Carleton University, Michael Runtz said everyone should incorporate spending time outdoors into their lifestyles.

His opinion has a basis in science. Being out in nature can improve our health in many ways over a person’s entire life, said Paul Heintzman, an associate professor in health science at the University of Ottawa.

These benefits range from an increase in physical health to improvements in social, mental and spiritual well-being. In fact, some researchers studying these effects argue that exposure to nature is essential part of maintaining a healthy lifestyle. Getting kids outside from a young age is particularly important, said Heintzman, because it can affect a person’s attitude towards nature later in life. This helps establish lasting habits that people can rely on for years to come.

Most people associate the physical benefits of time outdoors with an opportunity for a workout – or so that a child can get rid of their seemingly unending energy. But time outdoors can help people fight other physical ailments.

“People have greater cardiovascular health when they’re closer to nature,” said Sam van Ginkel, a master’s student in psychology who takes part in John Zelenski’s nature and happiness lab at Carleton University. Evidence for this comes from a 2018 study published in the Journal of the American Heart Association, where researchers calculated risk using biomarkers measured from blood and urine samples. The study shows that living in green spaces is associated with a lower risk of stress and diminished cardiovascular disease.

Balancing the brain with time outside

In February 2019, a study published in the journal PNAS showed that researchers at Aarhus University in Denmark conducted one of the largest studies investigating the connection between mental health and the outdoors.

The researchers discovered that growing up near wildlife is associated with a lower risk of mental illness and psychiatric disorders in adulthood. Through a combination of satellite imagery to analyze the Danish population’s health and demographic data, Kristine Engemann, a biologist, showed that spending time outdoors decreased the number of adolescents diagnosed with psychiatric disorders.

Green space is of course, just one influential factor in mental health, according to the study. Other factors also contribute to mental health, including family history of mental illness, socioeconomic status and urbanization. For instance, families who can afford to live in neighborhoods with large backyards and more access to parks have additional resources that can positively affect childhood development.

Mental health aside, there may be additional benefits linked to spending time outdoors.

Spending time outdoors can also help those who are diagnosed with learning disabilities focus such as Attention Deficit Disorder (ADD), said Runtz. “For children who have ADD like me, there’s so much for them to see in nature.”

The constant sights, sounds and movements that can be found in nature create an important stimulation to help keep children engaged and focused, he added.

This is a four-part theory that suggests being outside restores your intellectual capacity, through a change of environment letting people get away from everyday stresses.

This refers to the sense of being separate and apart from   your usual thoughts and concerns. This can mean being psychologically detached from your present worries and demands, to distract yourself from the environment that is draining your energy.

This refers to the quality of the restorative environment. It  encourages you to feel engaged because the environment doesn’t have any unexpected features, making you feel comfortable and at ease.

This refers to the feeling of enjoyment in your environment. To meet the restorative requirements, an environment must be one the individual chooses out of intrinsic motivation or personal preference. People are more likely to restore their intellectual capacity when doing something that fits with their interests.

The argument for socializing outdoors

Evidence also suggests that people get social benefits from time in green space. That’s because time outdoors greatly affects the way people interact with each other.

How people interact with others can also be impacted by being outside because “people who spend more time in nature tend to be more extrinsically motivated,” said van Ginkel.

Research suggests that people who spend more time in nature, even just for a short period of time, tend to be more cooperative in tasks where they have to share, or can be more likely to help someone or donate to charity, he said.

In February 2015, a study published in the Journal of Environmental Psychology by Zelenski found that participants who were exposed to nature videos responded more cooperatively on a measure of social value orientation. This suggested that exposure to nature promotes higher levels of cooperative behaviour.

Researchers have also found that not only can nature improve a person’s connection with others, it also strengthens their relationship with themselves.

The benefits of being outside may reinforce a person’s spiritual belief because it becomes an environment they find special since they might believe it was created by God, Heintzman said.

This could be because when they’re in God’s creation, they feel they have a stronger sense of who God is as a creator. Or, it could just be a sense of awe or wonder that inspires them, he said.

Even with other beliefs, including atheistic ones, as humans “we have a natural connection to the natural world,” Heintzman said.

Despite the differing reasons that connect people to spending time in nature, Runtz believes the benefits they receive make the outdoors an inviting atmosphere.

“Once children are exposed to it, they’ll want to spend more time in nature,” he said.

Being out in nature helps motivate people to engage in environmentally beneficial behaviours later in life, said Heintzman.

“We’re dependent on the natural world so I think we should be aware of it and interact with it,” he said.

Improving mood and attitude with nature

Beyond improving a child’s connection to the outdoors, researchers have found that spending time outside can affect how a child feels overall.

Several studies have shown that when kids are in green space or were recently in green space, they report their moods as happier, said van Ginkel.

One such study originates from Carleton University, where Zelenski and Raelyne Dopko in the Psychology Department investigated the moods of children who spent the day in nature compared with those who spent the day at the Canada Aviation and Space Museum, he said.

Their study found that spending time outdoors increased the positive mood of children. The researchers note that spending time in nature also brings many of the same psychological, social and environmental benefits to children as it does to adults.

However, they noted that children can experience negative moods outside too. For example, some of the children were afraid of running into a bear, snakes, or wolves.

Likewise a child could be experiencing emotional turmoil because their feet got wet and they don’t like that, but there was still an overall increase in positive mood, van Ginkel said.

Nature is an inviting atmosphere where people are able to see so much more when they train their mind to it, said Runtz.

“Children are very curious beings and nature is full of curiosity. Let them explore,” he said. 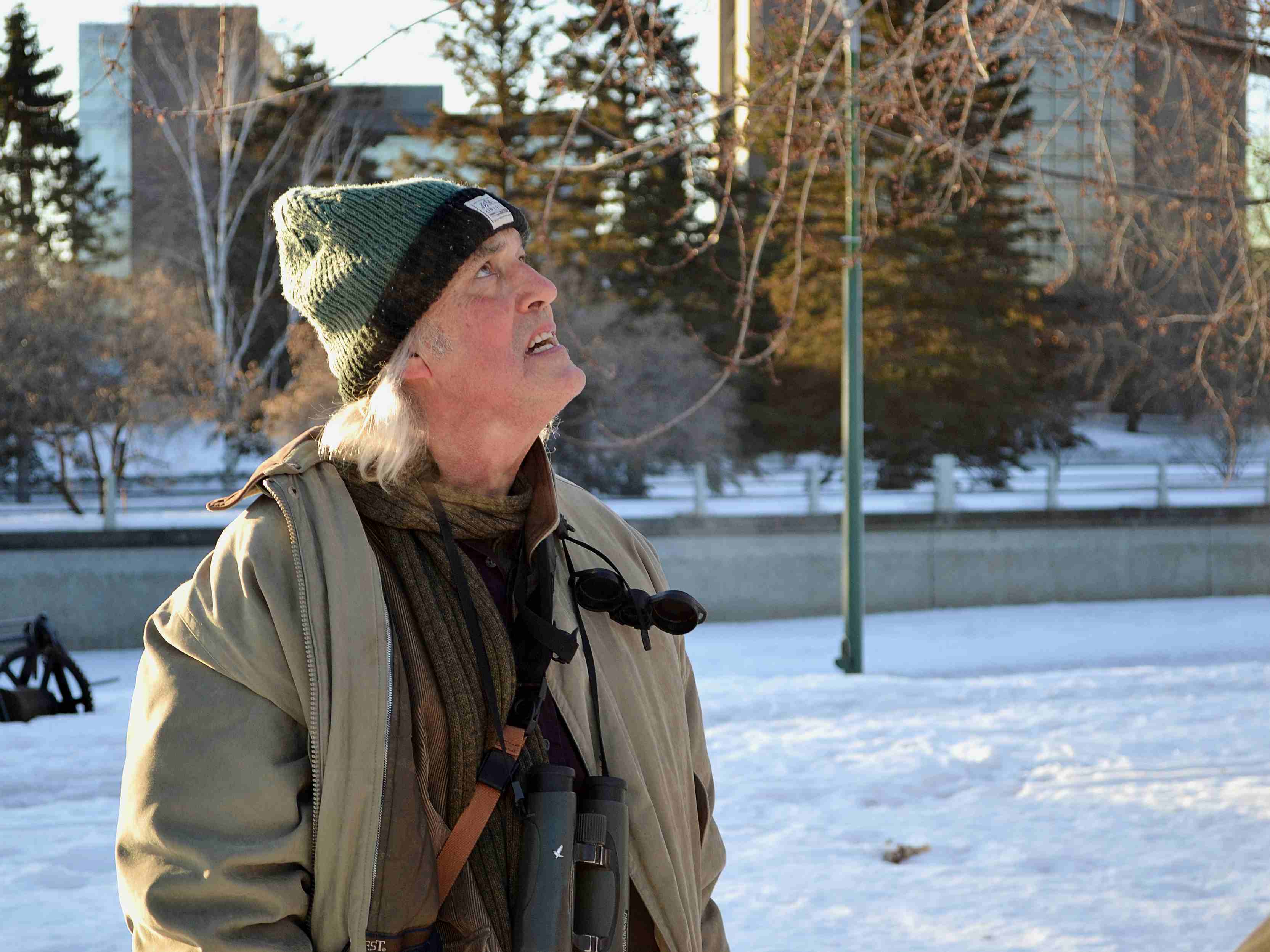 According to Michael Runtz, shown here, spending time in nature brings a reality check to people. It shows people how our actions can affect the space around us and bring awareness. [Photo © Alison Trenton]