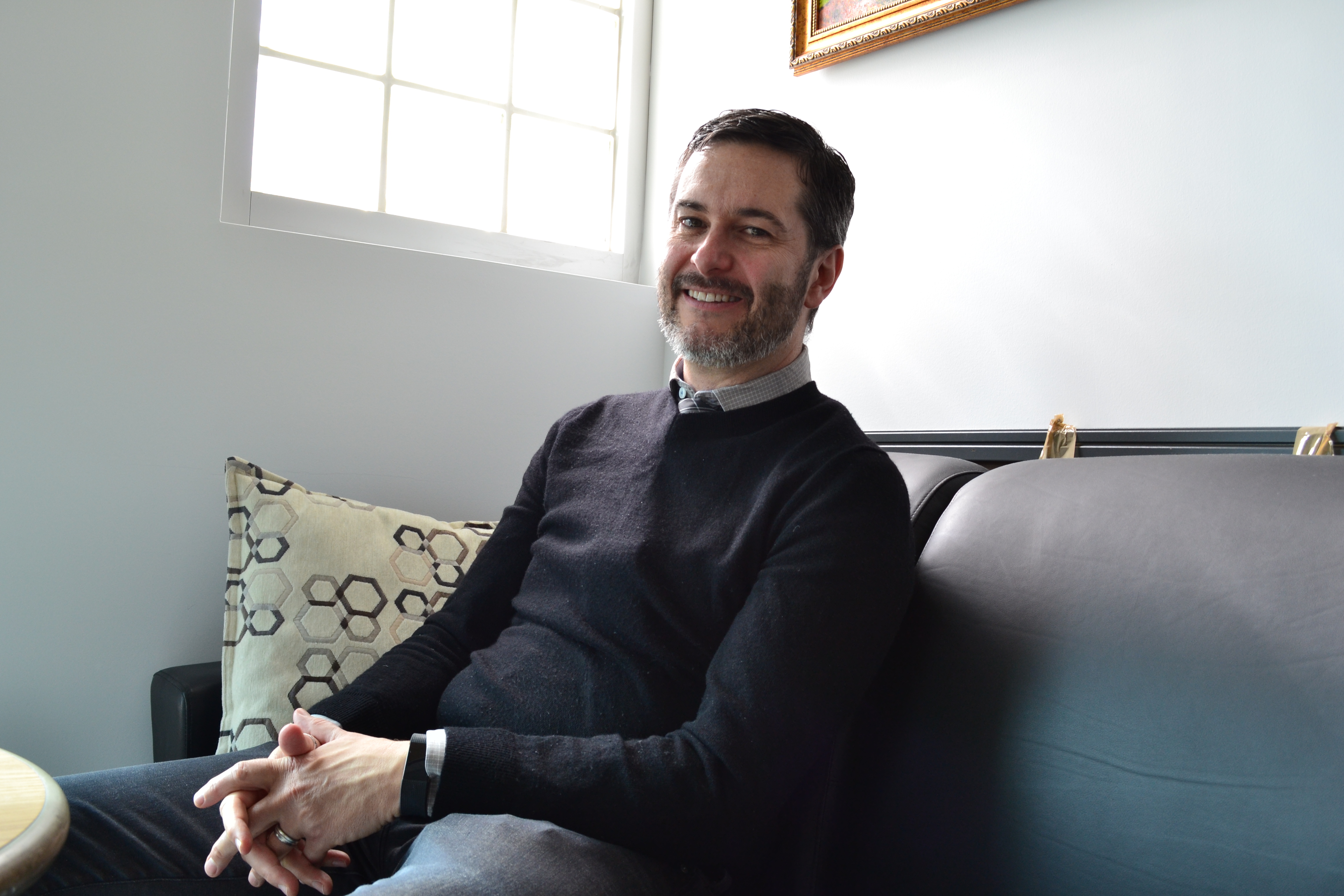 By his own admission, Dr. Ian Colman didn’t even know what epidemiology was when he graduated from the University of Waterloo in 1994.

“I became an investment banker, and I hated it — I was really miserable,” said Colman. “And I thought, oh my goodness, what am I going to do with a degree in math?”

During the off-hours from his job on Bay Street, Colman started researching graduate degrees at the Toronto reference library. He read hundreds of books, leaflets, and prospectuses, trying to find something that interested him and involved statistics.

“I found a book that was aimed at high school students, by the Centers for Disease Control, and the very first line of that book was ‘Epidemiologists are like disease detectives,’” says Colman. “And I thought, ‘Oooooooohhhh… I’d like to be a disease detective!’ No joke, from that day forward, I decided I wanted to be an epidemiologist.”

Today, Colman is considered one of the world’s top disease detectives in the domain of mental health.

That niche area is mental health epidemiology, or the study of how and why human beings get mental illnesses. Back in 2000, says Colman, mental health was still an incredibly taboo subject — suicide most of all. Colman’s graduate supervisor in Alberta, a noted suicide researcher, inspired him to keep focused on mental health, despite the questions and whisperings from classmates.

“What I thought was, this is an area that is massively misunderstood and under-researched, because people don’t want to talk about it. But somebody’s gotta step in,” says Colman.

While much of the research in the field concerns genetic predisposition — for example, if your mother has anxiety, you are more likely to have anxiety — Colman’s team is focused on “modifiable factors”, or what people do that causes mental illnesses to develop or worsen, and what they can do to prevent them.

According to Colman’s research associate Dr. Mila Kingsbury, their work is all about catching problems before they even develop.

“We’re coming to realize that prevention might be a lot more effective and cost-effective than intervention, once symptoms have escalated,” said Kingsbury. “If we can get there early, hopefully we can prevent a lot of suffering.”

Coyle agrees, adding that Colman’s work raises important and specific questions about mental health challenges rather than simply documenting them.

“He’s looking at issues like teenage suicide and saying, ‘Well, what could we do better?’” said Coyle.

While best known for his work on teen suicide contagion, Colman has more recently been digging into the mental health effects of a far earlier time in life: gestation.

Mining the data from Bristol University’s Avon Longitudinal Study of Parents and Children, commonly referred to as ALSPAC, Colman and his team found that stressful life events during pregnancy — getting fired, a family illness, a pet dying — can increase the risk for that child to have clinical depression, hyperactivity and conduct disorder in adolescence and adulthood. Colman’s team found a link to depression in 2016. More recent work, published January of this year, showed a similar relationship to hyperactivity and conduct disorder.

According to Colman, much of his work on prenatal stress is based on a theory that came about in the 1980s, known as the “fetal programming hypothesis”.

“There was a doctor and an epidemiologist called David Barker who had linked hospital records in Hertfordshire, and found that people who showed up in the hospital with heart disease in their 60s were more likely to have been small babies,” says Colman. “So he proposed this theory, the “fetal programming hypothesis”, saying that when bad things happen to a mom when she’s pregnant […] the message her hormones are going to send to the fetus is that this is a really nasty environment you’re about to be born into, and the fetus is ‘programmed’ for that nasty environment.”

While previous studies have mostly focused on the physical health aspects of fetal programming, Colman decided to test out its relevance to mental illness, using the ALSPAC dataset.

The obvious question on the mind of many moms may be how much stress is dangerous for baby, but Colman says that’s hard to determine.

“There is a dose-response relationship,” says Colman. “Basically, the more stress you’re exposed to the more likely you are to be affected by that.” Getting laid off from one’s job, for example, will affect a mom, and therefore her fetus, much less than having one’s husband die. Context also has to be taken into account; divorce can be traumatizing, or it can be freeing. And some moms have the capability to cope better than others, just by their individual personality.

While Colman can easily explain the conclusions his team makes, it’s more difficult to say how he got there. Much of Colman’s work is hard to understand, and even harder to explain; part of his job is being a mathematician, after all. Essentially, though, by looking at huge datasets, asking questions, isolating the information that pertains to those questions, and doing some number crunching, epidemiologists like Colman can find trends that might otherwise be missed — disease detectives spotting patterns in a sea of anonymous, chaotic numbers. With those trends discovered, epidemiologists focused on modifiable factors — like Colman — can make suggestions to public health officials, policymakers, and everyday people on how they can mitigate their risk factors and become healthier.

That policy-forward focus on modifiable factors, says Coyle, is one of the reasons Colman is such a fantastic epidemiologist. When bureaucrats understand exactly what needs to be done to solve an issue, it’s a lot easier to get them to do it.

“His research is very high-quality, and has a policy-friendly aspect to it, which encourages the uptake of the research,” says Coyle. “Therefore, it can have a much bigger impact than it would otherwise.”

Kingsbury says Colman’s focus on modifiable factors is one of the reasons she was so keen to join his team.

“Nobody likes a bad news story that says, ‘If you’ve had this happen to you, you’re kind of screwed,’” says Kingsbury. “We don’t like the bad news stories unless you tell us there’s something we can do about it. Like, this has increased your risk, but if your kid gets more exercise, or reads more books, or has really enriching social experiences, we can really turn it around for them.”

Although Colman’s University of Ottawa coworkers praise his work, there have been challenges. Namely, stigma from colleagues in his early career.

“At the time, there weren’t a lot of people studying mental health. It was very taboo,” said Colman. “When my classmates found out that I was going to work with a suicide researcher, they said, ‘I can’t believe you want to work on that project.’”

Colman says his suicide contagion study, done with fellow epidemiologist Dr. Sonja Swanson, created some tricky situations with journalists. Colman and Swanson had to be particularly careful to avoid sensationalizing, stigmatizing, or — worst of all, says Colman — accidentally being flippant about a life-or-death study.

“I think if I worked in a different field, it would be a lot easier for me to be glib during interviews. But we’re usually talking about relatively serious subject matter,” says Colman.

Swanson, now an epidemiology professor at both the Harvard T. H. Chan School of Public Health and Erasmus University in Rotterdam, Netherlands, says Colman taught her a lot about interacting with reporters.

“To be honest, I was just a graduate student at the time of conducting the study. I relied heavily on Dr. Colman’s experience and expertise,” says Swanson.

According to Colman, one of the more common criticisms of his work — and one he has personal experience with — is the idea of determinism and mom-shaming.

“I can see how people could interpret these findings as saying, ‘Mom’s gotta cope better,’ and pregnant women have enough on their plate without having to think about coping with stress,” says Colman. “I used to hear a lot about whether this is too deterministic.”

“My wife was in a car accident when she was five months pregnant with our first child. Does that mean that our child is marked for life?”

Colman and Kingsbury say no. A supportive environment and good parenting can fix nearly any mental malady that fetal programming instills, and their most recent project, an online depression calculator, is trying to show Canadian parents just that.

Colman’s team has applied for funding for the project, which would allow parents of eight to 10 year olds to fill out questions about their children, and be provided with a ranking of how likely their child is to develop depression in adolescence. The calculator would also list some of the most effective behaviours those parents could implement to lessen their child’s risk, based on how they live their life currently.

Colman himself is a father to two children. He says his kids are one of the biggest inspirations to keep moving forward, challenging the stigma on mental illness, and trying to find ways to help Canadians improve their mental health and the mental health of their children.

“I think it’s unrealistic to think that we’re going to suddenly find a cure for mental illness,” says Colman. “But at the end of my career, I just hope that I’ve made some small contribution towards that.”