Roaming the range: Is climate change forcing one Canadian bison herd to leave its sanctuary?

By Bianca Chan and Lindsay Campbell
As the lakes in northwestern Canada mysteriously drown the surrounding vegetation, a critical herd of wood bison remain at risk.

Rising waters linked to climate change are having an unforeseen impact on Canada’s largest land mammal — not the gaunt, perpetually-swimming polar bear, but the grazing giant of the boreal forest, the wood bison.

In the Northwest Territories, one population of wood bison, struggles to find food in its core habitat as the landscape experiences unprecedented flooding.

As small lakes in the protected region continue to grow in surface area — in one case by more than eight times since1986 — the Mackenzie wood bison herd has found itself forced out of its best habitat in pursuit of other less suitable places to live and graze. It is Canada’s only remaining genetically-pure and tuberculosis-free bison herd and its survival is considered vital for the recovery and conservation of the entire species. 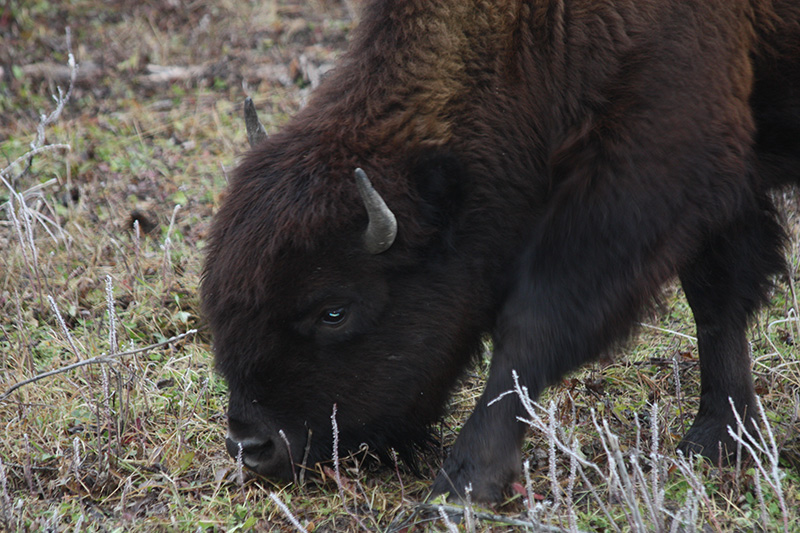 Grazing is one of the wood bison’s ecological contributions to its ecosystems [Photo courtesy of ENR, GNWT/Terry Armstrong ©].

The at-risk herd inhabits a sanctuary of approximately 20,000 square kilometres that ranges from the Mackenzie River on its southwestern edge to the community of Behchoko to the north and Yellowknife to the east. According to a study published in the journal Nature Communications in February, the proportion of land covered by water in the the Great Slave Plains and lowlands ecoregion of southern N.W.T., where the Mackenzie sanctuary is, has doubled since 1986. This prompted the team to suspect climate change as a main driver behind the extensive flooding.

“We’re talking about a landscape that is undergoing rapid changes as a result of climate warming.” – Jennifer Korosi, environmental scientist

She says that water levels are intuitively connected to precipitation and temperature, “but again it does seem to be something beyond that…some hydrological aspect that isn’t captured when you look at temperature and precipitation alone.”

A history of fluctuation

Terry Armstrong, a bison biologist with the N.W.T. Department of Environment and Natural Resources says the Mackenzie herd is critical in maintaining and growing bison populations in Canada. “There are relatively few bison left in the world and the Mackenzie population is one of those,” he said. “We really can’t afford to lose any wood bison populations if we’re going to try to recover the species,” Armstrong continued.

The Mackenzie herd makes up a critical share, nearly 20 percent, of the approximately 4,200 free-ranging, disease-free wood bison in Canada, according an Environment Canada wood bison recovery strategy document released last year. Wood bison are dominant grazers and through their eating habits, they create spaces for other species to live, Armstrong said. “They are good at transferring energy from plants to animals to predators.”

As far as recovery goes, Armstrong said, the Mackenzie herd was the first that was re-established in an effort to recover and conserve wood bison populations in Canada. At one point it was the largest free-ranging, disease-free wood bison herd. Wood bison are especially prone to endemic diseases including bovine tuberculosis and brucellosis. “This is largest threat to wood bison recovery today,” Greg Wilson, a government wildlife biologist, wrote in an email.

Since the establishment of the Mackenzie Bison Sanctuary in 1963, wood bison populations have been fluctuating. During the mid- to late-1980s, the expansion of lakes in the sanctuary paralleled a rise in bison-vehicle collisions as some bison moved west towards Highway 3, which connects Yellowknife to communities further south. Others have moved southeast towards other disease-ridden bison populations in Wood Buffalo National Park. Though, most bison, Korosi said, seem to be moving northwest.

“Since the 1990s, water levels and lake sizes in that area started to increase and it flooded very important habitats for bison – the main grazing habitats that were shallow, formally-dry lake basins,” Armstrong continued. “Once those basins became flooded and grazing areas became unavailable for bison, we think it caused two things: bison to start moving out of the sanctuary in greater numbers and the second is we think it caused them to go in a slow decline.”

In Environment Canada’s Recovery Strategy, flooding has reportedly impacted about one quarter of the Mackenzie herd’s population in the past and can potentially lead up to a 50 per cent herd mortality.

Korosi says this area is one of the few that show flooding in a landscape where drying lakes and drought-like conditions are more common.

Wilson, who works for Environment and Climate Change Canada and Canadian Wildlife Service says the Mackenzie is the only herd facing the threat of lake expansion and flooding. Other herds, such as those in Wood Buffalo National Park, face the opposite problem. “Herds in the Peace-Athabasca Delta area range used to face annual flooding, but the reduction in flooding periodicity has resulted in a change in ecosystem, where invasive thistles have become more prominent,” Wilson said. As the weed infestations continue to replace the natural willows and shrubs, the ecosystem has lost a valuable ecological element that stabilized shoreline soils and provided dens for small mammals and nesting habitats for birds. 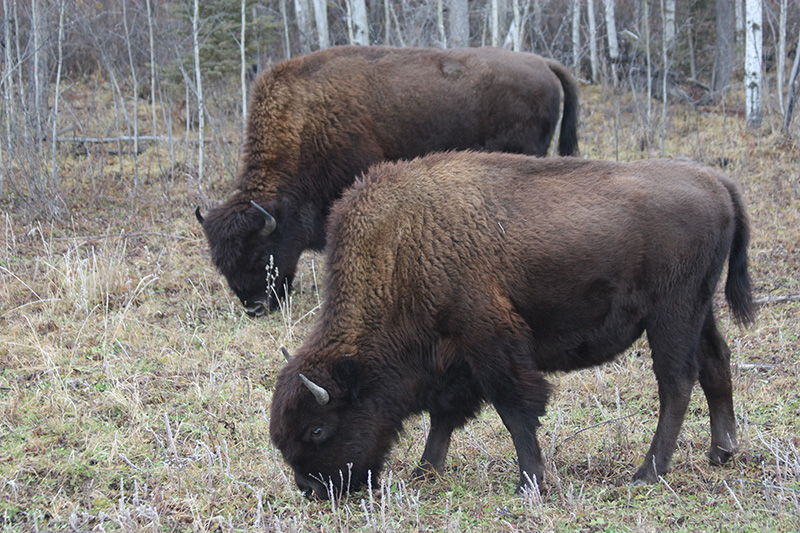 The wood bison is the largest land mammal in North America. It only occurs in the wild in Canada and there are an estimated 5,000 to 7,000 mature individuals that live in nine isolated, wild subpopulations. They have large triangular heads, brawny shoulders, and a long dark Mohawk-style hairdo. [Photo courtesy of ENR, GNWT/Terry Armstrong ©].

Searching for answers in lake sediments

Jules Blais, a professor of biology and environmental toxicology at the University of Ottawa, was one member of the research team tasked with seeing if these changes in lake composition were part of a cyclical pattern of lake flooding and drying or whether the current situation is unprecedented. By taking sediment cores from the lakes, the team was able to reconstruct how lake compositions and the environment have changed over time.

“The sediment cores were analyzed for lignins, which are organic molecule produced exclusively and unambiguously by terrestrial plants,” Blais said. He and the team were able to predict that if flooding occurs, causing lakes to engulf forests, then you would expect an influx of these lignins in the sediment profiles. This is because the terrestrial landscape, including trees and other land plants that produce these lignins, would end up – and show up – in the lake sediment cores.

“There was a sharp increase of these lignins corresponding with the 1980s, when we know the lake expanded because we can see photos,” Blais said. However, by using the lake sediment cores the researchers were able to go further back to see if this had happened in the past. “We found that this increase in lignins was recent and unprecedented in the past several hundred years that was recorded in the sediment profile.”

“This evidence produced a link between what we are seeing in this region in terms of climate warming and the changing physical environment and flooding,” Blais said, which prompted more research into the climactic variables causing flooding, a phenomenon that is not well understood.

Korosi says this is the first study of its kind, though more research is needed to know the different mechanisms that contribute to the freshwater flooding. Some predictions include more precipitation and an increase in river discharge, though Blais says he suspects more than just increased rainfall at play.

The team is working with permafrost specialist Steven Kokelj, who maps the thaw scars in the Mackenzie delta. Blais said they are hoping to see how land subsidence from thawing permafrost may be influencing lake expansion in the area. “But the short answer is we are not sure about that,” he says.

“The northwestern part of North America is one of the most rapidly warming places in the world,” Blais said. As the interactions that take place between different climactic variables is complex, he said they’re “just starting to figure it out.”

Few management strategies targeting flooding have been introduced by the government of the N.W.T., though strict hunting quotas of wood bison and tactics that restrict diseased and disease-free herds from expanding beyond their borders have been established. The Environment Canada wood bison strategy document says much research – necessary for more informed management strategies – is underway in regards to disease management, vaccines for bovine diseases, forage availability and bison habitat.

For now, we can see that in other areas of the sanctuary that are drying out in response to the drought-like conditions, Korosi said, bison are moving back home. As recent records show how variable conditions can be in the regions, the changes that are underway will mean that climate will have to play a more significant role in conservation planning.

Lake sediment cores are used as proxy archives of decadal trends of lake surface area. Lake sediments gradually fall to the bottom of the lake, while the more recent sediment cores remain at the top. As you go further into the sediment profile, you will have deposits that were laid down several hundred years ago.