The Geography of Disease: How researcher Manisha Kulkarni is mapping health in Ottawa 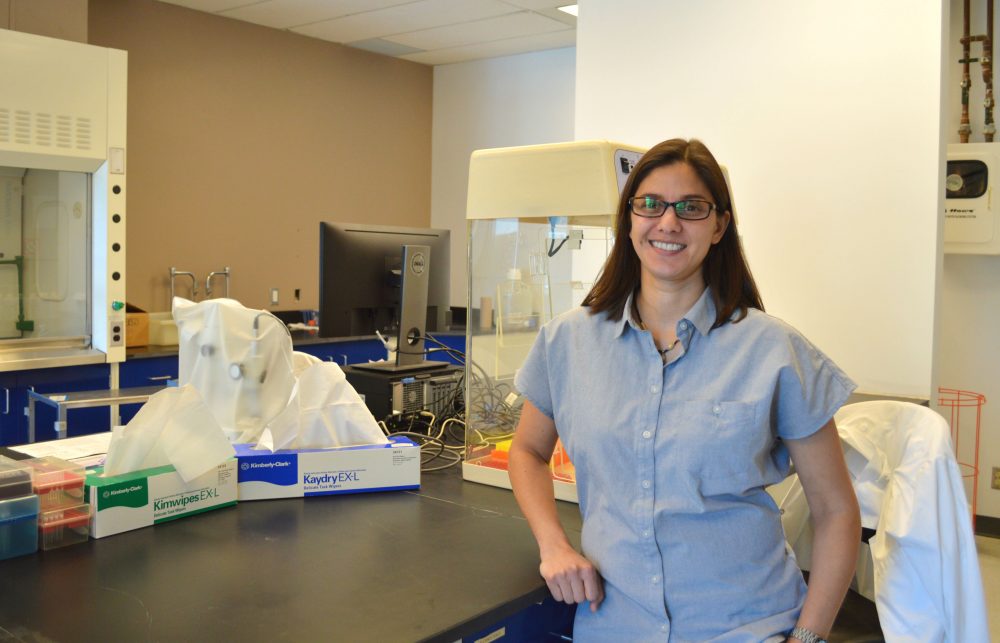 Manisha Kulkarni pictured in her University of Ottawa lab, where she studies tick specimens and vector-borne disease.

Open up the standard map function on a smart phone and you’ll find a backdrop crisscrossed with thick and narrow lines for streets and major roads.

Zoom in further, and buildings and other landmarks pop into view. This is the functional geography that the internet provides at the tap of a finger.

But when health researcher Manisha Kulkarni looks at a map, she sees another landscape – one that is marked, not with bus stops and restaurants, but with the transmission patterns of infectious disease.

In a plain, beige office building, located just east of The Ottawa Hospital’s General Campus, there is a lab that is dedicated to creating multi-dimensional maps like this.  The lab is called the Interdisciplinary Spatial Informatics for Global Health or the INSIGHT lab, and is led by Kulkarni.

Kulkarni is a spatial epidemiologist, a researcher who studies how geography can be used to model the transmission patterns of infectious diseases.

The field of spatial epidemiology looks at the relationship between interdisciplinary data sources, such as data that is gathered from a region’s weather station and the population demographics of the region.  This data is then combined to identify common factors that may help or hinder the transmission of infectious disease in the area, such as malaria in regions of central and southern Africa.

The concept of mapping comes in because Kulkarni’s work can visually show where infectious disease is having an impact versus where it’s not, and why that is.

“It (geography) really is the root of epidemiology, looking at place and time of where disease is happening,” says Kulkarni. “By looking at the characteristics of the environment, we can identify what the factors and determinants are of disease transmission at a given location.”

Kulkarni, aged 39, is an assistant professor in the School of Epidemiology, Public Health and Preventive Medicine at the University of Ottawa. Her research specializes in vector-borne diseases, principally Lyme disease and malaria.

Vector-borne diseases are infections transmitted by an infected arthropod, like ticks or mosquitos.

According to Charles Thickstun, an MSc Candidate and student of Kulkarni’s at the University of Ottawa, this type of research is “brand new.”

“There’s a geographic element to health issues that hasn’t been explored in a lot of places.  There are a few labs that they are sort of starting to address it but the geo-aspect of health has been set aside by a lot of programs,” says Thickstun.

Using geographic information to pinpoint disease isn’t an entirely new concept.  In 1854, British physician John Snow, was able to locate the source of a cholera outbreak in London by marking cases of the disease onto a map.  But, what makes Kulkarni’s work different than her 19th century counterpart’s, is her addition of new 21st century technologies to more traditional concepts of infection.

Geographic information systems or GIS, are technologies that allow for a multi-dimensional analysis of geographic data and have allowed for the concept of geospatial modelling to “take-off” within the last 10-15 years, says Kulkarni.  Using GIS, Kulkarni can create multi-layered geographic models, with data sourced from her own research.

Combining the concept of technological modelling with epidemiology, Kulkarni’s work has the potential to look at disease in new ways, something that she says will “absolutely” be a factor in how infectious disease is studied in the future.

Lyme disease is a vector-borne infectious disease that is caused by bacteria spread in ticks.  By tracking tick populations using spatial statistics, Kulkarni’s work has become instrumental in Ottawa’s fight against Lyme disease, by quite literally placing the illness on the map.

Last summer, students from Kulkarni’s team tested for tick activity in potential tick hot-spots, usually suburban areas with tree cover or long grasses. Flannel sheets were dragged across the landscape, with a pause every 50 metres to take a geo-position reading and to collect any ticks on the drag. The ticks were then brought back to the lab, analysed and added to the team’s database.

“To date, we’ve been able to really characterise what the spatial and temporal patterns of Lyme disease transmission are within the City of Ottawa, looking at tick populations to see over time where they’ve been spreading, where the infected ticks are being found, and what are the factors that are determining or predictive of where tick populations are found,” said Kulkarni.  “Now we’re at the stage of relating that to human cases.”

So far, the team has been able to build a cluster map of the Ottawa-region, showing areas where Lyme disease is having an impact and where it’s not.

Lyme disease is a relatively new threat to the Ottawa area, having only emerged as a serious concern within the past five or so years. Ottawa Public Health recorded 168 cases of Lyme disease in 2017, which is more than double the number of cases recorded in 2016.

Due to its recent emergence, health authorities lack local data on the illness.  Stanton-Loucks says the lab’s work has provided much-needed localized information for Ottawa health authorities to base recommendations on.  For example, marking areas where people are of higher risk of contracting Lyme disease because of a high density of ticks in the region.

“We’ve been able to, through Manisha’s work and through OPH’s tick program, provide better information to physicians and other health care providers,” said Stanton-Loucks.

From Africa to Ottawa

Despite her success in the field, Lyme disease research wasn’t necessarily a path Kulkarni saw herself taking.

“I was always interested in health,” says Kulkarni.  “My future career aspirations were to do some research and then go to medical school, but I got very interested in research very early on.”

After completing her undergraduate degree in environmental biology at McGill University, Kulkarni became interested in malaria research when completing a fast-tracked Masters and PhD, leading to a four-year stay in Tanzania.

“It just took me in that direction without me necessarily planning it,” says Kulkarni. “Sometimes that’s the best way.”

Her expertise in malaria control and epidemiology allowed her to pursue an early career in international development, where she worked as a health specialist advising on a maternal health and child-health programming in Eastern and Southern Africa for the Department of Foreign Affairs, Trade and Development.

However, her love for research soon drew her back to an academic environment. It was during her postdoc at the University of Ottawa in 2008 that Kulkarni first became engaged in her current work.

Despite no longer living in Africa, Kulkarni’s research still balances a mix of internationally and locally focused projects.

“I enjoy both,” says Kulkarni. “I think they both bring different challenges and different advantages.”

On the international side, she is currently involved in a multi-national Malaria control trial in Tanzania, Zika virus research in South America, and work on maternal and child health on Ethiopia.

But, with climate and environmental change spurring on the introduction of new diseases to areas such as Ottawa, her work is also much-needed on a local level.

“I’m passionate about global health and working with vulnerable populations… but also, recognizing that we have our own challenges here in Canada and they’re only going to increase,” says Kulkarni.

The newness of spatial epidemiology has provided a niche for Kulkarni’s research to fill, but also presents her with unique obstacles.  Finding people trained in geomatics who can fit the capacity of research needed at a local level can be challenging, she says.  Geomatic research requires an individual to be trained in collecting and interpreting data related to the earth’s surface, as well as operating geographic information systems.

However, that’s not due to a lack of student interest.  Thickstun says he decided to approach Kulkarni to supervise his MSc research after wanting to study health issues while also gaining a tangible skill-set.

“Manisha’s a very hands-on supervisor in that we have sit-down meetings every week with the whole lab,” says Thickstun. “A lot of my other cohorts have supervisors who touch in with them once every three months and so it’s nice to be able to have someone who is consistently there.  It’s a very directed approach.”

With a team of two Master’s students, two PhD candidates, a post-doctoral student and a lab assistant, Kulkarni says academic interest in her work is strong.

Outside of the academic community, the lab’s work is also starting to receive positive attention from outside sources, such as public health organizations and the media, says Thickstun.

For Stanton-Loucks, Kulkarni’s collaboration with OPH is a valuable partnership that benefits both groups, and will continue to contribute in the upcoming year to OPH’s development of a public health strategy for Lyme disease.

“I think it’s important that we’re able to continue to get local data so that people are able to get evidence not just what they read on Dr.Google,” says Stanton-Loucks.

Seeing her work have an impact on infection reduction both in local and international communities, is a result that Kulkarni says she enjoys seeing.  As for the long-term, Kulkarni says she would like to see herself produce research that can be transformed easily into tangible public health solutions.

“Hopefully, my research can really inform those efforts in a very practical way,” says Kulkarni.