Tomatoes in the Territories?

The potential impacts of climate change on agriculture in Canada's north 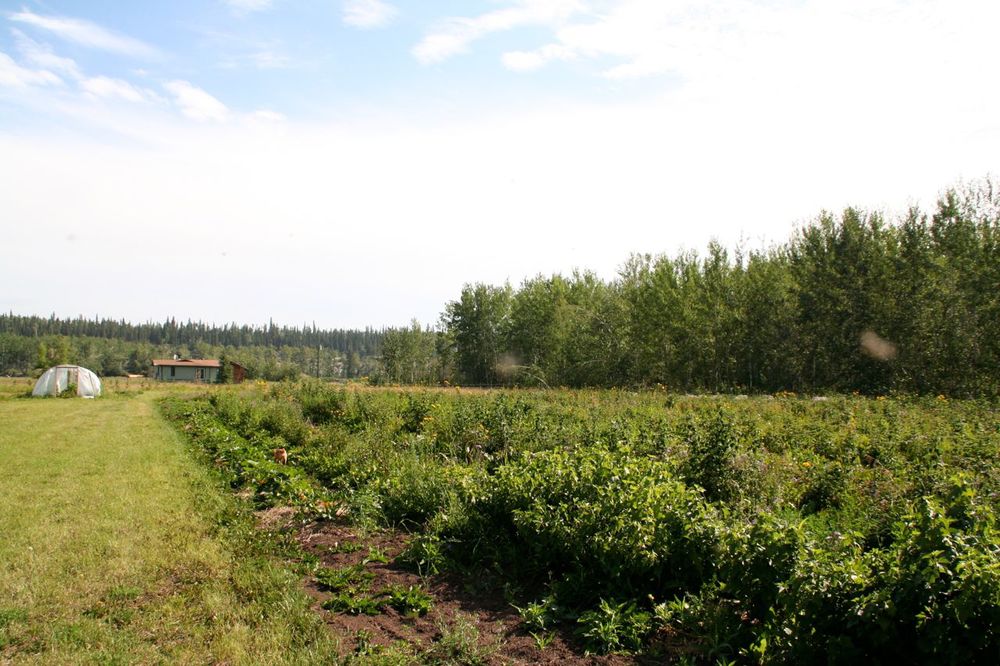 It is late November in 2087, and the harvest season is drawing to a close for backyard gardeners and commercial farm operators alike. This year’s bounty has been plentiful; a longer growing season has mean that potatoes and tomatoes, barley and oats, fruits and nuts have been practically flying from fields and orchards in record quantities. But what makes this bumper crop noteworthy is that these crops were grown not on the Canadian prairies or on the fertile grounds in Ontario and Quebec, but in the Slave Lake region of the Northwest Territories, located over 800 km north of Edmonton. Experts say that this vision of the future is becoming especially likely thanks to climate change.

If humanity is unable to reduce its greenhouse gas emissions to effectively zero by the end of this century, the world could be headed for some turbulent times. Severe heat waves,  droughts, flooding and sea level rise are just a few of the scary scenarios climate change could bring.  And yet, Canada’s agricultural industry, specifically farms in Canada’s northern territories, could benefit from warmer temperatures. An 2015 assessment from Canada’s federal government on the effects of climate change on agriculture has found that Canada would likely see, “an expansion of the growing season to go along with milder and shorter winters. This could increase productivity and allow the use of new and potentially more profitable crops.”

Stanford University’s Marshall Burke is among the world’s top researchers on climate and economic productivity. Burke and several of his colleagues recently published a paper in the scientific journal Nature looking at global warming’s impact on average global income. The paper found that while global warming could result in a 23 percent decline in average global income by 2100, Canada’s Gross Domestic Product (GDP) per Capita could increase by 247 percent in the same period. This is because crop output, labor productivity, health problems and human conflict are all tied to temperature changes.

Burke’s team produced these figures by studying the past. They looked at the impact of temperature changes on 50 years of economic activity in 166 countries. The team found that economies tend to perform best in areas with average annual temperatures of 13 degrees Celsius, which perfectly describes places like Silicon Valley in California. “Coincidence or not, these also tend to be some of the wealthiest locations in the world,” Burke said.

By extrapolating these findings into the future, specifically to the year 2100, the team found that Canada’s average annual climate approached the 13 degrees “sweet spot”, predicting potentially large economic gains. As for Canada’s northern territories, the changes in temperature would be even more severe. Over the past 50 years, Yukon’s average temperature has increased by 2°C and winter temperatures have increased by 4°C; an increase increase two times the rate of southern Canada.

Rod Bonnett, president of the lobby group Canadian Federation of Agriculture, says climate change may create opportunities for growing crops in northern latitudes, such as portions of the Yukon and Northwest Territories, the Peace River region between northern British Columbia and Alberta, and parts of northern Ontario. “There is a lot more interest in taking a look at underdeveloped land in northern Ontario and Quebec because of changes in climate,” Bonnett explained. 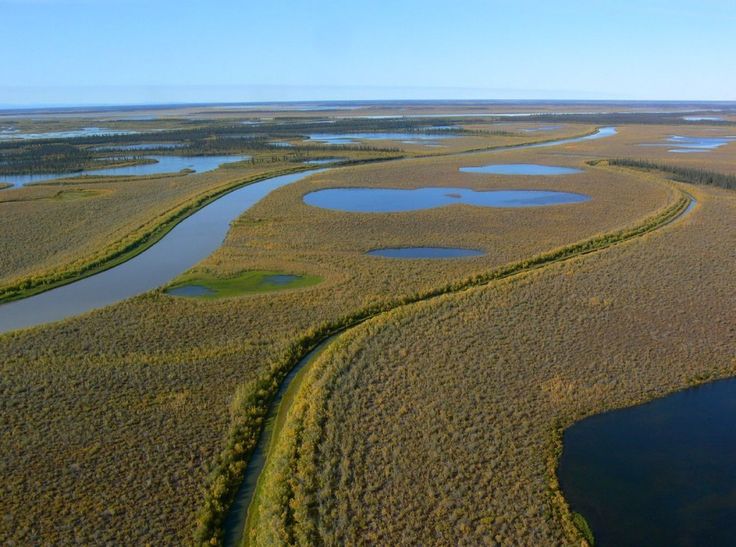 A shot of subarctic land located near the Mackenzie River. [Photo courtesy of Monte Hummel, WWF-Canada]

Agriculture does already take place in Canada’s northern territories, both in greenhouses and outside, but it is small scale and limited to the local market. Roads and rails are also much less common in the northern territories, so food must either be flown in or shipped in. This often results in high food prices for northern communities; a jug of orange juice can cost upwards of 25 dollars, while a bunch of bananas is priced at seven dollars.

Zhang Xuebin is a research scientist with the Ministry of the Environment and Climate Change. She says that in the short term, warming may be beneficial to Canada because an extended growing season would be favorable to prairie farms growing crops such as maize and soybean. However, too much warming could also have negative effects on Canadian agriculture.

“If the temperature increases too much, say beyond a couple of degrees globally, warming would also be associated with enhanced evaporative demand which could lead to drier conditions that make it unfavorable to such crops.” 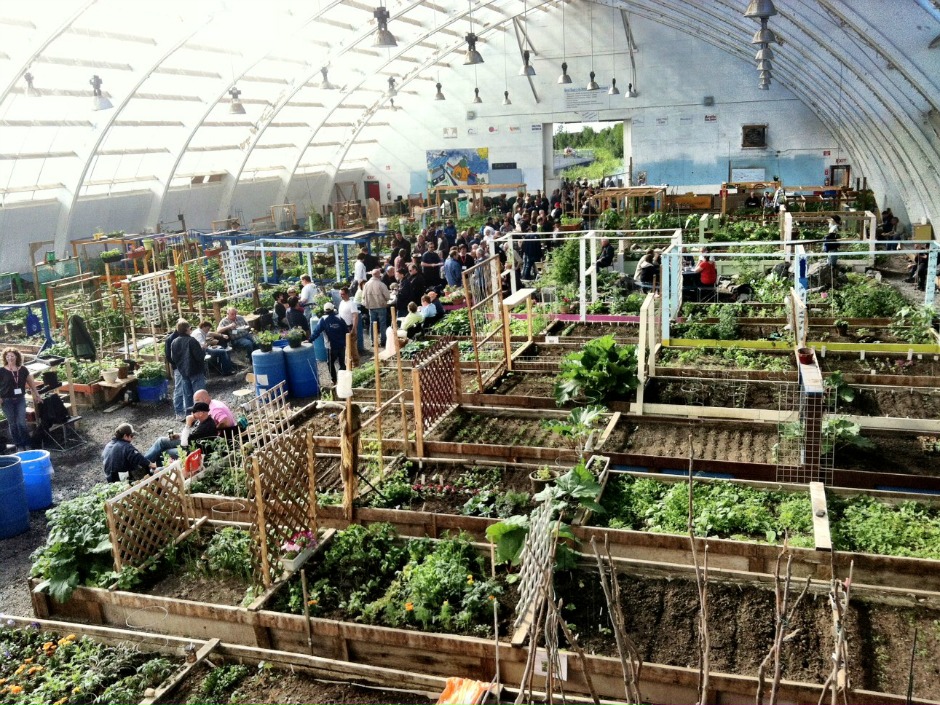 A greenhouse located in the Northwest Territories. [Photo courtesy of Sarah Reaburn]

The impacts of rising temperatures, both short term and long can be projected with supercomputers, using what climate scientists refer to as global circulation models. By using such a model for the Prairie Provinces under two conditions, current and future climate,  Agriculture and Agri-Food Canada scientists predicted in 2004 that under a future climate, on average, high temperatures would increase by 2ºC to 3ºC and low temperatures increase by about 3ºC. Since there is already a growing-season moisture deficit in much of the Prairie region, even slight declines in the availability of moisture could cause significant harm to crop production.

Rapidly warming temperatures would also have far-reaching consequences for Canada’s northern territories. For example, melting ice could open up new shipping routes in the Arctic Ocean. This would significantly reduce the time and cost of international trade, and would allow Canada to more easily transport agricultural products grown further north around the world. In a recent paper Lawrence Smith, an expert in Arctic resources as UCLA  has speculated that the city of Churchill, Manitoba, located on the Hudson Bay, could become one of the 10 “ports of the future.” 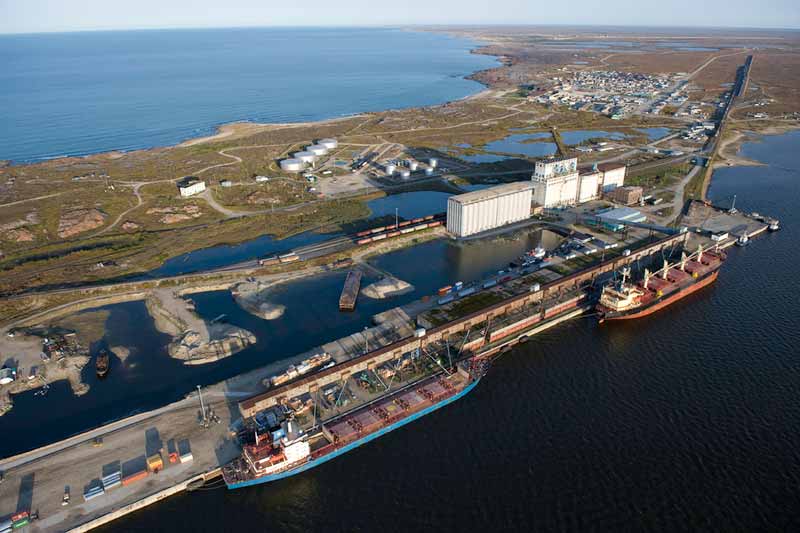 The port of Churchill, Manitoba. [Photo courtesy of the Winnipeg Free Press]

Chris Derksen also works for the Ministry of the Environment and Climate Change, mainly studying cryosphere and climate interaction. He says that shipping is on the rise in the Canadian Arctic. “This is due to a combination of both changing ice conditions, such as longer ice periods in the summer, and economic drivers like resource extraction activities and tourism,” he said.

However, while a growing agricultural hub in Canada’s North would be well served by increased shipping, climate change also comes with hazards that a new agricultural hub will have to face. In order to grow food further north, there are a few challenges Canada will have to overcome. For example, extreme weather events, such as the 2001 and 2002 droughts or the wildfires that recently devastated areas of Alberta, would have a devastating impact on agriculture, potentially reducing crop yields by as much as 50 per cent.

Barrie Bonsal, who studies Climate Impacts on Hydrology and Ecology for the Canadian Government, predicts that as the climate warms droughts will become more frequent and severe and last longer, especially in the interior regions of Canada such as the Prairies and interior British Columbia during the summer season.

“This will differ depending on the region of the country, the time of year, and the way that the precipitation is delivered. All climate models are projecting warmer temperatures in Canada while future precipitation, both the total amount and intensity, has a higher degree of uncertainty,” he said.

Research from Agriculture and Agri-Food Canada has suggested that Alberta would benefit the most from increased summer and winter precipitation, while eastern Saskatchewan and Manitoba would experience little change in precipitation or smaller increases. The northern territories already receive low amounts of rainfall (most precipitation comes in the form of snow) so irrigation would be especially important for growing crops.

Rob Huebert, a University of Calgary associate professor who has studied the impact of climate change on the Arctic, claims that the same warmer temperatures that could boost corn and soybean production could harm agriculture in the semi-arid regions of Alberta, Saskatchewan and Manitoba. “You move over to the arid zone, which is very conceivable, then you start seeing widespread destruction of agriculture and cattle farming,” Huebert said. Warmer summers might also cause problems for livestock producers related to heat-wave deaths, especially for poultry operations.

Melting permafrost will also be a barrier to development in Canada’s north. “Permafrost melt would complicate further northern development because of the land collapse that follows the melting of ice content in the soil. Accounting for permafrost changes is already a major design challenge for northern communities,” Derksen explained.

Another challenge for northern agriculture is soil. According to a soil survey report of the region, Yukon soils are generally deficient in nitrogen, potassium and phosphorous, nutrients that soils require to grow crops. The Northwest Territories are better suited for agriculture, but the fertility of soils still varies from place to place.

However, according to the 2015  assessment by Agriculture and Agri-Food Canada, climate change could actually improve soil quality by enhancing carbon sequestration, which is the long-term storage of carbon, and by reducing the emissions of greenhouse gases. Additionally, some regions with poor soils still have the potential for raising livestock. Overall, more research is needed to determine just how suited these soils will be for agriculture. 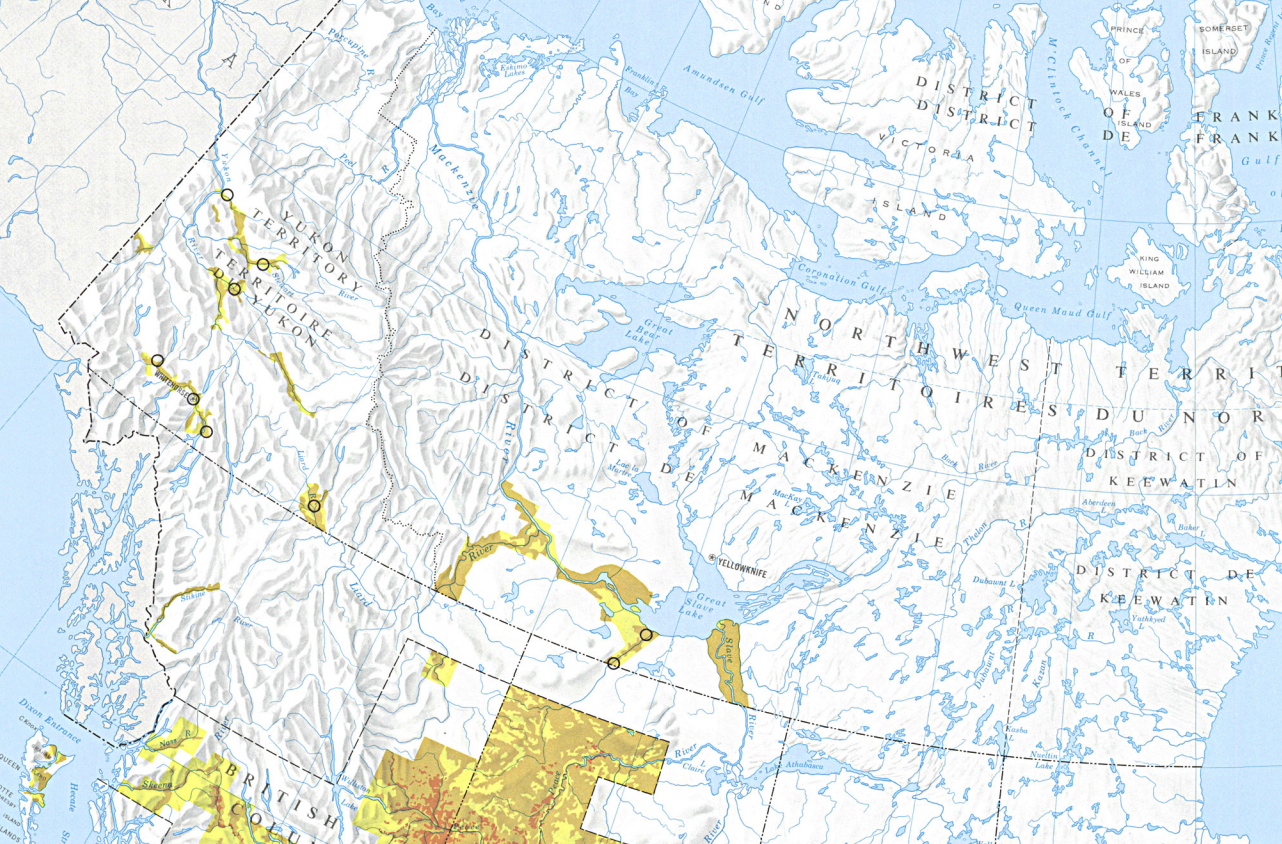 With food being more available to northern communities and economic opportunities becoming more common, more Canadians may feel inspired to immigrate further north. It remains to be seen just how this will pan out, but changes to the environment are coming no matter what. Climate change could bring new economic opportunities for Canada, but it will likely bring hardships as well. Xuebin maintains that no country will be safe from the upheavals of global warming. “There will be positive impacts and negative impacts as well, but overall there will be more losers than winners.”