Treat Yourself: The reasons behind your stress eating and cravings 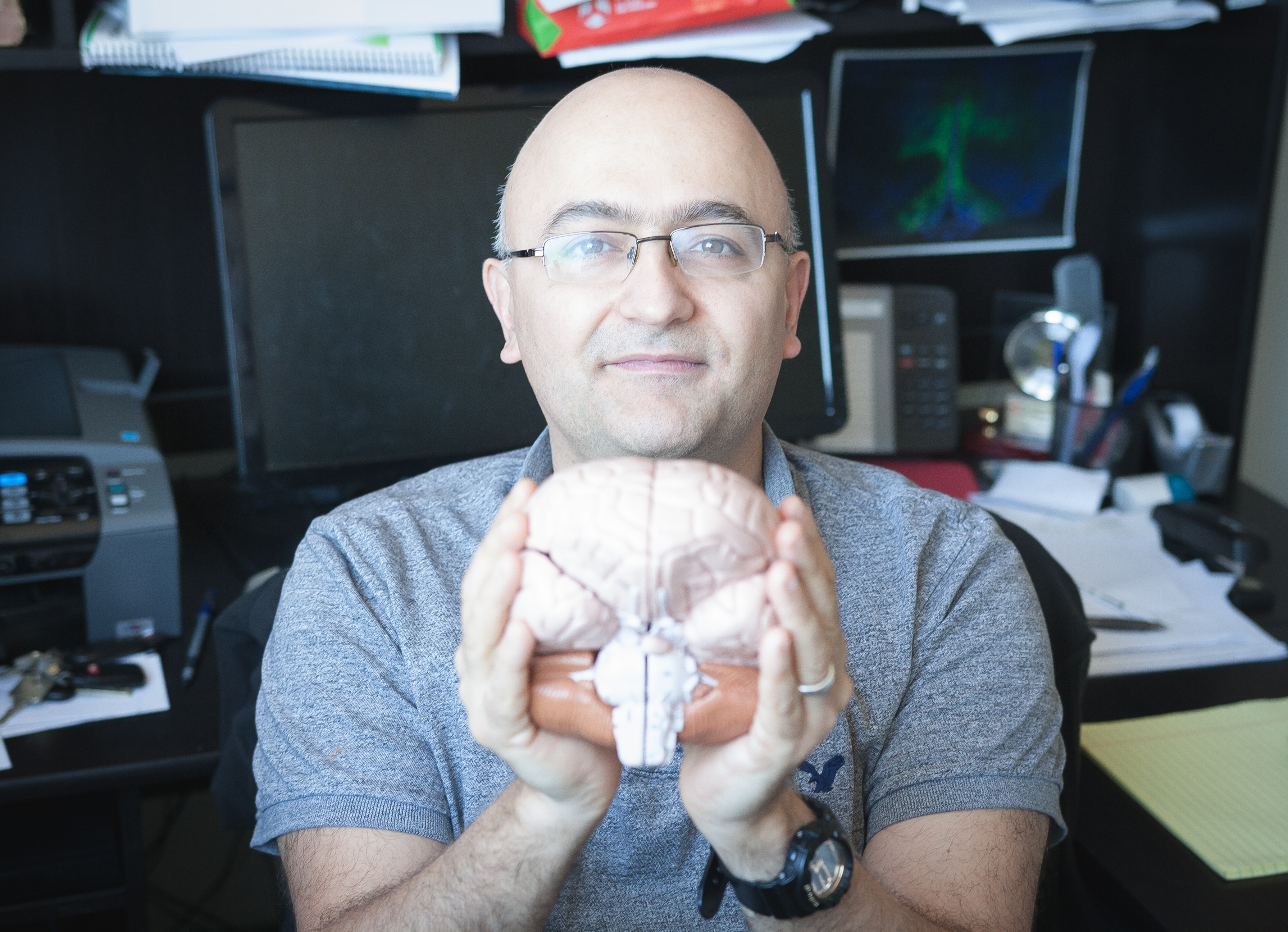 At first glance the walls of Afonso Abizaid’s office are a riot of abstract blobs and colours, with little to suggest any deeper message. On closer inspection, his choice of office arts proves to be far more meaningful. All of the images are representations of neurons and brains, Abizaid explains, the foundations for all thought and desires and the focus of his scientific passion.

“They’re from the neuroscience art show,” he says about the art. “Some of my students contribute… I like supporting them.”

The neuroscience professor at Carleton University sits in the newest addition to the school. The health science building is getting its final touches as construction workers roam the halls and the smell of paint is still faint in the air. But looking at Abizaid’s office, it’s safe to say he’s settled in.

Abizaid has been at Carleton for over a decade studying eating patterns and behavioural rhythms of the body. Leaning in with his hand clasped over his desk, he’s eager to talk about his work.

“My main focus is on how stress effects the brain to regulate how we eat, how much we eat, how fast or slow the metabolism becomes, and ultimately how that can lead to type two diabetes, obesities, cardiovascular disease and things like that.”

Abizaid’s work predominately focuses on one hormone, ghrelin. Produced in the stomach, the brain controls the secretion of what is known as the hunger hormone.

He explained throughout the day our bodies have daily patterns or rhythms that re-occur naturally. “Rhythms of secretion for ghrelin match with our meal patterns,” he said. “This hormone goes off just before breakfast, just before lunch and just before dinner.”

“If you inject me with ghrelin I’ll start craving salvaki and shawarma,” he said with a laugh. While other people might say ice cream or deep dish pizza, its usually high calorie, rich foods that we crave according to Abizaid.

Part of this reaction comes from how eating can improve some people’s mood. “You get grumpy when you get hungry,” he explained. “The hormone stimulates appetite for things that make you feel better.” Abizaid wanted to look into why that was and why people craved this food especially while stressed.

Abizaid didn’t intend on becoming a researcher at first. After finishing his undergrad in psychology at Concordia University, he wanted to become a clinical psychologist and began working with youth at risk. However, it wasn’t the path for him. “I realized I was bringing home too much baggage and I wasn’t going to able to deal with [that].”

During his undergrad he became a research assistant where he was exposed to research and experiments. This led him to pursue a masters and a doctorate degree also in psychology, studying body weight regulation and brain mechanisms.

At the end of Abizaid’s doctorate degree, he received a fellowship at Yale. There he began to work with ghrelin, sparking an interest. “I was there for four years working with that hormone before I brought this work to Carleton.”

A breakthrough came early in Abizaid’s time at Carleton when he and his team found ghrelin isn’t just secreted right before your next meal but also during stressful situations.

“If you ask a student to present a topic in front of his peers and you know you get nervous in front of a class, if I would take a blood sample, the student’s ghrelin is higher compared to one of the observers,” he explained.

Other research teams also confirmed the results. Stressed out individuals also tend to crave palatable foods. With his research, Abizaid saw that chronically stressed animals will eat more and their ghrelin levels are higher than those who are not chronically stressed. Overeating resulted in weight gain and insulin resistance.

Hymie Anisman, professor of neuroscience and one of the main researcher’s on stress at Carleton says there are several reasons why people eat in socially stressful situations. “People eat to feel better and they eat yummy foods… I’m not going to go for a carrot stick,” he said.

The results have also been seen in humans according to Abizaid. Social stressors such as conflict, negative and/or anxious environments are linked to higher rates of food consumption, affect your metabolism in a negative way and raise insulin levels.

After this discovery Abizaid began working on a solution to help people better cope in stressful situations.

Abizaid works with undergraduate and graduate students to facilitate the experiments. His team started to develop a drug that would control the release of ghrelin and reduce its secretion.

Lindsay Thompson-Hyland has worked with Abizaid for five years, first in her undergraduate degree, then graduate degree and now as a research assistant.

She knows too well the hard work it takes for research like this.

“Science itself has its ups and downs but working with Alfie makes it easier,” she said. “Obviously I’m a little biased because I’ve been working with him for a long time but he’s super laid back, super understanding, such a father figure.”

Students like Thompson-Hyland do all of the research on mice and rats where the animals are subjected to different scenarios to see how they react to ghrelin suppressors.

The team ran into problems during the testing. They found animals after having their ghrelin suppressed did lose body weight but became more susceptible to depression and anxiety. The mice that were injected with ghrelin did gain weight but were significantly less anxious.

This was shown in a five minute test that looked at the interactions between mice. A mouse that is genetically altered to not produce ghrelin is put in a controlled environment and a stranger mouse is also put in. This is seen as a stressor as it may cause the mouse to be anxious. Then the genetically modified mouse is watched to see its response.

“We looked at how the stressors affect whether or not they would interact socially with a stranger mouse,” explained Thompson-Hyland.

More anxious mice, usually those that were genetically modified to not produce ghrelin therefore are eating less, will stay on the sides of the box rather than interact with the stranger mouse. When the mice are injected with ghrelin, the mice became more social but gain weight.

“It’s a double-edged sword, you may get heavier and develop obesity or you may get stressed,” said Abizaid.

These problems could be blamed on the complexity of eating behaviours.

Zul Merali, the president of institute of mental health research at the Royal Ottawa mental health centre recognizes humans respond to stress by eating however, this is not a universal response. The act of eating is much more complicated according to Merali and in some cases leads to more stress.

He uses the example of birds at a bird feeder that are not relaxed while eating and usually skittish. “They feel vulnerable as they could get attacked while they are feeding.” The same can be seen in dogs that become aggressive with their food.

“There’s lots of variability with coping with stress,” he explained. “Food activates circuits of pleasure… it can also activate physical stress circuits. You’re getting two different circuits going and we’re trying to understand [why that is].”

Merali is currently performing brain scans on people to see which circuits are activated when eating.

Abizaid and his team are trying to come up with the best possible drug that reduces body weight and does not lead to stress and the pathological diseases that come with it like anxiety and depression.

Afterwards, Abizaid hopes to get a sponsor so the drug can be part of a clinical trail. He explains its difficult as drugs must go through stringent testing and funding is always a challenge.

Ultimately, this research is part of Abizaid’s broader goal to help people find a balance in life whether that is through changing their behaviour, using drugs or both.

“What we’re trying to understand is what are the things that will get you to that balance faster and prevent disease.”