By Dylan Proulx and Chelsea Emode

Every five minutes, Keelan Murphy lifts a vaporizer to lips and inhales. A daily routine he started ten years ago when he was 8-years-old, as an alternative to smoking cigarettes.

“It’s like a quick numbing sensation, but it hurts at the back of your throat, then it rushes to your head and you just feel all loosey goosey,” he said. E-cigarettes give users the ability to control and change nicotine levels, a useful tool for those trying to kick the smoking habit.

But at 18 years of age, Murphy is one of 470,000 vape users who started vaping before reaching the legal age, according to a 2017 government survey.

According to an article from Forbes, the rise in popularity in youth is due in part to the growing trend of vape tricks and videos online, and the many different flavored vape “juices” –  the liquid pod inserted into the vape – that are offered. However, now studies are showing that vaping is the cause of serious lung injuries.

According to Health Canada, as of December 3, 2019, there have been 13 confirmed or probable cases of severe lung injury as a result of vaping in the country. Meanwhile, American health authorities have reported over 2900 injuries and 48 deaths in the U.S.

Now JUUL, a popular North American vaping company, is being investigated by the FDA for multiple health and ethical violations, while also facing multiple lawsuits from parents and underage users. Health groups are urging policy makers to crack down on vaping products and regulation, especially to youth, while researchers race to figure out exactly what is causing the vaping-related injuries.

The risks of vaping

Originally marketed as a healthier alternative and a way to help quit smoking, vape and e-cigarette products have seen a massive rise in popularity in recent years. Not only did vapes become popular among adults trying to quit smoking, but increasingly among many young people, most of whom never smoked cigarettes before trying vape products.

According to a 2017 government survey, a third of Canadian students between grades seven and twelve don’t think there’s much risk to vaping. Meanwhile between 2015 and 2017, vaporizers used by this demographic increased 13 percent and with it the number of cases of vape-related injury.

“This is a public health crisis”,  Brandon Larsen, a surgical patholgist with the Mayo Clinic, said in the initial report published by the Mayo Clinic News Network. He is part of a team that examined biopsies from 17 patients suspected to be suffering from a vaping-associated lung injury and co-author of the study. 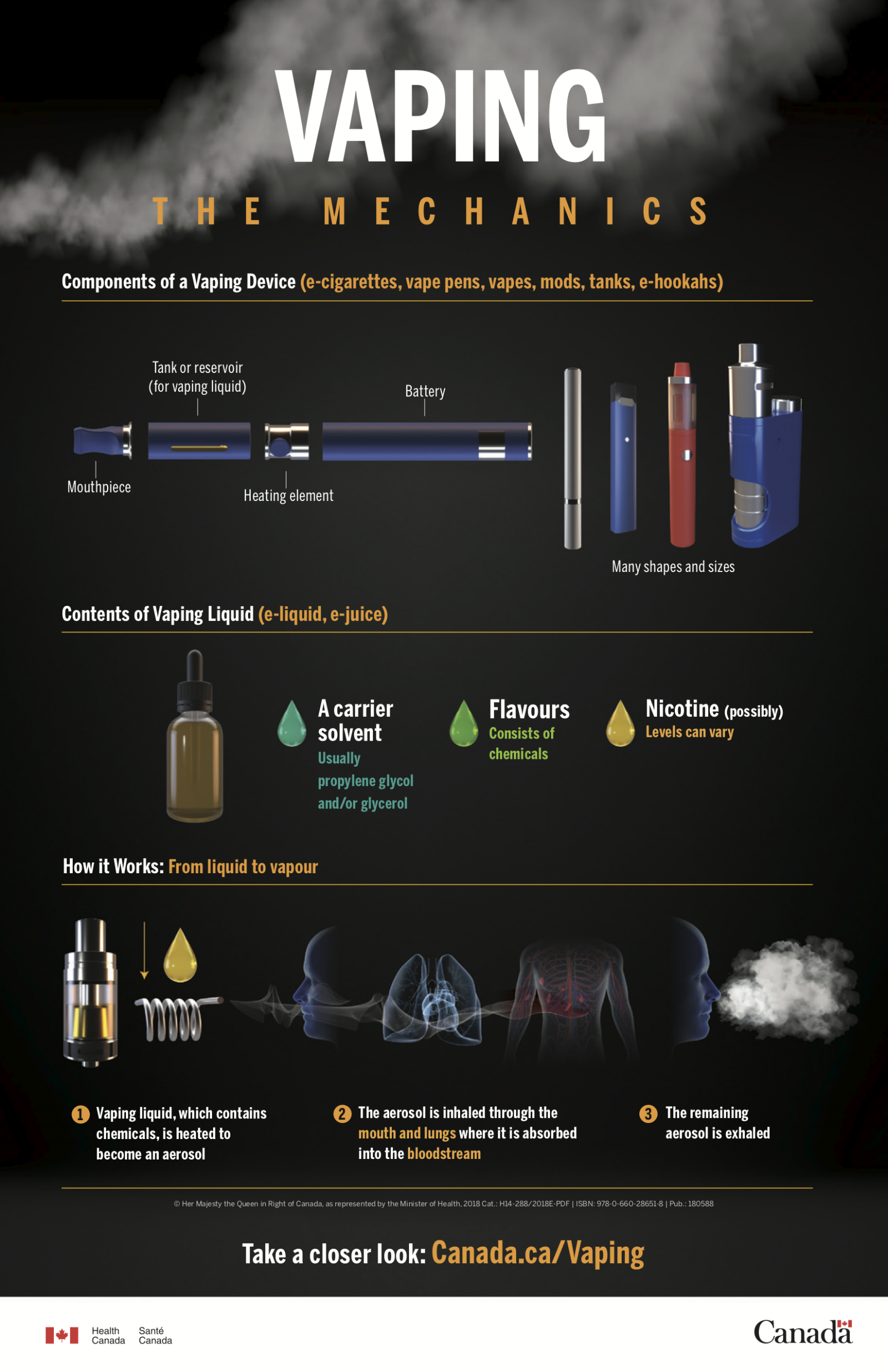 Government of Canada infographic on the mechanics of vaping. [Graphic courtesy of Health Canada]

Of the 17 patients examined, two have died as a result of the injuries.

Larsen said that there is no single common feature responsible for the vaping-related injuries, such as a specific oil or model of vape pen, that all the patients have used. However, his team found that lung injuries from vaping are most likely caused by toxic chemical fumes.

The lung injuries experienced by patients biopsied was similar to the injuries suffered by soldiers exposed to mustard gas in the First World War, said Larsen.

“It just fries the airways or the windpipes in the lungs, like a toxic chemical exposure and toxic fume exposure, and that’s exactly the kind of findings we’ve seen in the lungs of people who are getting sick from vaping,” he said.

It was originally thought that oil accumulation in the lungs from the oils in vape products was to blame for the vaping related illnesses, and although it has not been ruled out, the biopsies studied suggested the lung injury was likely due to contact with noxious chemical fumes, he said.

Murphy, who used to vape up to 55 mg of nicotine has reduced it to 6 mg because of the negative affect vaping has had on his breathing.

“I want to be able to breathe. My lungs ever since I started have been like an 80 year old that has been smoking 14 packs a day,” he said about why he’s quitting vaping.

The Mayo Clinic study found that of the 17 patients biopsied, 71 percent reported using cannabis or marijuana oil vape products. But, said Larsen, “It can’t be as simple as vaping marijuana oil or cannabinoid oil, because there are people not doing that who are also getting sick.”

As the number of cases grow, Health Canada continues to investigate the emergence of vaping-associated lung illness, and has warned people of the potential risk of pulmonary illness associated with using vaping products.

Health Canada and the Public Health Agency of Canada (PHAC) have created websites to keep Canadians up to date on cases of illness related to vaping.

PHAC and the Council of Chief Medical Officers of Health have also formed a task group with the purpose of creating a uniform approach to identifying and reporting cases, as well as testing vaping products, according to Health Canada.

The website created by Health Canada advises illegal vape products should not be used, as well as cannabis vape products.  In May 2018, before the vaping injuries became as widely known, the Government of Canada enacted the Tobacco and Vaping Products Act, legally allowing adults 18 and older to purchase vape products that contain nicotine. This act was intended to reduce chance of youth addiction to nicotine by prohibiting advertisements that appeal to them and placing health warnings on packaging. However, most provinces and territories also have their own regulations for tobacco and vaping products, which creates a lack of uniformity across the country.

The business of vaping

Despite the attempts to regulate vaping and educate on the dangers associated with it, vaping has become a subculture and lifestyle, complete with its own aesthetic, lingo and icons. People who vape use slang like “juice” to describe the vape liquid that contains the flavour and is turned to the aerosol that is inhaled; a “mod” is an advanced e-cigarette; and a “cloud chaser” is a vaper who adjusts their mod to make larger vape clouds.

Murphy said that he’s felt a sense of community out of mastering vape tricks it influenced his high school experience.  “That’s where all my friends came from in high school,” he said.

Other youth vapers have similar experiences of finding a community and a sense of belonging.

17-year-old, who requested to remain anonymous said that his talents with vape tricks helped make him popular in his high school.

“I could blow the little cool O’s [out of vapor] and everyone was like ‘damn that’s cool’, and I was part of the cool kids.”

Kate LeBlanc an 18-year-old who works at a Cobbs Bread location in Alberta said that she started partly because everyone in her high school was vaping.

“It’s purpose is to quit smoking… but I do really like to do tricks. I send my friends Snapchats of tricks.” She said she likes to blow O’s and blow secondary clouds within them so they look like jellyfish.

Part of the rapid rise in young users is targeted advertising. The Heart and Stroke Foundation’s  2018 report on e-cigarettes in Canada states that despite the fact that Bill S-5 has prohibited promotion that appeals to young people, “such as the promotion of flavours like confectionary or candy,“ it exists on social media platforms – places where youth frequent. It warns that these ads also make smoking “glamorous” making it “a socially acceptable product free from stigmatization and guilt.”

Vape companies have come under fire for their role in the increase of youth using their products. According to Business Insider, JUUL has had to undergo rebranding as a consequence of it’s extremely popular youth audience.

Although JUUL contends that it did not explicitly target youth, the company’s early marketing tactics of using young and attractive models, portrayed a lifestyle appealing to youth, said Reagan Bradley, marketer, personal brand strategist and founder of Woman Who Lead

“JUUL had social media influencers, people with large followers on Instagram to promote their product. They promoted hashtags like #juul #juul vapor ,#switchtojuul which influencers blasted out to their followers – a lot of them being kids that are under the legal age to be consuming cigarettes or cannabis,” Bradley said.

In an effort to combat this, JUUL has opened up a Youth Prevention department which on their website aims to improve age verification, remove JUUL marketing material, restrict the ability for underage youth to receive products from friends and family, clear labelling of health risks in French and English and using ID match for online age verification.

According to JUUL’s LinkedIn job posting for their Youth Prevention Coordinator in Toronto, lists some of the position’s roles and responsibilities include working closely with leaders in government affairs, communications and marketing organization. Others include managing and developing Youth prevention measures and programs.

Bradley warns that it should be taken with a grain of salt. JUUL, recently bought by large tobacco conglomerate Altria, is a company trying to stay afloat and keep its product on shelves.

“Even though they’ve completely switched their marketing strategy after getting fined and reprimanded by the public, those hashtags don’t die they’re still being used. The marketing tactics that they used early on aren’t going to go away just because they’ve changed their strategy. The youth have already adopted their product,” she said. 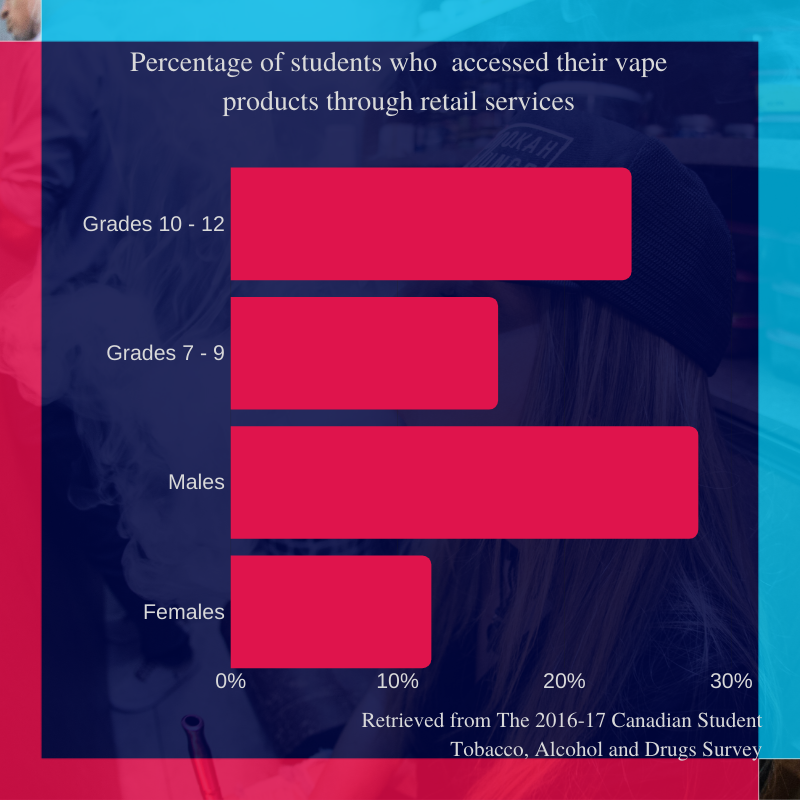 The 2017 government survey, found that more than half of students had used e-cigarettes in the past three days of the survey, while 11 percent used daily. Of these users, 15 percent were between grades 10 and 12 and 5 percent in grades seven and nine. 23 percent of students in these grades said they thought there was no risk to smoking e-cigarettes once in a while and 10 percent thought there was no risk to smoking e-cigs regularly.

Bradley said the only solution might be for legislatures to classify this as an adult substance that needs added parameters and regulations around it in order to keep it out of the hands of youth.