What does the caterpillar say?

In search of a non-chemical pest control option, scientists are eavesdropping on caterpillar communication.

By Lysia Filotas and Chris Miller

A lone masked birch caterpillar takes a break from building a shelter to scrape its rear end against a leaf. It produces a vibration audible to other caterpillars close by. They hear its call and slowly make their way towards it. Upon arrival, they too begin to vibrate.

Chanchal Yadav, an entomologist at Carleton University, sits quietly in her lab watching it all happen. She is fascinated by the complex vibratory signals of this tiny insect and wants to continue mapping this creature’s communication methods as it transforms into a hooktip moth. 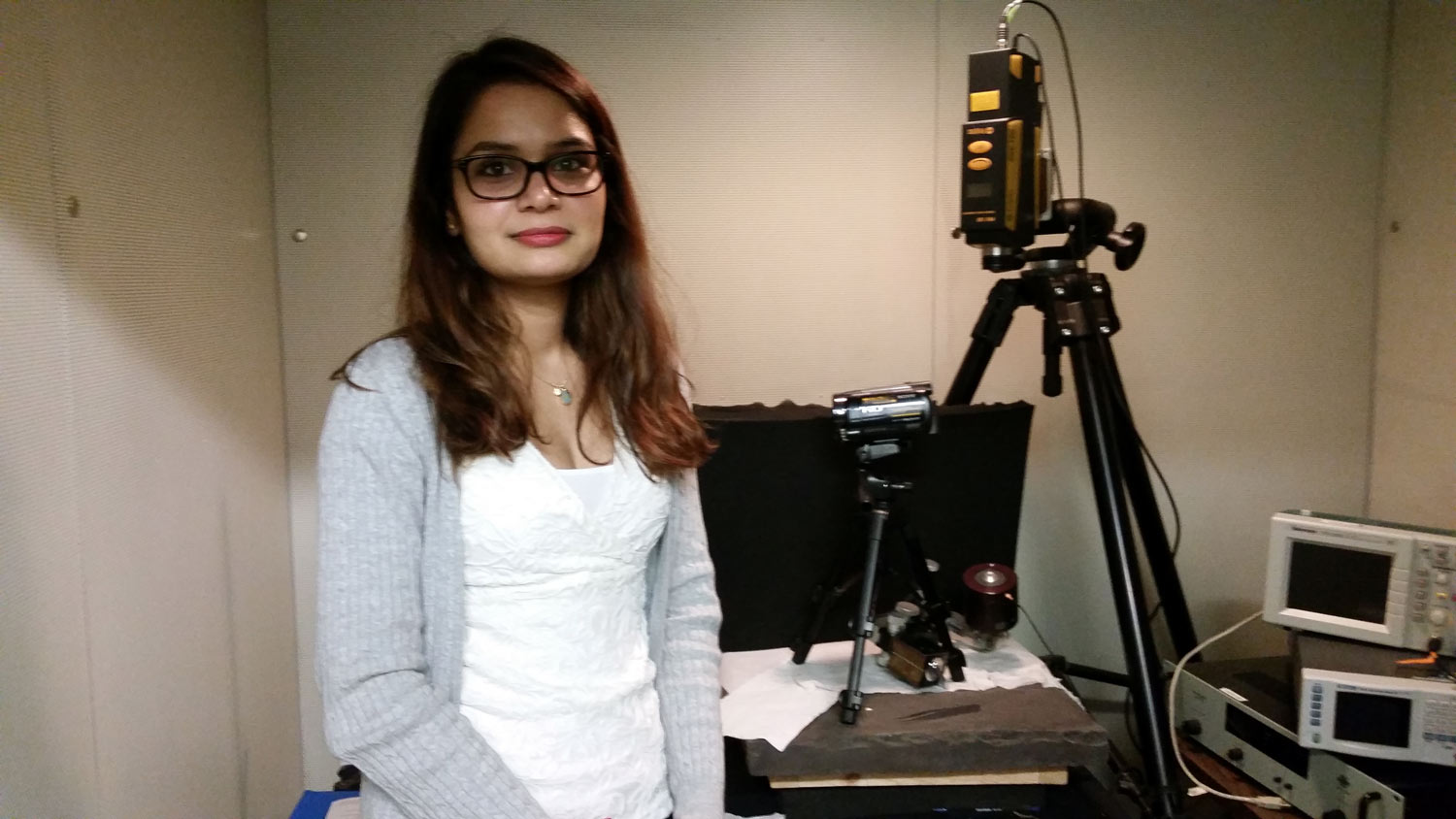 Her research, which was conducted by observing and recording the behaviours of masked birch caterpillars in the first two stages of development, found that these creatures interacted with each other through sounds created by drumming and scraping their rear ends and mouthparts against leaves. Yadav also observed a buzzing noise when the caterpillars shook their bodies.

“These signals are used as both advertisement for feeding spots and recruitment to build shelters,” says Yadav. According to her, producing enough silk to complete a cocoon is labour intensive so the masked birch caterpillar usually looks for friends to speed up the process.

While the function of vibrating in gatherings is still unknown, Yadav says the study is the first to find evidence caterpillars use vibrations to form social groups.

These discoveries could open the door to non-chemical methods of insect management, since many pests spend part of their lives as caterpillars and likely share similar styles of communication.

Research on how vibrations can be used to manage caterpillars is still in its infancy and scientists can only speculate on how it would work.

If vibration-emitting devices for caterpillars reach the point where they could be developed for widespread use, Richard Mankin, an entomologist with the U.S. Department of Agriculture based in Florida, says they would likely be ones that make a plant tremble through small motors that run on electricity.

The apparatus would use a small computer, powered by solar cells or batteries, to mimic the same signals the pests produce, says Mankin, adding once an insect is lured over, it would probably be captured using a sticky surface or trap that lets it in but not back out.

The good and the bad of vibrations

Besides reducing risks to the environment and public health caused by chemical methods of pest control, Mankin says using vibrations for pest management has the added benefit of being species-specific, making it more targeting.

“If there are specific vibrations a particular kind of caterpillar pays close attention to, then you can put those out there, “says Mankin. “They’re not going to affect other species much, even if they communicate with vibration, because they’ll have different communication patterns.”

But Jernej Polajnar, a researcher at the National Institute of Biology of Slovenia, says vibration-emitting devices can harm beneficial organisms. “Even if the signal is specific, we need to amplify it a lot to reach all the areas we want to protect,” he says. “This might jam the vibration sense of bees, for example, and cause food collection problems because worker bees might learn to avoid vibrating plants which contain pollen,” a key working source. 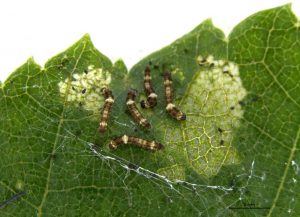 Plants can also be directly affected by mechanical vibrations, says Mankin. “There have been a few studies that indicate high levels of vibrations reduce plant productivity, so it’s possible yields could shrink.”

Vibrating the pests away

A review by Polajnar, which was published in the Pest Management Science Journal, says there are several ways to use vibrations to manage pests. One of the most popular methods is to disrupt or manipulate behaviour with loudspeakers that create sounds loud enough to shake the ground.

It’s an approach that has been widely used by scientists who are trying to prevent the mating communication of stink bugs and leafhoppers, but it has yet to be tried on caterpillars, says Valerio Mazzoni, an entomologist at the Edmund March Foundation in Italy.

The idea of using vibrations to control insects is a well-established one. For example, in 2000 a vibrational device called the Bugjammer was created. It combines visual cues with the sound of a low frequency dog or human heart beat to attract biting insects, such as mosquitoes.

The question is, could using sound against caterpillars be an effective, non-chemical way to protect crops.

Mankin says using vibration-emitting devices to protect relatively small, physically unconnected plants, like wheat or corn, wouldn’t be very practical because it would be very expensive. The existing devices scientists are using for their research on other insects currently range from $20 – $300 and only carry vibratory signals for about a square metre. At minimum it costs $100 – $200 to cover a hectare of land with pesticides.

And even if the price for these devices were affordable, their effectiveness might be short-lived since caterpillars go through several developmental stages where their priorities change. When some juvenile caterpillars become moths that are ready to mate, for example, they release pheromones and may become less sensitive to other signals, says Mankin. “It’s just the vibrations that have importance to an animal’s survival or mating that they’ll pay attention to.”

A conspecific (one individual) caterpillar meets up with a vibrating resident (a caterpillar that has already set up a shelter and started to feed) and forms a group by communicating through vibrations. [Video taken from study titled “Invitation by vibration: recruitment to feeding shelters in social caterpillars”.]

Polajnar says another possibility is to use a device that mimics the vibratory signals caterpillars use when establishing territories. “If the playback is amplified enough, caterpillars might think the leaves are occupied and avoid them,” he says.

Still, Polajnar says there might be problems with this approach. “Caterpillars aren’t very mobile so it’s difficult for them to climb another tree,” he says. “If they can’t find a vibration-free leaf and they’re hungry enough they might start feeding anyway.”

Another issue might be that some species are completely insensitive to vibrations, in which case Polajnar says it could be possible to simulate a predator.

“It would be like creating a vibrational scarecrow that could suppress caterpillar feeding behaviour or influencing female egg-laying,” says Rex Cocroft, a biological scientist at the University of Missouri.

However, results from vibration-emitting devices might be short-lived, says Steve Whyard, a biologist at the University of Manitoba. “Some insects can initially show some extra excitability and activity with this approach,” he says, “but they might eventually get used to it and ignore it.”

Despite its limitations, Cocroft says vibration-emitting devices could still be a possible alternative to pesticides if they are made to replicate noises that trigger a plant’s natural defense system.

Cocroft conducted a study in which he found playing the sound of a chewing caterpillar was enough to trigger the release of toxins in mustard plants.

Exposing the plants to chewing vibrations for a few hours primed them so that when they were attacked by caterpillars they responded with much higher levels of oils that are toxic to the creature, says Cocroft.

But Polajnar says precautions need to be taken if future work is done with plants.

“Plants themselves respond to mechanical vibrations in various ways, some of which are not beneficial. A lot of research still needs to be done in this field to determine whether the approach is safe.”