For Ottawa’s only remaining mushroom farm, a switch to cleaner fuels not only helped the environment — it saved the business.

A staticky voice beckons from a handheld radio on the table next to Mike Medeiros. Around him, the low whirs of machinery pierce through the walls and a faint, earthy smell permeates.

Medeiros is sitting in his office at Ottawa’s only remaining mushroom farm, located in Osgoode. He’s being radioed by his staff to return and attend to the everyday business of running things, while other employees pop in and out of the room with more messages. They’re always urgent.

Medeiros, the co-owner of Carleton Mushroom Farms, juggles these daily responsibilities with exceptional calm. He’s rarely on one task for long before the next begs for his attention, but Medeiros doesn’t skip a beat when asked if switching to cleaner energy saved his family’s decades-old business: “Absolutely.” 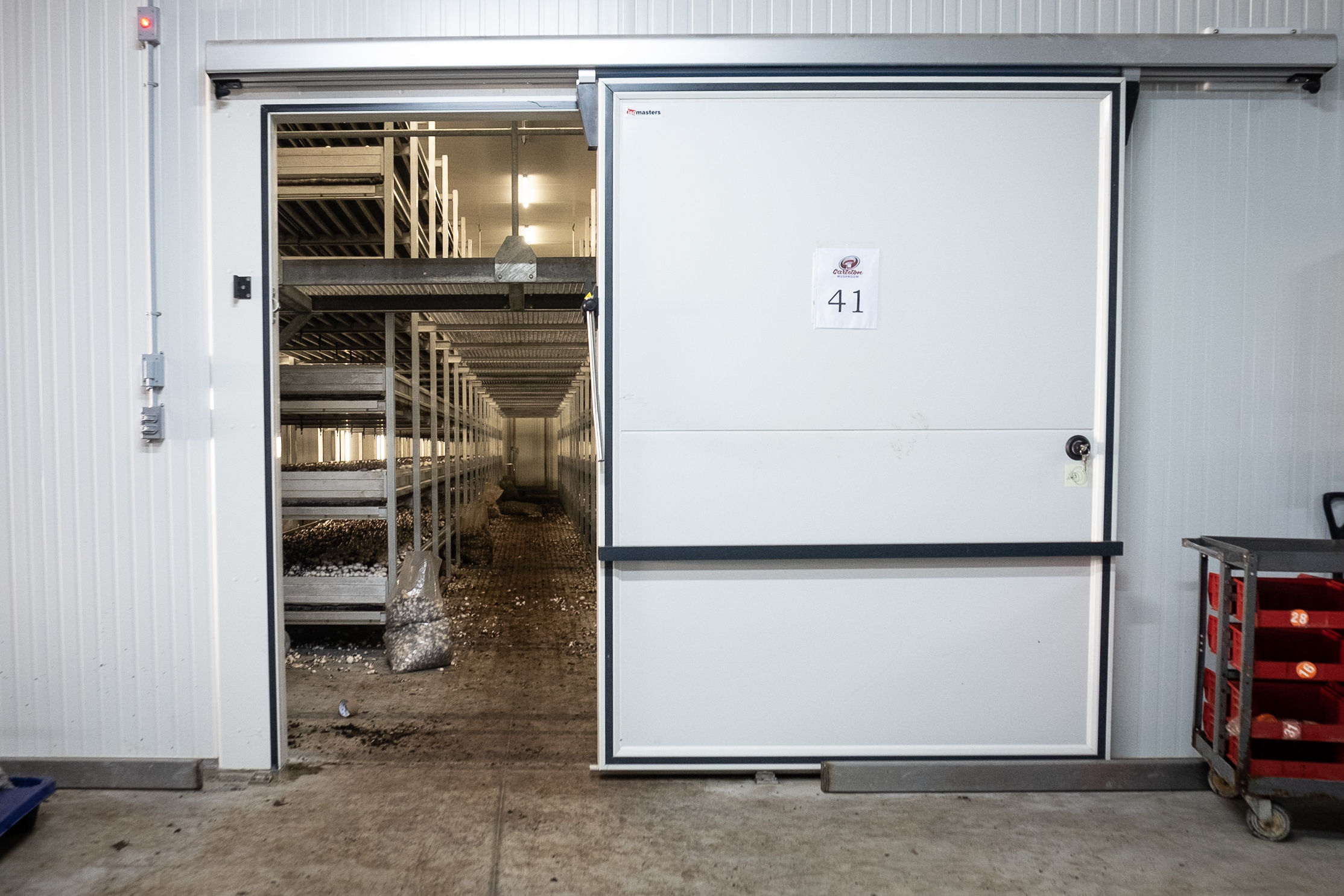 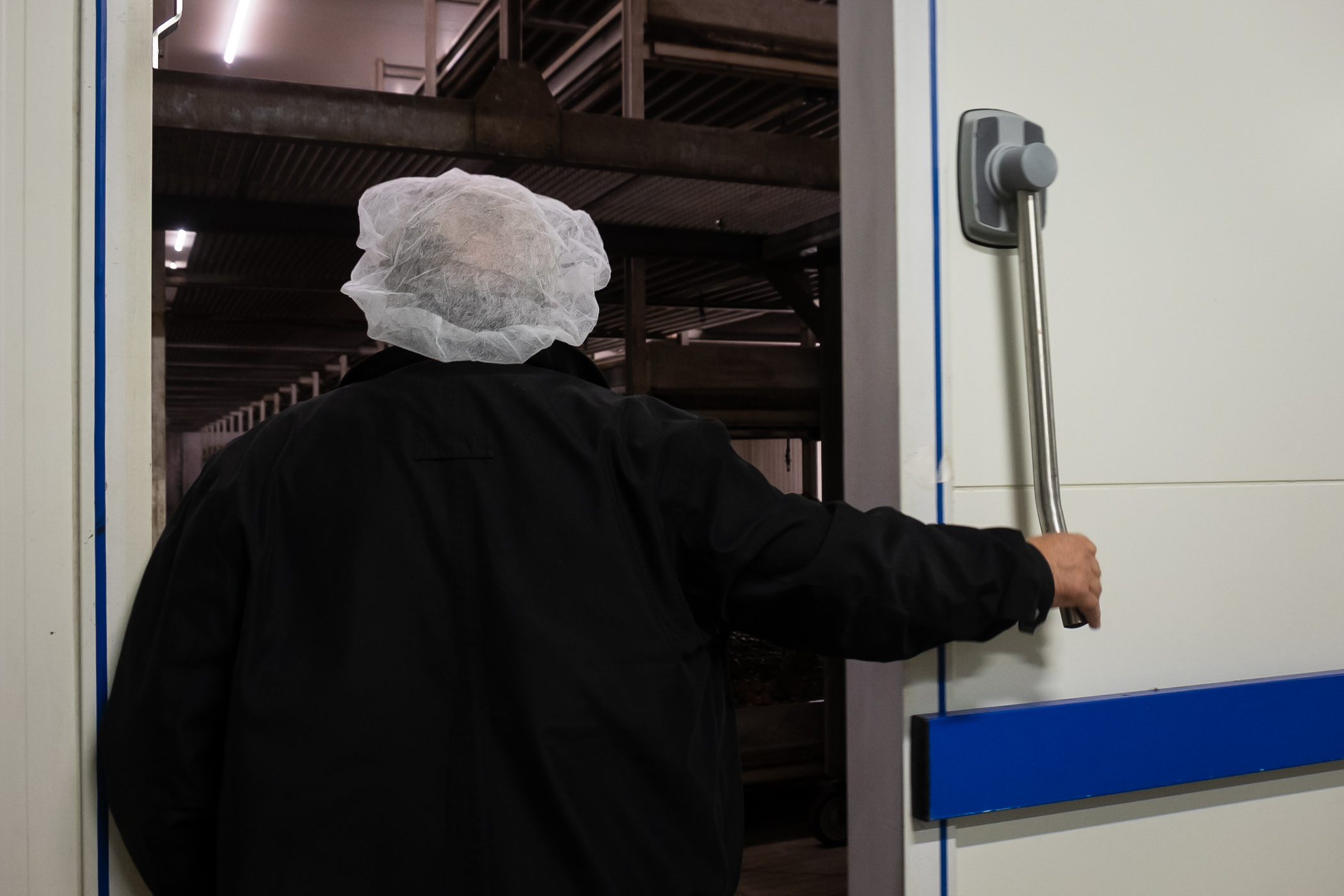 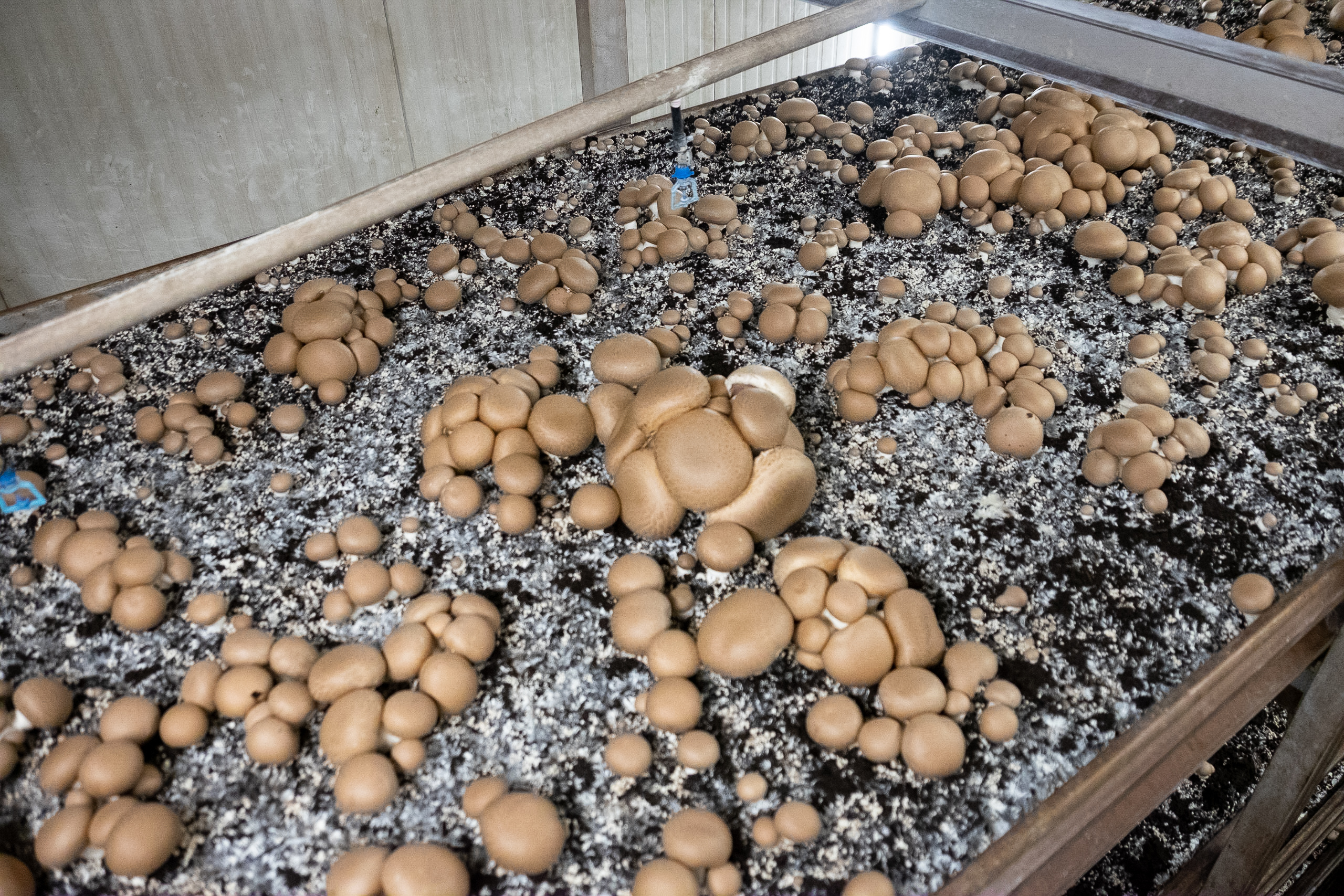 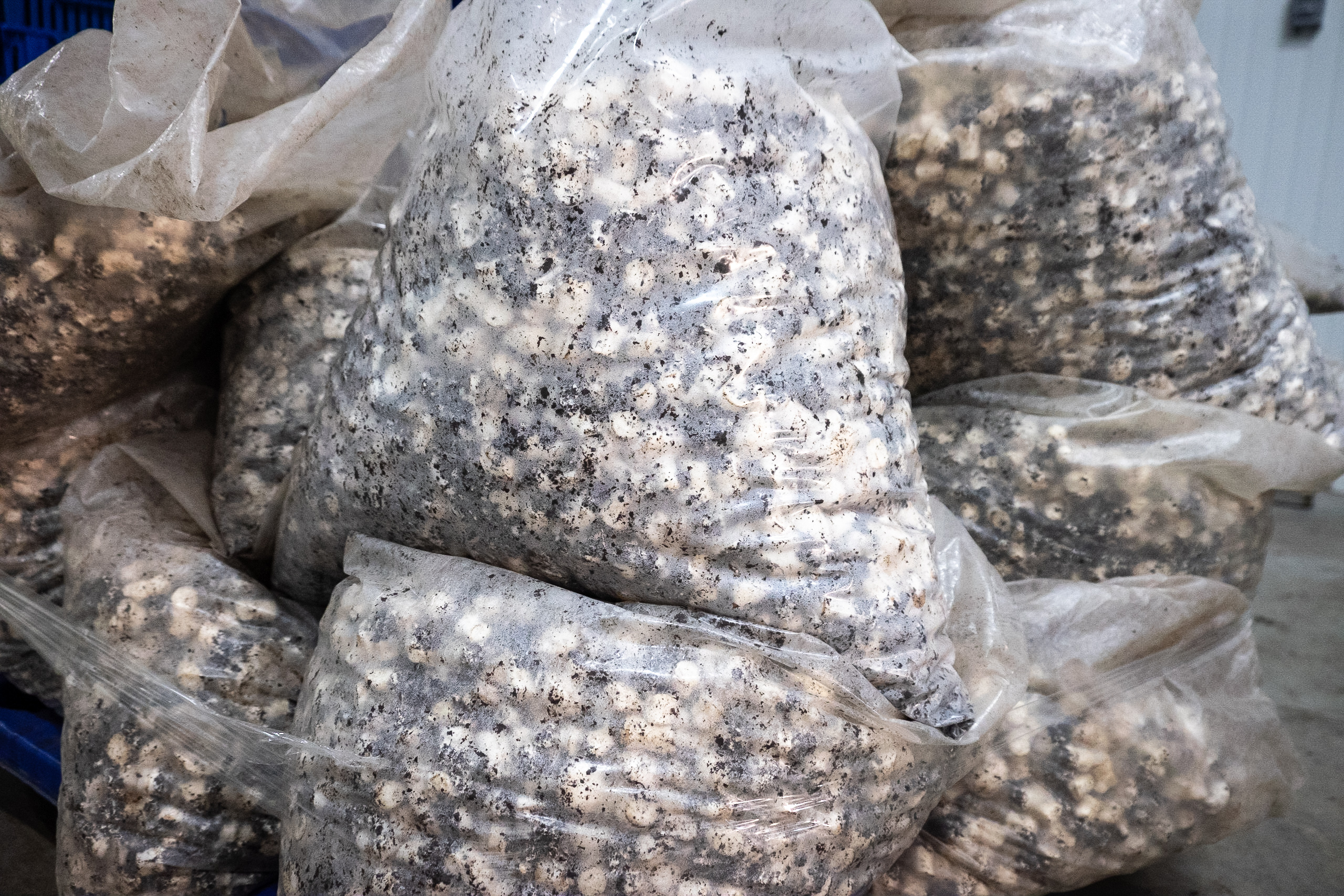 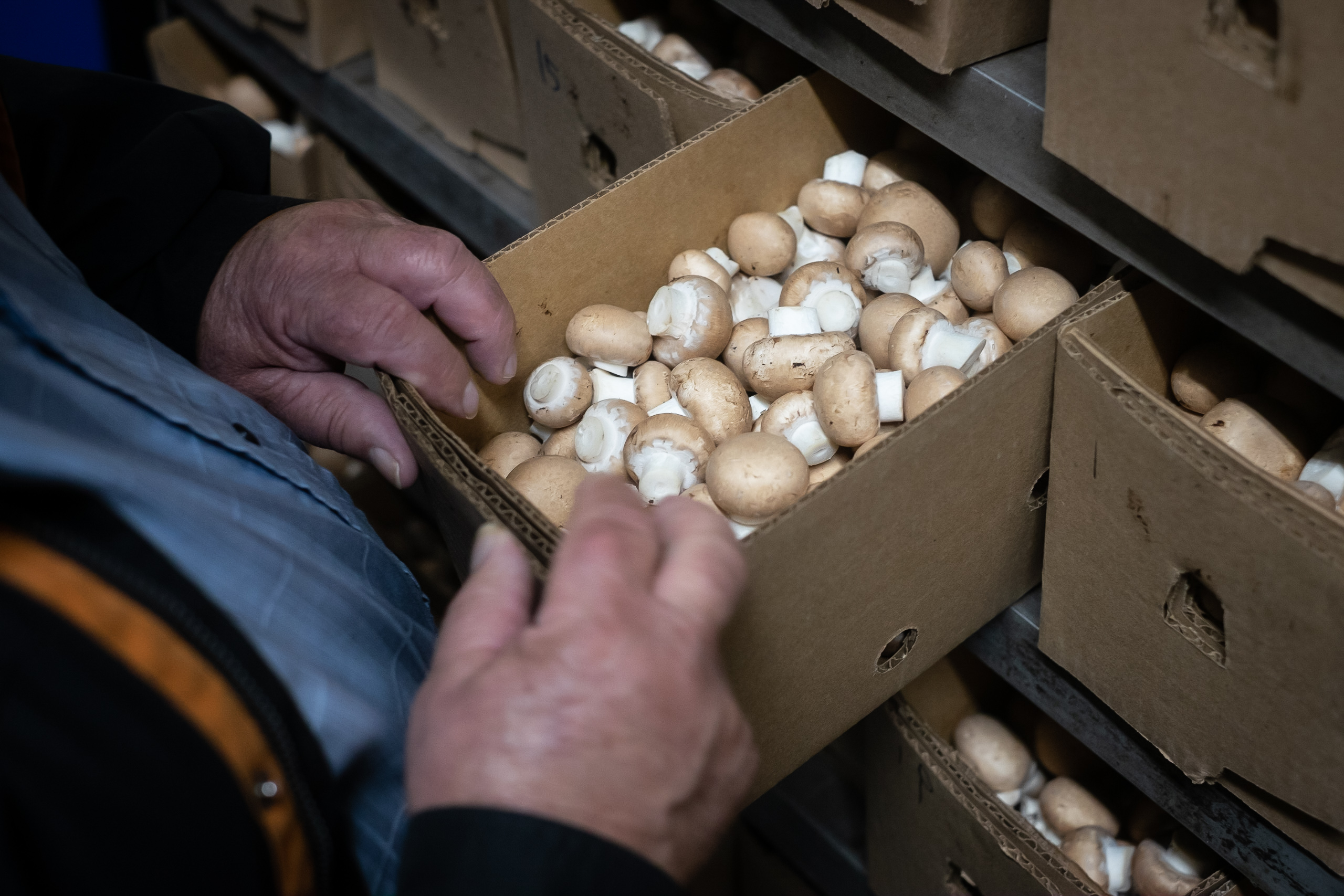 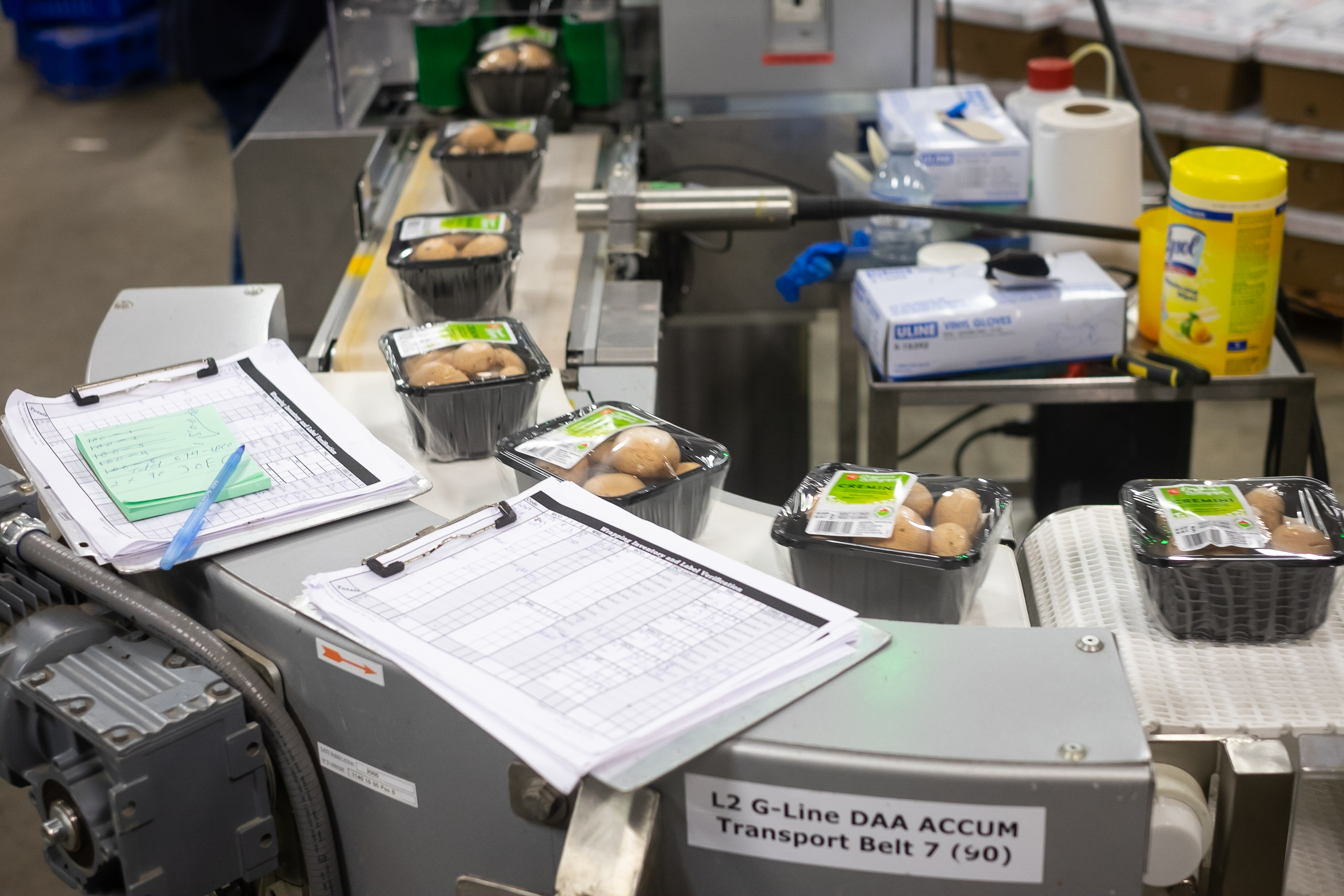 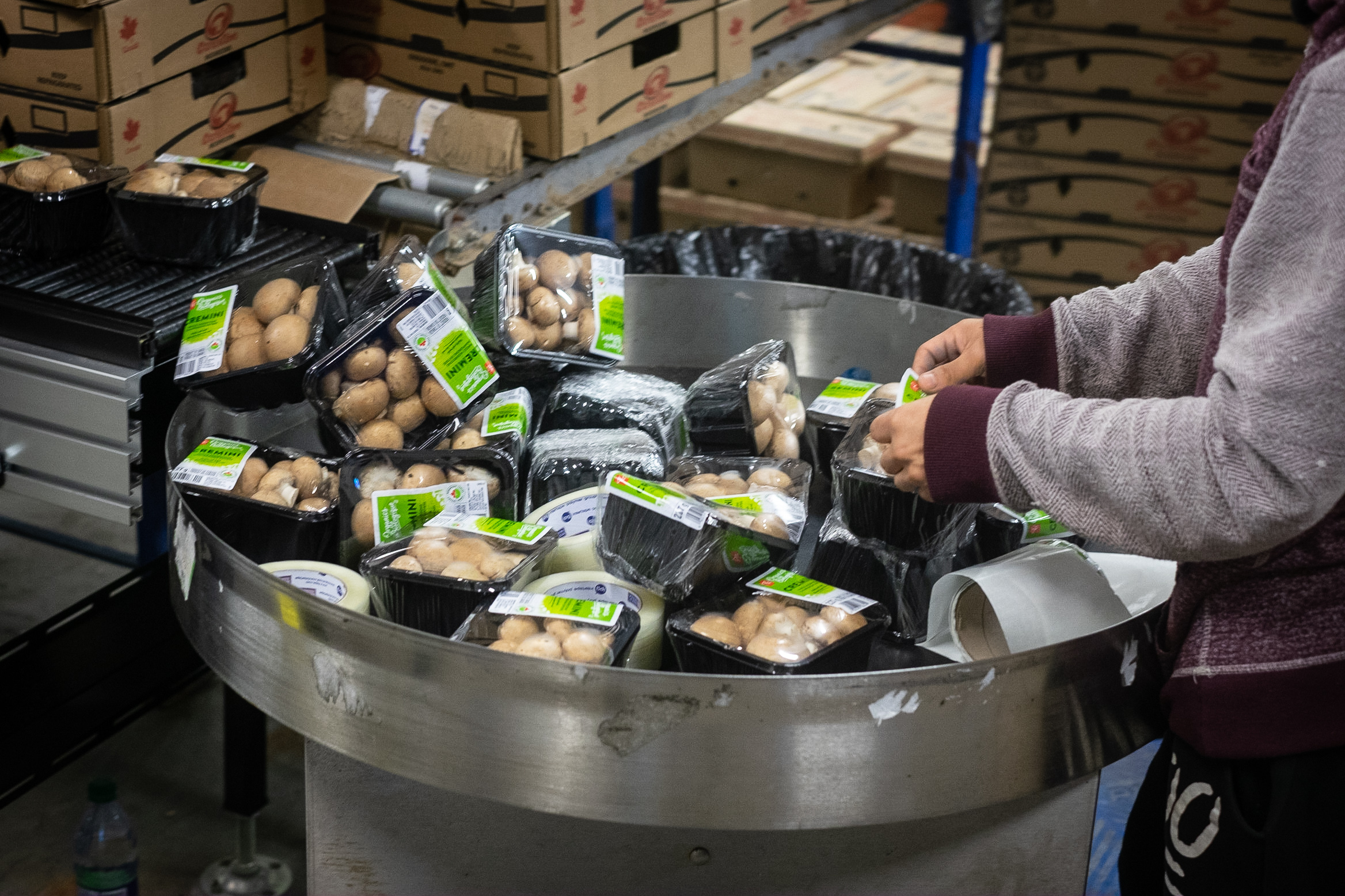 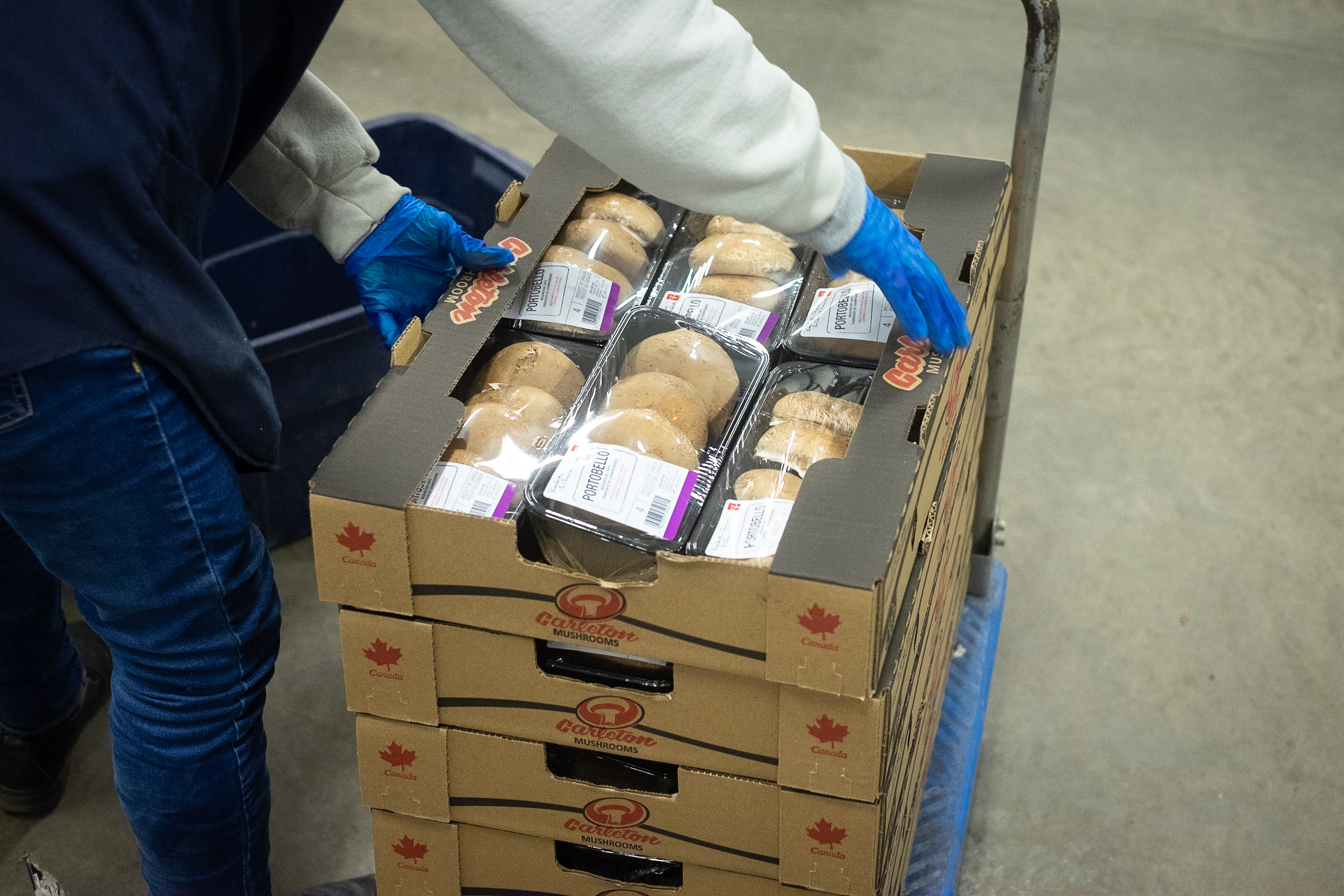 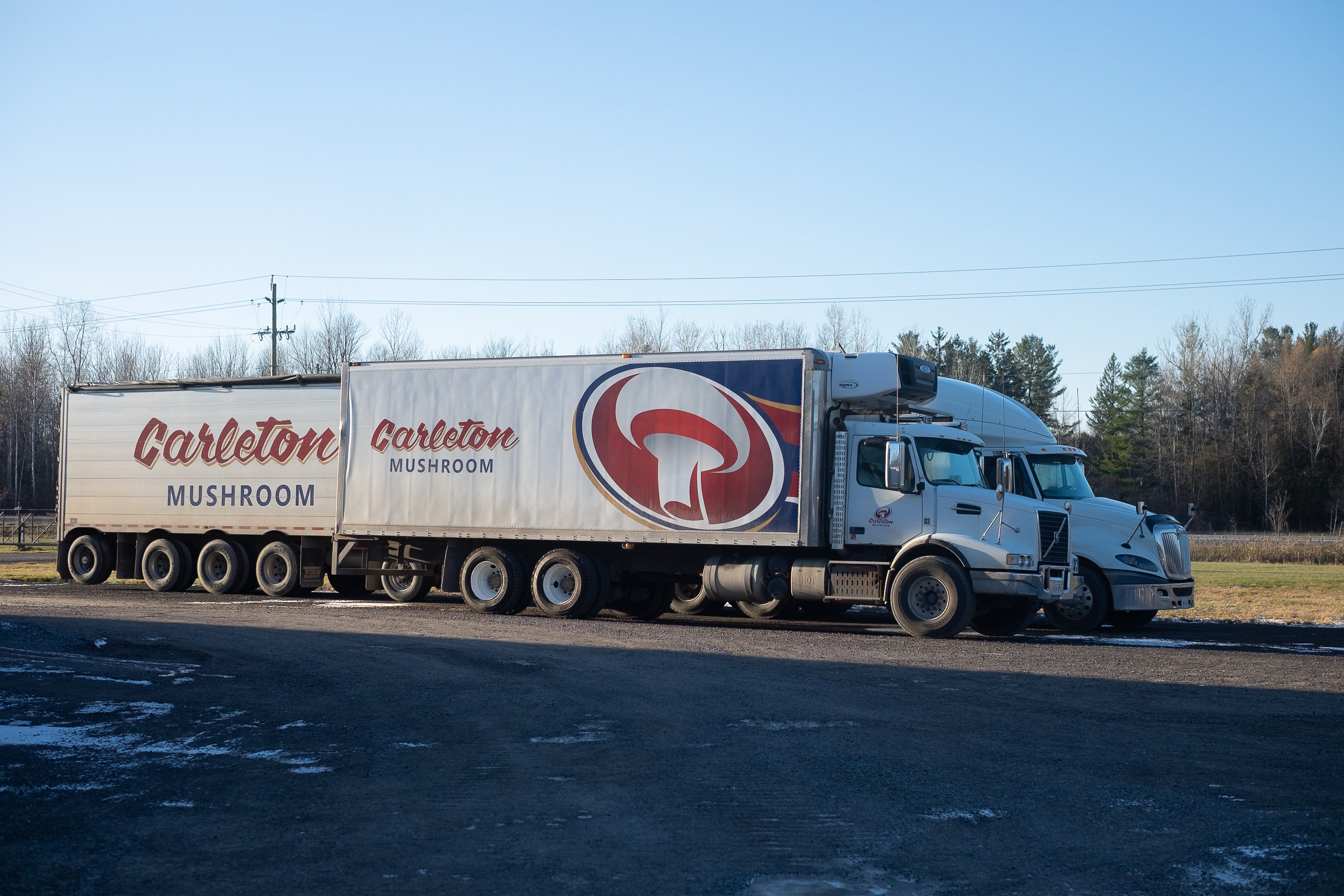 Photos illustrating the process of mushroom farming, from laying the mushroom compost all the way to shipping across Ontario and Quebec.
Photos by Dexter McMillan.

A better way to burn

Today, the farm ships 82 tonnes of white button, cremini and portobello mushrooms every week to Giant Tiger, Loblaws and Costco locations across Ottawa, among others. That’s more than triple the 2013 production.

Just five years ago, the business was faced with the grim reality of high energy costs after Continental Mushroom, another farm in Ottawa, was forced to close.

The Medeiros family had to find a way to reduce steadily-rising costs, or call it quits.

“The old farm back then [ran] on oil, which was a lot more costly,” says Medeiros. “We realized we needed to transition to propane.”

Mushrooms are farmed indoors in trays of dirt, each at a various stage in the fungi’s growth. The Medeiros brothers built propane-heated rooms to compliment the old oil-heated ones, and about a year and a half ago they converted all their rooms to propane. Since 2011, they’ve grown the farm from 10 rooms to an astounding 40 rooms, all heated with propane.

Fernando Sr., the family’s patriarch, began Carleton Mushroom Farms in 1984 with two partners, whom he bought out just four years later. He walks through the rooms and speaks with pride and nostalgia, pointing to upgrades they’ve made and obsolete machinery they’re looking to sell. 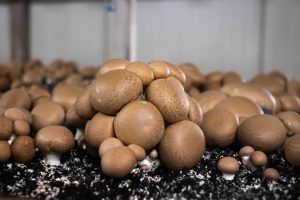 Clusters of crimini mushrooms. Crimini mushrooms are immature portobello mushrooms, harvested before the caps have a chance to bloom. Photo by Dexter McMillan.

Now, the eldest Medeiros describes himself as “semi-retired.”

In 2011, Fernando Sr. turned over the farm to his sons, Mike and Fernando Jr., who have overseen much of the farm’s growth since then. Fernando Jr.’s wife, Stacey Medeiros, does the farm’s accounting. His uncle is the manager and grower, and his aunt works in the packaging facilities.

Fernando Sr. still comes around and relishes every opportunity to show off what his family has built. 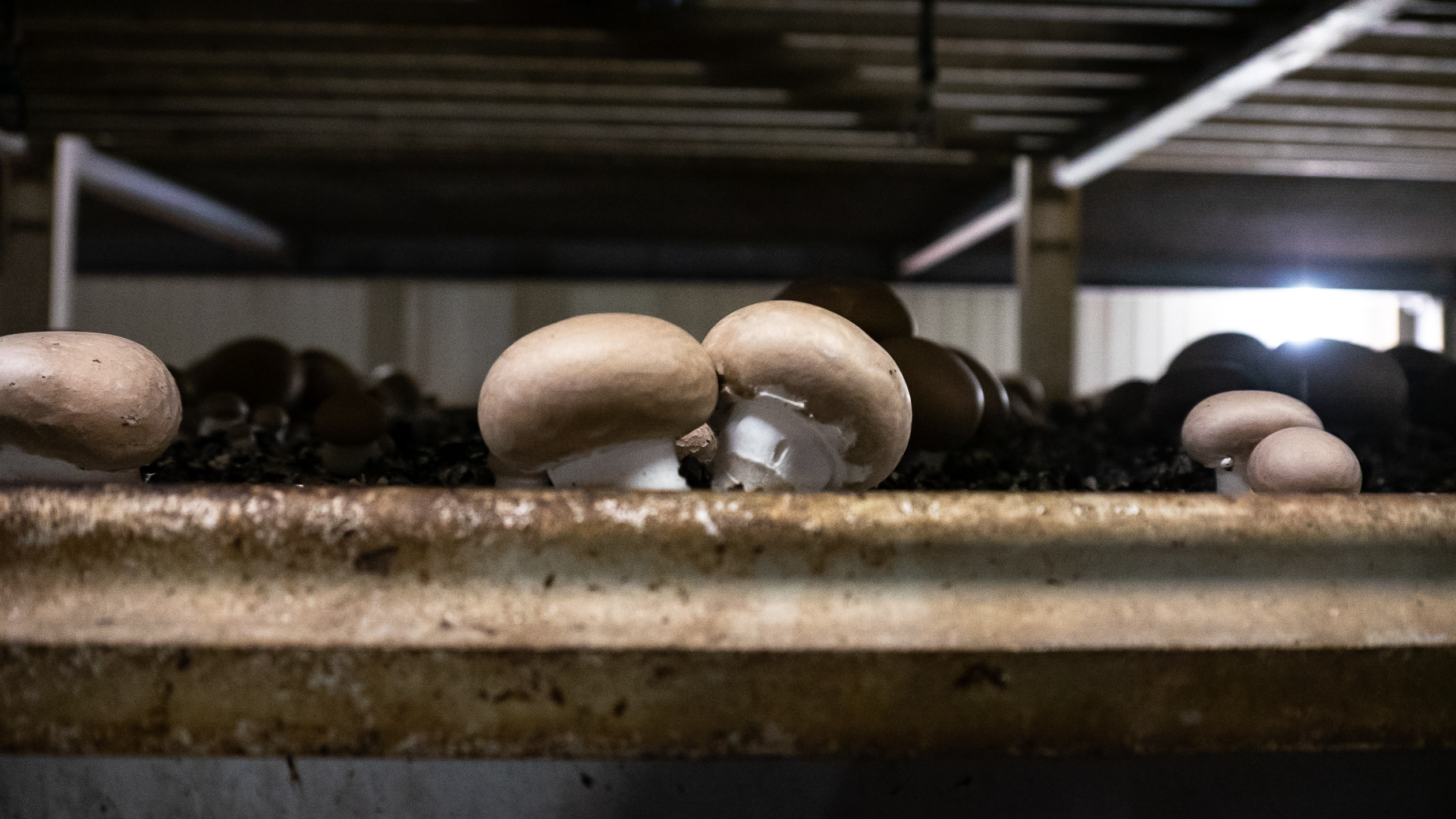 At Carleton Mushroom Farms, a successful farm and cleaner, more environmentally-friendly operations are one and the same. Mike, however, is not done improving.

“We’ve been trying to get natural gas for five years now, and it’s just been an uphill battle,” he says, a faint sigh escaping as he speaks. “It would be more economical for us to be on natural gas.”

Mike says Enbridge, the would-be supplier of natural gas, has regularly increased the cost of building a natural gas pipeline to the farm. It’s nearly tripled to almost $1.5 million since 2013. 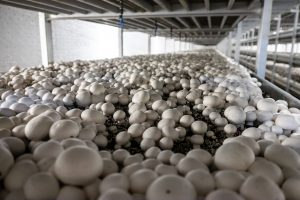 Although natural gas emits a greenhouse gas when it’s burned, unlike propane, its environmental impact is a fraction of that from burning oil. The savings are also substantial.

Despite barriers to bringing natural gas to the farm, Mike and Fernando say they are undaunted and will keep working towards improving their facilities, partly out of necessity. Fernando says that Ontario carbon taxes ratchet up the pressure to maximize efficiencies.

But chasing efficiencies, according to Fernando, is what farming is all about. “I’m looking at trying to do a four day delivery instead of seven, to have our trucks on the road less.”

Mike Medeiros’s frenetic workday full of interruptions now seems only natural, with each urgent phone message representing a lead on a new way for Carleton Mushroom Farms to get ahead. The Medeiros family has already reaped the benefits of efficient energy once, and natural gas is simply their next prey in an endless hunt for efficiency.