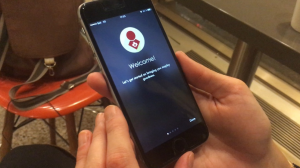 In a brightly lit café in downtown Ottawa, a young woman glances up from her phone. Her eyes shift and she gives an awkward giggle. Why the laugh? Marie Bourgeois, 23, is being asked some very personal questions by the dating app she is signing up for. The app is asking how she feels about monogamy, her HIV status, and interestingly, if she would ever date someone who voted for Donald Trump.

Bourgeois has decided to try out the new dating app Maple Match. On its website the dating app refers to the “unfathomable horror coming soon” in the wake of Donald Trump’s election and says it seeks to “revolutionize how Americans and Canadians date.” On the night of the presidential election, Maple Match reported on Twitter that its users had more than tripled in number, and the servers had crashed.

The Maple Match site was launched in May but was not publicly available on iPhone until Nov. 5, just days before the Nov. 8 election. The app’s creator Joe Goldman is based out of Austin, Texas, and Maple Match’s hashtag is #makedatinggreatagain.

Creating an account on Maple Match begins with writing a profile description and uploading photos. Users can also fill out other fields such as gender and nationality. Bourgeois writes, “Hope you like poutine guys! French Canadian willing to meet cool people :)” And for preferences, she ticks the boxes for males from United States, Canada, and Everywhere Else.

Next, the app provides a feed of other users that can be messaged directly—no swiping required. Unlike other apps, Maple Matches uses “dealbreakers” to generate a list of matches. For example, if a user indicated on a survey question that they would never date someone that owned a gun, the app would use that information to inform who shows up as a potential match. Survey subjects include habits, romance, personal, and of course, politics. Some of the questions include how the user feels about gay marriage, gun regulation, and abortion. Bourgeois’s eyes widen as she reads questions regarding sexual promiscuity and STDs.

After answering a handful of survey questions, she exclaims “ooh!” as other users begin to pop onto the screen. She giggles and points out that the default image for accounts missing profile photos are cartoons of Canadian and American bacon holding their respective flags. The caption reads “no photos eh?” Bourgeois selects a brunette man in sunglasses that she would like to start a conversation with, but the messaging function takes a while to load. The next day, an American user named Eric asks her if she’s interested in a sham wedding.

Josh, a user from Bellingham, Wash. who didn’t share his last name, said he finds the app “extremely glitchy.”

“I suspect it’s something that will work out in time, and I also suspect they have more business on their hands, with everyone trying to escape a Trumpaloompa supervillain,” he wrote in a direct message. Josh said he tends to frequent dating sites and is happy he’s getting a lot of attention on the app. But he said barring “the worst possible scenario,” he is probably staying in America.

“Tongue-in-cheekily the main reason I set up the account was because I want to escape the orange terror. The real question is will I follow through and try to emigrate, which really depends on actually how terrible he ends up being,” he wrote.

Maple Match also caught the attention of 27-year-old Julia Price in New York City. She signed up for the app on Nov. 8, just prior to the election.

“Leaving the country is kind of an ongoing joke but it was funny that there was this dating app that was catering specifically to it,” she said in a phone interview. Price giggles as she recalls that one of her matches opened the conversation with “So what’s your escape plan?” Price laughs at the idea of marrying a Canadian for emigration purposes and said she isn’t seriously considering it herself.

“I do think it’s kind of my job to stay here and be part of the change of what happens next,” Price said. “What would happen to the country if people like me all left? But, that being said, I did sort of want to talk to people for fun to see what they were doing.”

Marina’s early love of nature and wildlife led her to complete a Bachelor of Science degree in zoology at the University of British Columbia-Okanagan. After university she worked at La Hesperia Biological Station in the cloud forests of Ecuador and travelled throughout much of South America. During her eight months of geographical and personal exploration, Marina began a travel blog which piqued an interest in writing. She realizes the many communication gaps that exist between science and the media and hopes to bridge this schism. Current topics of interest are scientific discoveries and innovations, environmental philosophy and sustainability, and the search for a quantum theory of gravity.