Family festivities for the Ottawa Redblacks

The victorious return of the Grey Cup to Ottawa after 40 years became a family affair.

Crowds of school children joined the victory parade because freezing rain gave many a snow day.

After a victory parade reached TD Place, Redblacks quarterback Henry Burris hobbled his way on stage with his two sons to an eruption of cheers from the audience. Burris, the oldest quarterback to win the Grey Cup, was named MVP for his performance in the championship game Sunday. 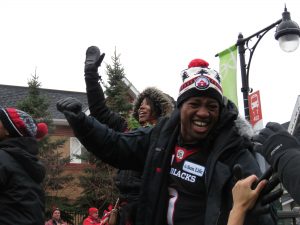 The crowd decked out in red and black chanted “One more year, one more year.” It is widely speculated that Burris might retire after this year, especially now given his knee injury that pulled him out of warm-up on Sunday.

Standing on crutches in front of his team and beside his two children, Burris simply said, “I have to be a daddy.”

“It began as a dream to bring the CFL to the nation’s capital,” said Redblacks president Jeff Hunt during his speech after the parade. “We had a vision 10 years ago, and it was this.” Bringing the Grey Cup home, in other words.

“It’s an amazing story,” said John Murray, a long-time fan of Ottawa football who attended the parade with his daughter, Breanne. “It’s like a storybook to have a new franchise win in three years.” 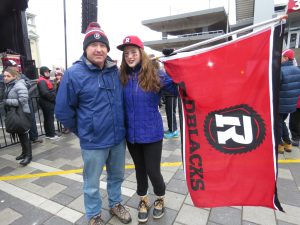 John Murray, long-time fan of Ottawa football, waits with his daughter Breanne for the Redblacks parade to start | Rachel Levy-McLaughlin

Breanne Murray waited patiently with her dad at the front of the stage before the parade, sporting a large Redblacks flag and eye black stickers. Though school was cancelled today, she said she likely would have come to the parade anyway.

Patrick Marshall, who has been a fan of Ottawa football for 40 years, told his wife after the win on Sunday that he would be pulling his kids out of school to celebrate with the Redblacks on Tuesday. Watching Ottawa football is something the Marshall family does together, he said.

“I’m a season ticket holder,” said Marshall, “so I’ll bring my kids to the game,” alternating who gets to go.

Even the Redblacks players were echoing tones of the importance of family during the parade, several of them bringing their kids on stage as they were introduced to the crowd of R-Nation fans.

The celebration began on Monday as the players returned to Ottawa ahead of the parade.

The upset Ottawa win in the Grey Cup championship game on Sunday was a classic example of the underdog’s success. The Calgary Stampeders were widely recognized as the stronger team having won 15 of 18 games this season.

The Redblacks were leading by 20 points shortly after half time, but the Stampeders charged back and forced the game into overtime.

Ernest Jackson bobbled but ultimately caught a critical pass during overtime from Burris, bringing the game to the final score of 39-33. 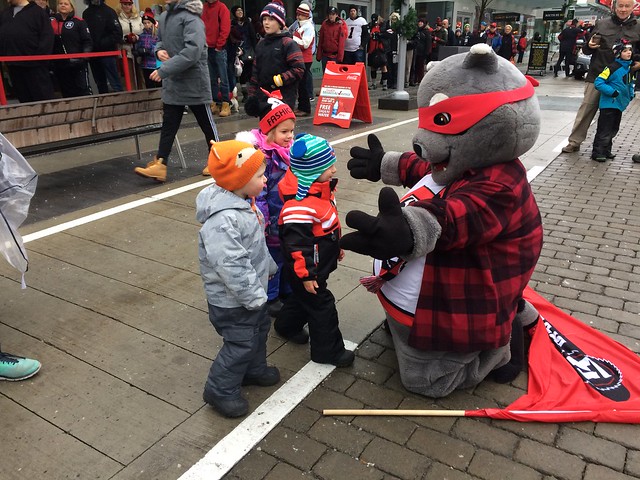