From Dumpster to Dinner: Dumpster Diving in Ottawa

Home » Features » From Dumpster to Dinner: Dumpster Diving in Ottawa

Garbage bags fly out of a dumpster in a back alley at midnight. Organic potatoes, kale, and chanterelle mushrooms spill out onto the ground. Afnan Khan’s head pops out from inside the bin. He climbs out and picks up the produce, cleans it on his shirt, and places it in a backpack. Khan is an urban food hunter – also known as a dumpster diver.

“Everything you could ever want is thrown away,” said Khan, 20, an Ottawa resident. “There’s an abundance of food in the dumpsters of Ottawa that not many people realize exist.” There are few 20-year-olds in Ottawa that spend a Sunday night waist-deep in garbage–foraging for food.

Dumpster diving is a modern form of salvaging waste in large commercial and residential trash cans. As the cliché suggests, one person’s trash is another one’s treasure, or in Khan’s case, dinner. Working only a couple days a week at a weed dispensary, Khan finds it hard to pay the bills. At least with dumpster diving he eats well. Perhaps even better than most, as organic food tends to be more pricey. 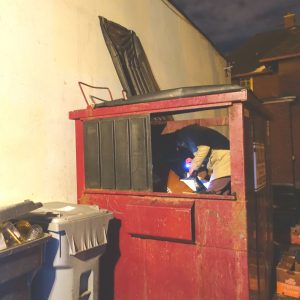 Khan foraging in a dumpster in Hintonburg | Photo – Liam Harrap

With winter approaching, dumpster diving is about to get better for Khan.

“Although produce freezes faster in the winter, it’s prime time for diving as the cold extends refrigeration time,” said Khan. He prefers larger dumpsters as they retain the heat longer.

Khan has been diving since February, going a couple times a week. He collects discarded food from supermarkets, bakeries, and health food stores, taking what he needs and giving away the rest.

“It was Afnan that got me into diving,” said Pamela Taplay, 23, who works in social services in Ottawa. “I owe him a lot.”

“It can be hard to start off on your own, but once you have a method, it’s easy,” said Taplay. She runs her hands through her purple hair and giggles. She’s made good friends jumping into dumpsters.

She got into diving using Facebook. Taplay said she always posts on the Food Movement Facebook group when she’s about to go diving. Social media has helped divers organise, meet, and raise awareness about food waste. Taplay says the more people she can introduce to dumpster diving culture, the better.

“Since June, I’ve spent $190 on groceries. The rest I’ve gotten from dumpsters. I eat like a king, all organic,” beamed Taplay. Sometimes Taplay trades her dumpster finds for other kinds of food with her neighbours. Organic kale and zucchini for olive oil. She buys as little food as possible, preferring to trust in the bins, even during winter. She just puts on more layers. 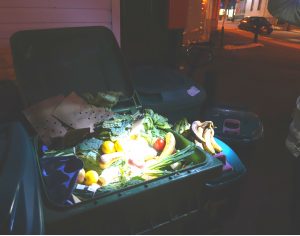 Produce freezes fast in the winter. Per Kohn, larger dumpsters are preferable as they retain heat longer | Photo – Liam Harrap

Taplay said she doesn’t dive for financial reasons, but because the amount of waste generated in society is disgusting.

Canadians threw away $31 billion worth of food in 2014, said Value Chain Management International, a consulting firm. According to the David Suzuki Foundation, over 30 per cent of fruit and vegetables in North America were thrown away before they made it to grocery store shelves because they weren’t aesthetically pleasing.

“We live in a society, where perfection is worth everything. Ugly food needs love too,” said Taplay.

Admitting you’re a dumpster diver can be awkward.

“I don’t tell people I dive. People tend to wrinkle their noses at it,” said Jordann Foster on a phone interview. Foster recently moved to Kamloops for school, but has dumpster dived for four years in Ottawa during her undergrad at Carleton University. She said diving in Ottawa is easy, far easier than Kamloops, where dumpsters are frequently locked. Her go-to for two years was the Greenboro Walmart.

Although dumpster finds may vary, some items appear often.

“We usually always found yogurt. Nobody wants to buy past the expiry date, but it’s usually fine for months,” said Foster.

Opinions about dumpster divers from stores in Ottawa are mixed. However, some have embraced the diving culture.

“We’re totally fine with dumpster diving. Sometimes we even put food beside the bin for people to take,” said Kirk Jordan, an employee at the Herb and Spice on Bank Street.

While dumpster diving isn’t illegal, stores can call the police if the garbage bins are on private property. However, neither Khan, Taplay, or Foster have had any trouble. 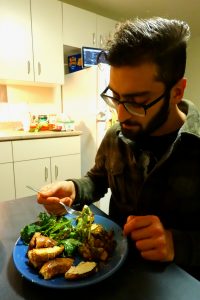 It’s easy to eat well in Ottawa, if you know where to look, said Khan | Photo – Liam Harrap

After going through four dumpsters, Khan’s backpack and a large cardboard box is overflowing with food. He hobbles to a bus stop and catches Carleton 4 home. Panting under the weight of the food, he’s happy a seat is vacant. The amount he took was only a small portion, he had to leave cases of Cheese Whiz, yogurt, bread, and vegetables. He can only carry so much.

Khan cooks a dinner of pan-sautéed peppers, onions, kale, broccoli, garlic, and potatoes. He drizzles it with lemon, olive oil, a sprinkling of spices, and topped with an egg. The meal is accompanied with an organic tossed leafy green salad, bagel and served with a glass of lemonade. It’s the kind of food you’d find in a bistro or a sidewalk café. You’d never guess it’s from an Ottawa dumpster. Just because somethings garbage, doesn’t mean you can’t turn it into a gourmet dish. Bon appetit.