Giving Tuesday is a global movement dedicated to giving back to communities. Individuals and companies are participating in charitable acts across the capital region today.

Watson joined the morning meeting wearing a Redblacks jersey and thanked the group for their contributions to the community and to Giving Tuesday. The mayor first spoke to the meaning behind the movement and the importance of charity. 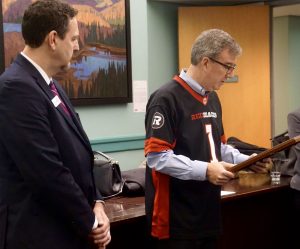 “We get wrapped up in our own busy worlds, as we all know, with work and family, you know, driving kids to soccer and hockey and everything else,” Watson said. “And we sometimes forget there are still a lot of people out there that need our help.”

Watson said that Black Tuesday and Cyber Monday help bolster the economy but suggests that Giving Tuesday allows the community to give back. “It is fitting and proper on Giving Tuesday, and on every day, to recognize the tremendous impact of philanthropy, volunteerism, and community service in the City of Ottawa,” Watson read from the proclamation.

Tuesday gives Canadians an opportunity to give back after a busy weekend of shopping. Ultimately, the Giv3 organizers want the days to be equally recognized. “If you’ve heard of Black Friday, we want you to hear about Giving Tuesday,” said Hugesson over the phone on the movement’s long-term ambitions.

“We don’t stand for any one cause at all. It’s really whatever is closest to people’s hearts. So it’s a very, very inclusive movement and we really believe something that all Canadians can get behind,” said Hugesson.

“The growth of the community movements has been really key,” she said. “So this year more than ever we’ve got a lot of local organizers, and that’s amazing.”