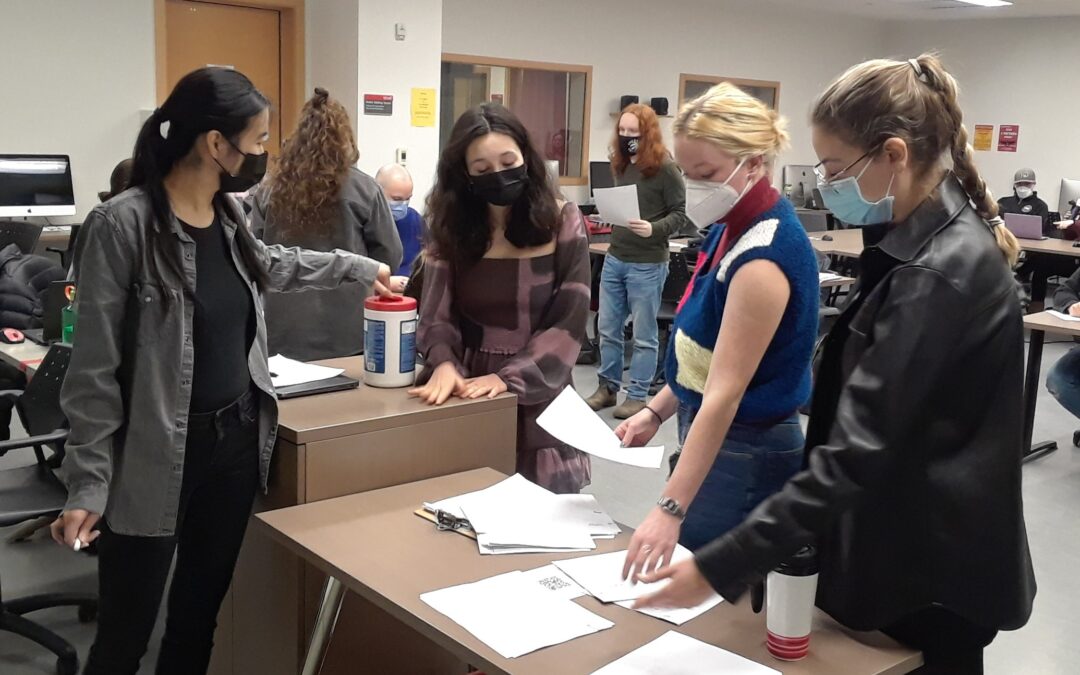 The top stories on this week’s Midweek show called on listeners to have the heart to think about the struggles and suffering of those who are too easily overlooked: 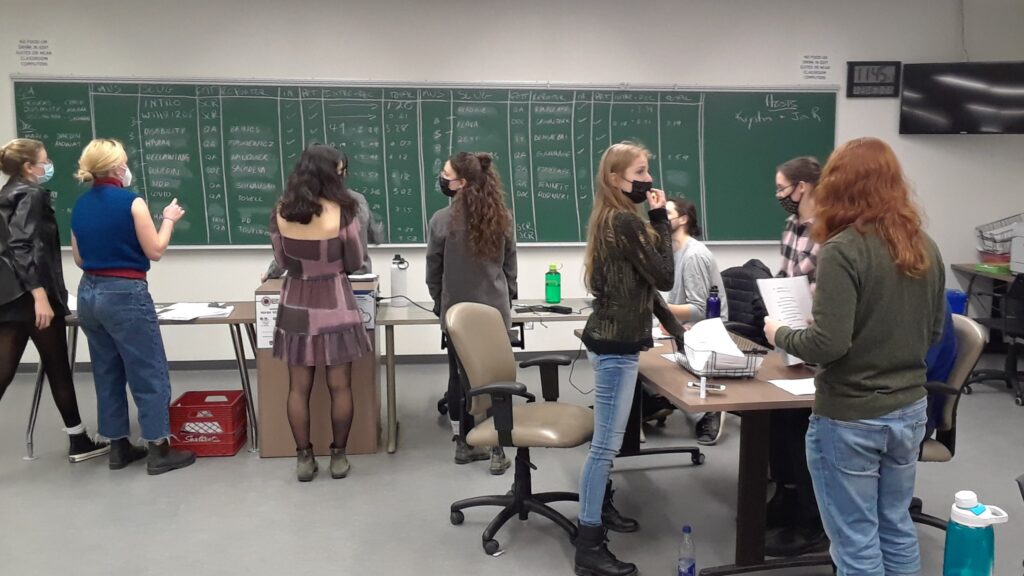 The production team make final preps for the show in front of our lineup board. Check the clock: we go on air in 20 minutes!

Jack Baines reported on the hardships faced by Ukrainian refugees with disabilities and the extra care needed to resettle them; Krystin Ptaszkiewicz looked at the need to step up harm-reduction programs to help young adults caught in the ongoing opioid crisis; and Morgane Wauquier told us about plans for a new law in Quebec to ban non-therapeutic surgery for animals, such as cat declawing or dog devocalization or the docking or cropping of tails and ears.

Not all needless suffering is human, after all.

Spring is coming slowly — and soon quickly — and that means baseball season is on its way. The pandemic has prevented many hardcore Toronto Blue Jays fans from making the trip to Dunedin, Fla., to catch pre-season games, but social media has filled the gap for some, as Midweek’s Amisha Sachdeva found out from a fan who’s using Twitter to talk baseball and autism.

The federal Liberals and New Democrats have announced they’re teaming up in Parliament, and Tuvana Sahinturk asked a Carleton University political scientist what that might mean. Midweek’s Jonathan Tovell, meanwhile, looked into what relaxed mask mandates might mean to Ottawa neighbourhoods with particularly high COVID-19 infection rates.

But back to Spring: yes, it means the crack of the bat — but also the tap of the the tree! Sarah Pledge Dickson went off to the sugarbush at Proulx Farm in Ottawa’s east end to check out what’s going on along with the sap collecting. 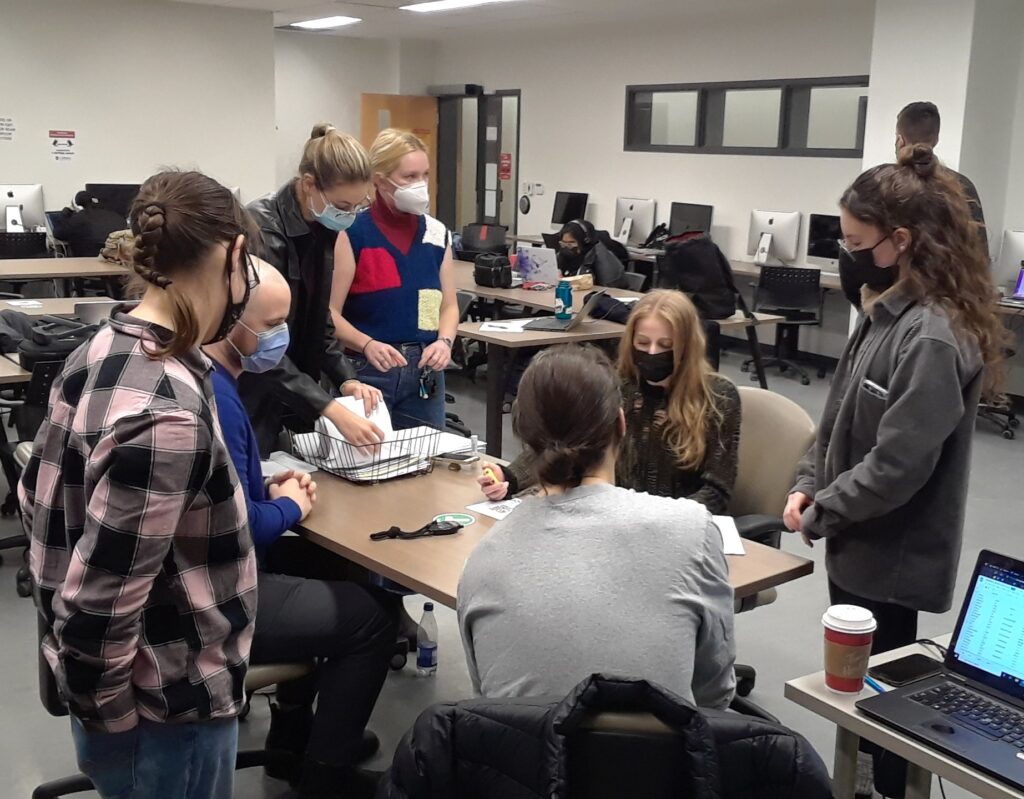 Speaking of trees, Jonathan T. got tips on keeping a backyard palm tree alive and thriving in Ottawa’s non-balmy climes. And then Sarah was back with a report on how Carleton’s Ukrainian students club organized a virtual pierogi-making night fundraiser. (That’s the Polish word — it’s more commonly varenyky in Ukrainian — and plain old blah perogy in Canadian Press style.)

Tuvana then moved from the political beat to the beat of the street, taking us to The Flava Factory dance studio to enjoy its return to in-person, inclusive classes. Also back meeting in person were the close personal friends who make up Ottawa City Council, and Jack Baines told us how that went — and the tribute that council gave to Zexi Li, the young Ottawa woman who stood up in court to the convoy protesters and their noise.

Midweek’s Melissa Gammage followed up on her report on human trafficking the previous week with an interview in this show with Wendy Gee, executive director of A New Day Ottawa, which provides a restorative residential program for youth who’ve been trafficked and are trying to start anew.

Eesha Affan called up the co-owner of a local daycare centre to check how they’re handling the loosening of mask policies in Ontario, and Andrea Bennett found out about one more thing that’s getting back to normal: this month’s Sīgwan Festival in Ottawa as an Indigenous celebration of Spring — which is what sīgwan means in Anishinaabemowin.

Next, host Jonathan Rudnicki shared his discovery that his grandfather had played a key part in the birth of Canadian writer Farley Mowat’s 1952 book The People of the Deer — a novel, but one that used the protection of that genre to expose a very real-life tragedy caused by government callousness and bungling that doomed an Inuit community.

Jonathan Tovell stories popped up in this show like mushrooms after a rain, and here he was again to report on…mushrooms and a local business growing them that popped up during the pandemic. And then Kail Schlachter wrapped up the show by asking passersby on the Carleton campus how they feel about what’s ahead this spring and summer as compared to last year. The answer: much, much better…kinda…we’ll see…