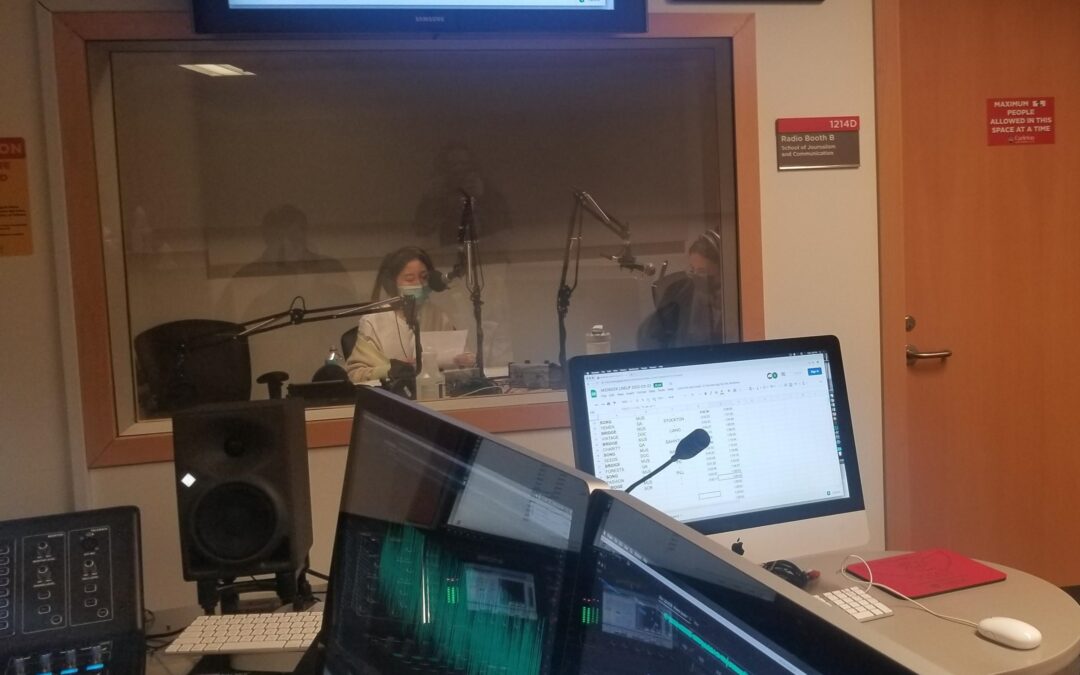 So let’s get one thing straight: Midweek is a show, not a newscast — so when we put a story at the top of the show, we’re not saying it’s the top story of the day or week — not as in most important.

We’re just…putting it at the top of the show, OK? Maybe as a starting point, or maybe to get it out of the way before we move on to other things. Just wanted to make sure that’s clear… 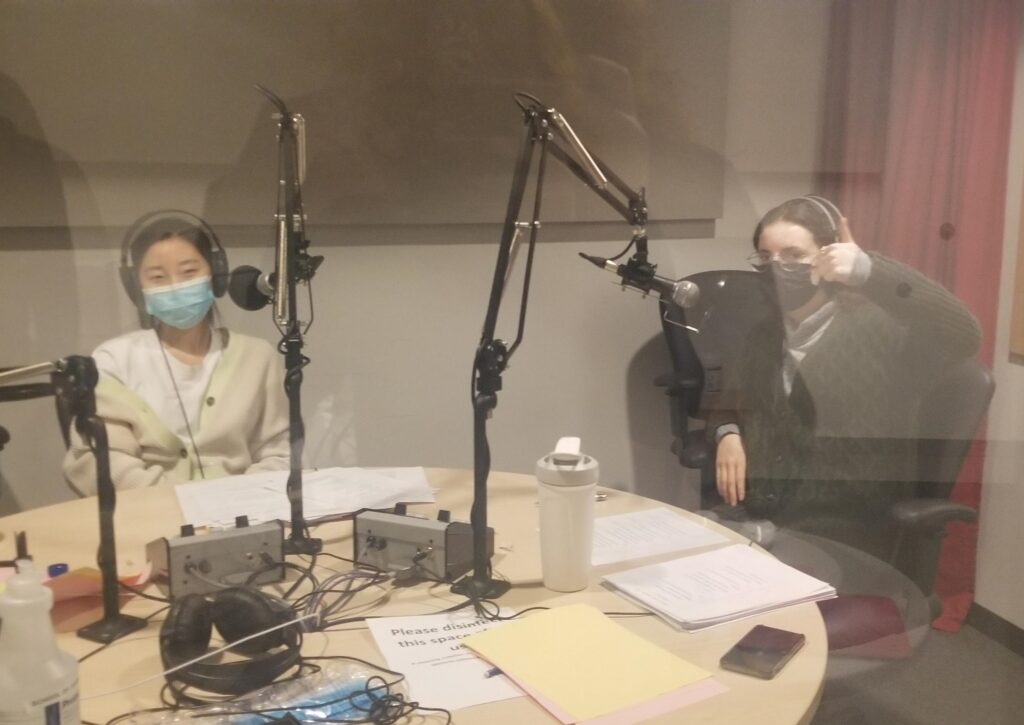 Thumbs up behind the studio booth glass from Sarah Pledge Dickson as she and Katherine Zhang co-host this week’s show.

…because the top — sorry! — the first story on this Midweek was a sampling of public reaction to actor Will Smith slapping and cussing out comedian Chris Rock at the 2022 Academy Awards ceremony. The general response was a dim view of both gents.

Onward from that: Midweek’s Amisha Sachdeva spoke with an activist about an overlooked impact of Florida’s controversial “Don’t Say Gay” legislation: its effect on asexuals. Then co-hosts Sarah Pledge Dickson spoke with a soccer fan about Canada qualifying for the FIFA World Cup for the first time in more than 30 years.

As a delegation of Indigenous leaders from Canada continued to press for a formal apology from the Pope for the suffering caused by Church-run residential schools, Midweek’s Jon Rudnicki reached out to the president of the Ottawa Japanese Community Association to ask what finally receiving an apology from the Canadian government for the internment of Japanese Canadians during the Second World War had meant to them.

A wave of refugees from Ukraine is expected to arrive soon in Canada, and Rose Danen checked in with an Ottawa group that helps new arrivals and others in need with setting up a home. Reporter Talar Stockton followed that with a sobering look at the impacts of so-called “long COVID” on those whose illness has lingering effects. 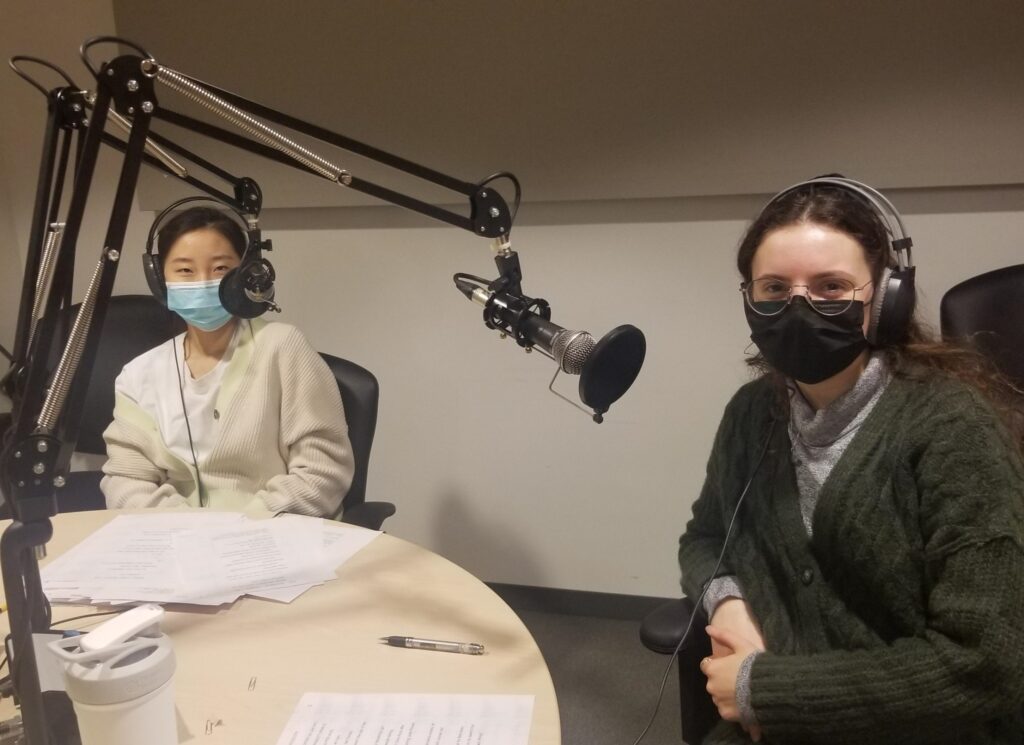 Our hosts in a calm moment

It seems every month is the “awareness month” for several different issues — but those who’ve named April as Autism Acceptance Month chose that name carefully; Midweek’s Kail Schlachter spoke to an autistic activist and researcher about the difference between acceptance and awareness.

The painstaking probe into the recent crash of a China Eastern Airlines passenger plane is just beginning, so Midweek reporter (and this week’s co-host) Katherine Zhang spoke to aviation experts about what that investigation will entail. And as the slow-motion disaster of our own opioid overdose epidemic continues, Midweek’s Krystin Ptaszkiewicz gave us a refresher on how to use naloxone treatment kits — and why we all should know.

Some learning is less ominous, though: Our reporter Tamanna Khan showed us an app called Banglaskool that’s making it easier and more fun for the children of Bengali-speaking immigrants to learn that language. Then Midweek’s Ben Sylvestre learned what happens when Ghostbuster cosplayers cross the streams of fun and fundraising.

Talar Stockton was back next with a reminder that while the world’s eyes may be fixed on Ukraine right now, suffering also goes on elsewhere as other wars drag on, such the humanitarian crisis in Yemen that’s been ongoing since 2015.

Spring’s arrived and yes, it’s a time of renewal, but Midweek’s Michelle Liang brought us a story about a vintage pop-up event held to encourage folks to re-old this year instead — by buying vintage clothing and home decor items. Tuvana Sahinturk then reported on a five-year study being started into Canada’s charitable sector, and Rebecca Weston brought tips on growing your own fruit and vegetables.

Sarah Pledge Dickson interviewed an organizer of an annual fundraising day by professional tree planters, and Ann Pill wrapped up the show with a look at the need for sustainable clothing so that fast fashions don’t fast kill our environment.