EAC countries like Tanzania, Uganda and Rwanda have a vested interest in fostering the growth of textile manufacturing as a means to add value to indigenous raw materials such as cotton and to create jobs in the process. These raw materials are exported at a low cost and only increase in value through each stage of production.

In an email, the East African Business Council (EABC) reiterated the need to maximize the value from their raw commodities such as cotton by using them in domestic textile manufacturing.

“Only 15 per cent of EAC cotton is processed locally, while 85 per cent is exported in the form of lint to other countries,” Lilian Awinja, CEO of EABC, commented.

Awinja says it’s time for EAC countries to begin manufacturing apparel “as the region works on a phase-out approach of imported second-hand clothes.”

Elsewhere, UK-based Plexus Cotton, also known as Fine Spinners, which operates integrated textile factories in Uganda, Mozambique and Nigeria, is focused on what it calls the ‘field-to-fashion’ approach. It partners with cotton farmers in Uganda to establish a vertical supply chain, that sends the local cotton to be processed and turned into garments at its factories in Mbale and Kasese. It sells their clothes to both the domestic and export markets.

These efforts to establish a thriving textile manufacturing sector are often beset by challenges involving infrastructure and technology. Paige Earlam, head of marketing for Plexus, said they have faced many challenges in setting up their field-to-fashion supply chain including a lack of electricity supply and a shortage of semi- skilled labour.

Despite the challenges, Earlam thinks countries in Africa have what it takes to compete with mammoth textile producers like China. China has already invested in a number of textile manufacturing operations in East Africa.

Efforts continue to be made by Uganda, Tanzania and Rwanda to foster domestic textile manufacturing with an eye on creating a skilled workforce to support it. In August 2016, Tanzania’s Minister of State Jenista Mhagama, announced that the government had begun a training program for youth to learn how to become tailors.

“We have organized a series of training for young Tanzanians so that they are well-equipped with tailoring skills, and who will be employed in the current clothes-making factories and those which are coming in,” Mhagama told the East African.

In October 2017, U.K.-based think tank the Overseas Development Institute released a report titled The phase-out of second-hand clothing imports: what impact for Tanzania?. The report concluded that the EAC’s approach to creating a textile industry geared for domestic consumption would not make its garment sector grow.

“So, garment and textile factories cannot produce at scale.”

Calabrese and her co-authors created the first estimates in the number and types of second-hand clothes imported to Tanzania. Their research estimates that Tanzanians’ total consumption of clothes both new and used is 720 million items, every year. 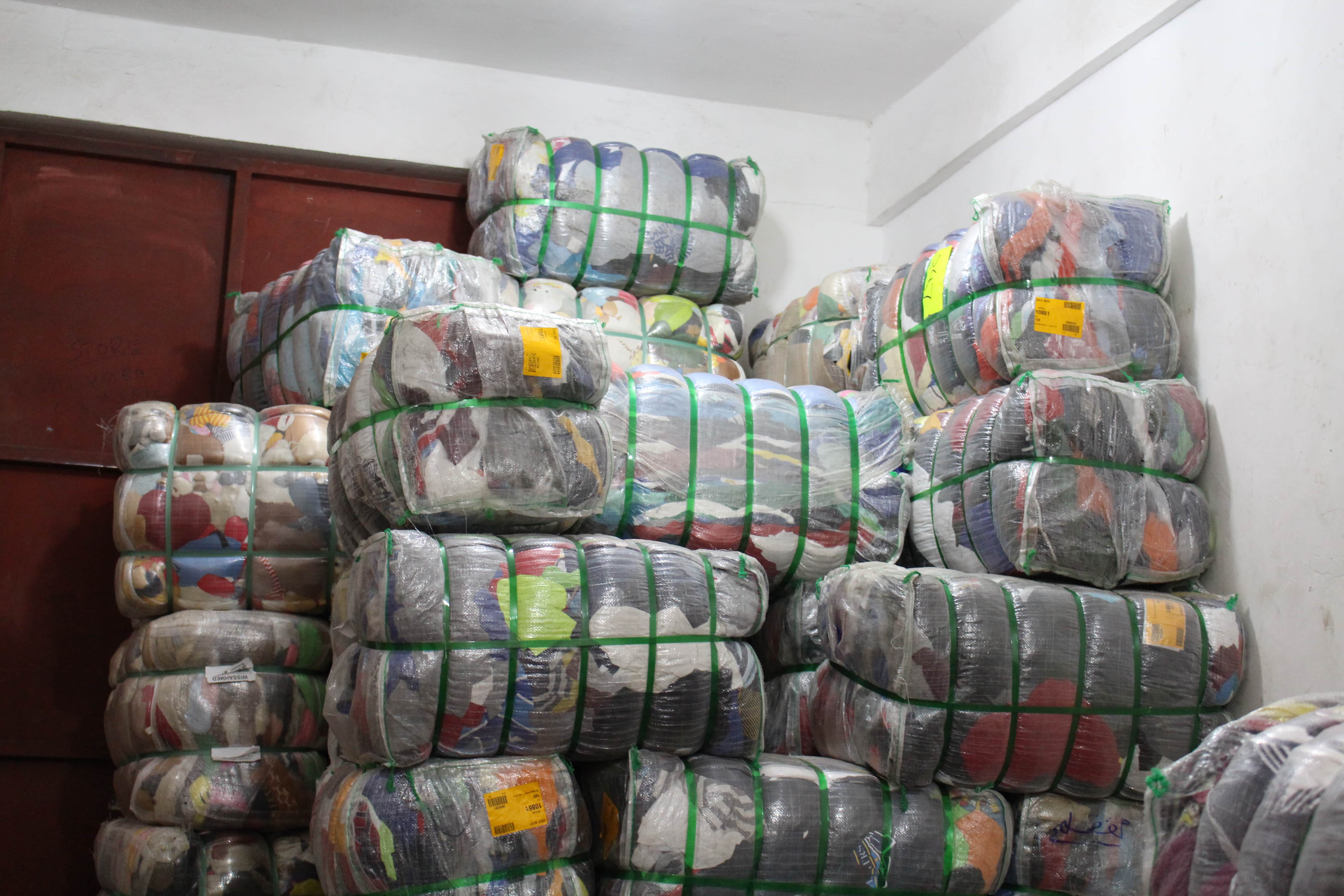 Bales of used clothes are stacked inside a warehouse in Arusha, Tanzania. (Megan McPhaden)

Current domestic production of clothing was estimated at 20 million pieces, leaving a major gap for producers to fill if second-hand clothes were to be phased-out.

“This estimate is important because it gives a sense of the magnitude of the second-hand clothing trade,” Calabrese said.

David Simon, professor of development geography at Royal Holloway University of London, agrees that phasing or introducing an outright ban on second-hand clothing imports isn’t going to enable domestic clothing manufacturers to restart, “unless you can restrict competition from cheap Chinese and perhaps now and again Indian imports.”

However, given Chinese investment in not only textiles but other sectors in East African countries, Simon says he can’t see the EAC imposing any meaningful tariffs on Chinese clothing imports.

While Calabrese’s research indicates that the EAC’s goal of producing textiles for the domestic is unrealistic, she does believe that in the long-term Tanzania and other EAC countries could successfully develop their garment sectors by focusing on exports.

“By focusing on exports, the East African governments would be able to produce at scale and generate employment and exports,” Calabrese said.

The EAC countries currently benefit from a number of preferential trade agreements including AGOA and the Economic Partnership Agreement with the European Union that give them unrestricted access to developed markets.