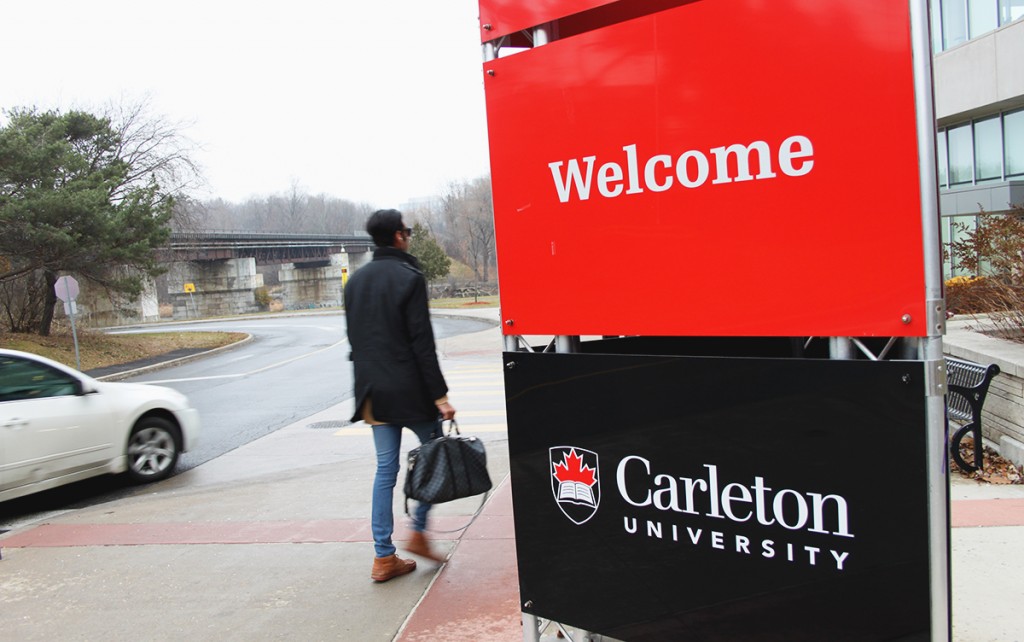 Carleton’s board of governors has faced criticism for new policy that prevents board members from discussing public meetings. THE JUNCTION/Olivia Bowden

At the doors of a November Carleton University board of governors meeting, Charlatan reporter Erica Giancola was greeted by university security officers clutching a sheet with her name and photo.

It was the first time they’d seen this procedure, said Kathleen Saylors, one of two news editors at the university’s student publication.

“They asked for our names ahead of time,” said Saylors.“They actually took her headshot from LinkedIn.”

Getting into these meetings is getting increasingly difficult, she said, an ironic twist in a growing controversy over free speech at the school.

The increased scrutiny of student journalists comes at a time when Carleton’s board of governors is facing mounting criticism from professors, the Canadian Association of University Teachers (CAUT) and journalists for implementing a policy preventing board members from speaking publicly about open meetings. The policy continues to apply to board members after they have served their term.

It prevents non-members from attending board meetings in person without prior approval from the board. The board instead insists that people follow along on a video live stream in a separate location on campus. The live streams are not archived.

Charlatan news editor Nadine Yousif said she believes the tightened screening for student journalists is a response to a meeting that was disrupted last spring by students protesting a proposed hike in tuition.

“That’s never happened before. It’s inconvenient as student journalists that we have to do that,” said Yousif. “There’s still a way to get in, there’s just significantly more barriers than there were before.”

Yousif’s comments follow a Saturday story in the Ottawa Citizen about the board gag order. The university, in an email Monday to the Carleton community, accused the paper of printing a “number of inaccuracies”

Ottawa Citizen reporter Chris Cobb, who wrote the story, said he was surprised at the university’s reaction two days later. Cobb told The Junction his article was correct.

“Just because you don’t agree with something someone says in the story, that doesn’t make it inaccurate,” he said.

Cobb said he asked for an interview with a board spokesperson. Instead, he said, the university sent two written statements that were difficult to decipher and ignored Cobb’s questions about posting security at the meeting doors.

The university also denied The Junction an interview. In an emailed statement, university communications said that prior permission to attend open meetings is “predominantly due to space issues within the room.” Requests to attend can be made up to 24 hours before a meeting, pending approval by the board chair.

Earlier this week, board member and Carleton biology professor Root Gorelick refused to sign the new policy. For two years Gorelick has maintained a blog chronicling the open meetings, something the board claims is inappropriate.

Posting guards at the door and effectively closing off meetings to journalists through live-streams prevents the board from being transparent, said Gorelick.

The university said in the email statement to the community on Monday that for a board member to blog about public meetings is “neither appropriate, nor legal.”

The board requires Gorelick to sign the amended statement of confidentiality, agreeing to current policy on not speaking publicly about open board meeting, sometime this month.

He said he’ll wait to see how the issue plays out in the next few weeks, and that compromises can be made.

Robinson said Gorelick, and other elected members of the board have a duty to speak to their constituents about what goes on in public meetings.

If Gorelick is made to sign the statement of confidentially without revisions made, Robinson said Carleton could face sanctions from his association, including recommendations that professors not take jobs at the school.

“It’s the kind of confidential agreement that you’d expect a spy, or the prime minister to sign. But for the board of a public body, it’s just absolutely absurd,” he said.