The day Anne Pilon found out she was HIV positive, her initial concern was not with her health, but rather she thought, “Who’s going to love me?”

Pilon was one of several speakers gathered at Ottawa City Hall to commemorate World AIDS Day, which is designated for people to unite in the fight against HIV-AIDS, commemorate those who have died and support those currently living with the illness.

According to the AIDS Committee of Ottawa, there are more than 4,000 Ottawans living with HIV-AIDS – all of which are not only fighting to find a cure, but are also in a constant battle with the enduring stigma surrounding the viral infection. That stigma keeps a large percentage of HIV positive individuals – 25 per cent – from getting tested, therefore never knowing they carry the virus.

“The stigma when it comes to HIV-AIDS is what really separates it from other chronic manageable illnesses,” said Khaled Salam, executive director of the AIDS Committee of Ottawa. He said the stigma causes HIV positive individuals to be “discriminated against in various aspects of their life, including sometimes people that are closest to them.”

Pilon credits organizations such as the AIDS Committee of Ottawa with making her feel loved, welcomed and supported. 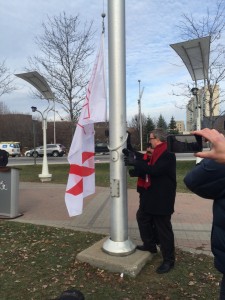 However, outside the HIV-AIDS community the stigma still persists. Jeff Potts, a consultant with the Canadian Aids Society, who has also lived with HIV for 25 years, said Canadians need to address HIV-AIDS stigma in order to make any headway in prevention. He noted the general public lacked a significant presence at the World AIDS Day flag raising ceremony that took place Tuesday morning at City Hall. “That’s a shame,” he said. “This needs to go beyond our community.”

Salam said the stigma associated with HIV-AIDS is due to its relationship with other marginalized groups, such as LGBT, African-Caribbean-Black communities, indigenous peoples, and intravenous drug users. “HIV-AIDS is a surface stigma,” he said. “It intersects with racism, homophobia, drug-phobia.” Until those underlying issues are addressed, Salam said HIV stigma is always going to exist.

Janne Charbonneau, president of Gender Mosaic, noted the issues faced by the transgender community in terms of HIV-AIDS can be traced to a lack of data. The number of transgender people living in Canada is not collected by Statistics Canada, making it extremely difficult to monitor the number of transgender people who have the illness. “You can’t manage what you don’t measure,” Charbonneau said. “And you certainly can’t help what you don’t even know exists.”

The stark message from the World Aids Day gathering was education of the general public is a necessity in preventing HIV-AIDS.

“We need to do a much better job of convincing the broader community that HIV is with us all,” Potts said. “Whether or not we are living with it, its something that we all share ownership of because it’s that pervasive in our community.”

This year, the AIDS Committee of Ottawa took part in the Red Scarf Project, an initiative that started in London, Ont. in 2012, and aims to raise awareness by distributing red scarves knitted by individuals affected by HIV-AIDS.

This error message is only visible to WordPress admins

Please go to the Instagram Feed settings page to create a feed.