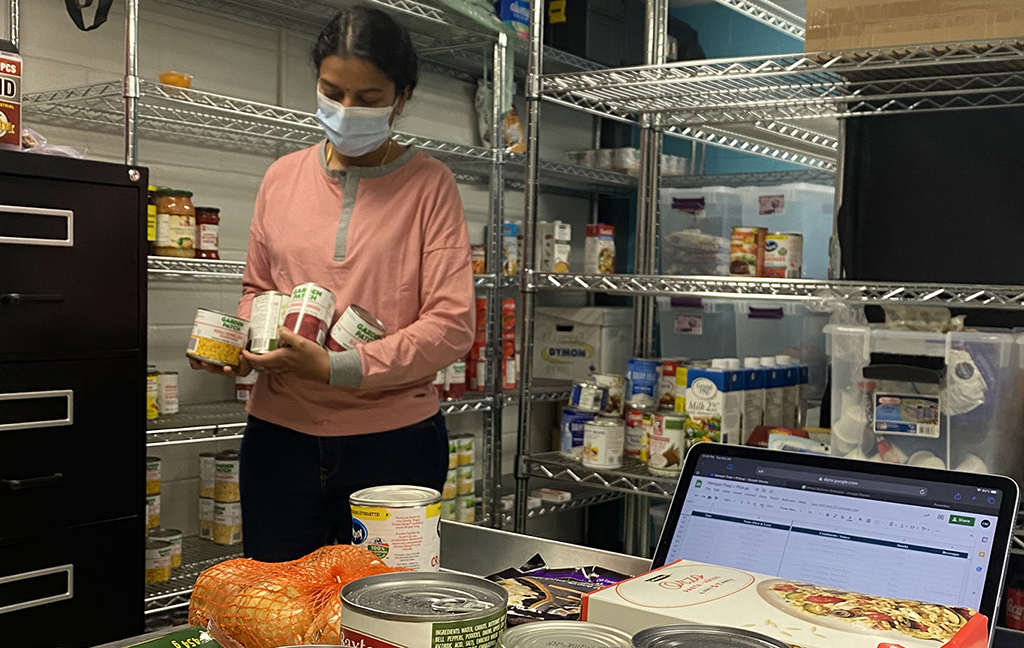 A volunteer working behind the scenes at Carleton University food bank. Photo by Neeharika Saha

On Tuesday, Asma stood at the entrance to the Parkdale Food Centre food bank on Hamilton Avenue North.

The 33-year-old first arrived in Canada from Bangladesh in 2018 with her son, who is now 12, and she works as a lunchtime supervisor at a local school, three hours per day, five days a week.

“Fifteen hours is not enough to meet our needs,” she said.

She is not earning enough to sustain both herself and her son and relies on local food banks for assistance. She declined to share her last name.

The groceries she gets from the food bank cover one week, and she has to buy food to cover three other weeks herself. She prefers to purchase long-lasting, non-perishable and frozen products.

“They are helpful,” she said. During the pandemic, Asma could call the food bank and arrange the delivery of groceries to her building. The food bank never turned her away, even at times when stocks were low.

On Tuesday she arrived to pick up groceries and was told to submit an advance request. But, after a few minutes, Inaya Siblini, the coordinator of the food bank, came out the front door, bearing a paper bag with what Asma needed.

Asma is one of Ottawa’s many hungry people. Some rely on the kindness and generosity of others to put basic food on their table and use local food banks to supplement other sources of food. Food prices are rising, as are housing costs, and the winter is expected to drive this increase even further up. In these conditions, food banks in Ottawa are a support source of last resort for an increasing number of people.

Most food bank users live in rentals and almost half worry about facing eviction or defaulting on mortgage payments, according to a 2020 report by Feed Ontario. In 2020, more than half of those who used food banks in Ontario were under the age of 30, and more than 60 per cent relied on social assistance, such as disability payments or Ontario Works.

With food prices rising, food banks are feeling the squeeze.

“Everything is getting so expensive,” said Inaya Siblini. “We do have a certain budget for every item and the increase in prices is affecting our budget.”

Siblini said her food bank saw a significant rise in demand over the last two years. Since the beginning of the pandemic, Parkdale Food Centre has been serving twice the number of clients as it had previously.

“When you have the increase in the number of people you are serving, that definitely will be hard for you,” Siblini said.

She expects the number of people who come to the food bank to continue going up. “Things are getting expensive, a lot. And there are more and more people who need food, especially when they do not have much income,” she said. “We will make sure to do our best to serve everyone who seeks our help.”

‘A paycheque away’ from needing help

“That really did help people, it really did show us that people are a paycheck away from requiring support, because without CERB, they came to us,” she said. “However, those supports from the government, they came in and they went through the course of the last 20 months. And as it is right now, demand is up a fair bit, I think.”

Many of the individuals who use food banks are single parents, Ingram added.

“One-parent families are definitely a demographic that we see having to head to food banks. Kids are expensive. There’s a lot of expenses that come along with raising a family, especially when you’re doing it on your own,” she said.

Ottawa Food Bank is not worried about its immediate future, said Ingram, who added they would be able to absorb the increased costs of food and increased demand thanks to the generosity of the community.

“The community has been there for us. We’re truly an organization supported by the community, for the community. If it weren’t for the people who donate their hard-earned dollars, we certainly would not be able to do what we do,” she said.

Ottawa’s food banks serve some of the most disadvantaged individuals in the city. They are spread around Ottawa and usually allow anyone who needs them to use their services. Map created by Dennis Kovtun.

The increase in food bank usage is an indicator of intensifying food insecurity, said Tim Li, a research coordinator with an interdisciplinary team at the University of Toronto that investigates food insecurity in Canada.

“We’re showing that only one out of four of the food insecure households are actually using food banks, and there are a lot of different reasons for this—it’s a dignity issue. In a country as rich as Canada, a lot of people don’t want to be seen as using food banks, or they may feel that it’s something that’s not for them,” Li said.

For many people, food bank usage is indicative of real misery, said Elaine Power, professor at Queen’s University, who researches food insecurity. With winter coming, Power said the cost of living is going to increase further. Clothing and heating are additional expenses, particularly for people with young children.

“I’m not sure that there’s anything special about this winter in particular, except that everyday costs are so much higher, and the essentials are more expensive,” Power said.

While neither the Parkdale Food Centre nor Ottawa Food Bank had to turn away people, Power observed a different situation in smaller communities.

“Lots of food banks turn people away all the time. They run out of food. The demand goes up. We’re going to see more and more of that,” she said.

Power said that while food banks in big cities like Ottawa or Toronto may not be very affected, this is not true for smaller communities. There, food banks have to strictly ration how much they give out, or they risk simply running out of food.

River Ward Coun. Riley Brockington said he believes Ottawa is doing reasonably well on the issue of hunger, though there is room for improvement. Rates of food insecurity are high in lower income neighbourhoods, like those in his ward.

“I think you can best judge a city by how well or not it treats its most needy people. If you have many people whose needs are not being met, then the city’s not doing a good enough job.”