Tipping culture: Where do we go from here once minimum wage increases for liquor servers? 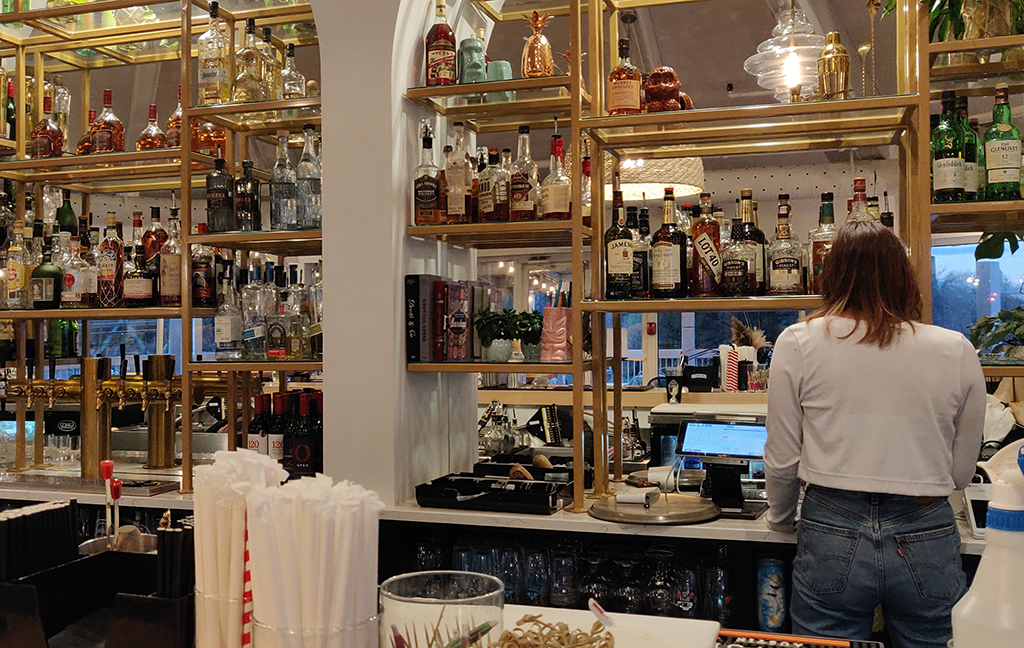 During the summer, there were days when Nicola Steeves would walk up to 40,000 steps during a shift at Umbrella Bar, the sunny Dow’s Lake patio where she works as a bartender and server. At the end of those long days, she would often soak her sore feet and keep Advil and Voltaren nearby.

“You need to buy a new pair [of shoes] like every two months because they fall apart,” the 26-year-old Ottawa woman said, adding the cost of sneakers alone is enough to appreciate the tips she receives.

But Steeves fears those hard-earned tips could soon take a hit when the province raises the minimum wage for liquor servers.

Starting Jan. 1, 2022, Ontario will join Alberta and British Columbia in raising the minimum wage for its liquor servers to match the province’s general minimum wage. Liquor servers, who currently earn $12.55 an hour, will soon be making $15 an hour. As wages and the cost of living in Ontario go up, people in the hospitality industry – everyone from consumers to experts – wonder what the future of tipping entails.

Although tipping is a voluntary act, it’s a large part of the dining culture in Canada. Consumers may choose to tip because they received great service, but they’ve also learned it has become what is expected when they’re out at a restaurant or bar.

Steeves earns around $350 to $400 in tips on a good day before pooling tips. Six per cent of every customer’s total of the bill goes into pooling tips. Not all establishments function this way, but at Umbrella Bar, the pooled money is then redistributed among the support staff whether tips are made or not.

“If people don’t tip us, [servers] end up paying six per cent out of their own pockets,” Steeves explained.

The act of pooling tips or tip outs is when employers withhold or make deductions from the servers’ tips and then redistribute them among some or all the employees at the workplace who wouldn’t otherwise benefit from tips.

On a busy evening, Benjamin McMurray could earn between $35 to $40 an hour at Taproom 260 in Orléans, where the 20-year-old worked until recently when he left to focus on his studies.

“You would only have to tip out if you sold over $200,” McMurray said.

Meanwhile, on Friday or Saturday nights, which are the busiest at the Works Craft in the Glebe, Jessica Stewart, 24, said a server and a manager on duty makes anywhere between $100 and $150 in tips per shift. Stewart pools her tips to the kitchen and the host. The host receives one per cent while the kitchen receives 1.5 per cent of the tips.

Restaurants and bars have different rules on tipping and tipping pools, but no matter the arrangement, servers rely heavily on the tips left over to make a living.

Bruce McAdams, an associate professor at the University of Guelph who researched tipping culture and is a strong support of the abolition of tips, argues the increase in the liquor server minimum wage will have a big impact on restaurants, forcing them to increase their pricing.

“Server hours make up over 50 per cent of the hours of labour in a restaurant,” McAdams said.

There’s the additional concern that consumers will frequent restaurants less because of the price increase, which will in turn reduce servers’ shifts. “They’ll actually make less money,” he added.

Many servers on social media and in restaurants are not happy with the idea of scrapping tips simply because their minimum wage is increasing. Servers in Ontario make an average of $30 an hour, according to McAdams, which is twice as much as the proposed minimum wage, resulting in the possibility of them earning less if tipping disappeared.

“Minimum wage would have to jump up a lot so that someone would be able to support themselves, especially in Ottawa with the high cost of living,” McMurray said. The liquor server minimum wage and its increase on Jan. 1 will not reflect the inflation rates. The annual rate of inflation reached its highest level since 2013 in October 2021, according to Statistics Canada.

The difference between paying the rent or not

The act of tipping helps servers support themselves. “It’s the difference between being able to pay rent or not – or being able to treat yourself to something you usually wouldn’t,” Steeves said.

Steeves took her sister out to a nice dinner after receiving a generous tip. A man and his two friends were dining at her restaurant.

“He tipped 150 per cent and I had to go to the kitchen because it was so unexpected,” Steeves said. Since her tips were pooled, the kitchen staff would have benefited from that 150 per cent tip as well.

In Stewart’s case, cash tips are key because tips included in electronic payments can take weeks to materialize. “I have a regular come in and he tips really well. He always tips cash too,” Stewart said.

Almost all the money McMurray was making was going towards tuition. “A birthday group of 10 people ran up a $400 tab and they ended up leaving an $80 tip, which was the most I’ve ever made,” McMurray said. “It was nice to be able to see that the hard work I’m putting in would result in a good pay for school.”

But McMurray said he is aware some consumers believe the service should be included in the price when they pay for their meals.

“I can understand where tipping is an issue for some people because they feel like they’ve paid for the product,” he said.

If tipping as we know it were to stop, McMurray said he believes it would discourage a lot of servers from continuing in the job.

“You would not keep quality people in the industry because we don’t do what we do for minimum wage.”

Although the tips can be great at times, a lot of servers are in the business because they enjoy serving and providing an experience to their customers. “Serving is a love language for me,” Steeves said.

A lot of the people she served over the summer were getting together for the first time since the beginning of the pandemic, so Steeves said she tried to ensure they had a good experience at her restaurant.

The downsides of tipping culture

McAdams argues tipping should not be a part of restaurants and bars. Through his research, McAdams found there is some animosity between servers and cooks.

“If you’re a cook making $15 an hour and you know servers make tips and now you hear they’re making the same amount as you plus their tips, you may feel disenfranchised about the work you’re doing,” he said. Although a lot of places pool tips, servers are the ones benefitting the most.

One of the main reasons for McAdams’ strong belief in tipping abolition is the sexualization of servers. “You walk into an upper casual restaurant and unfortunately, women are wearing heels, makeup and their hair is done up because they’re asked or they know they will make more tips because of it,” McAdams said.

Steeves has not experienced being sexualized herself, but she agrees it is common in certain types of bars. “It’s an industry where you’re expected to look a certain way,” she said. “No one wants to eat somewhere where your server looks like they don’t bathe.”

To further his point, McAdams recalls a first-year undergraduate student came to him after a class on tipping and shared with him that at her campus bar – where she doesn’t wear makeup and her hair is always up – her female trainer told her that she would make more tips if she put on makeup, wore her hair down, and undid a few buttons.

“This is an 18-year-old woman. That’s why we should stop tipping,” McAdams said.

Research on tipping has evolved since McAdams’ work was published in 2017.

Researchers at Dalhousie University published a study in June that found more people are questioning the idea of tipping. The online survey of Canadians gathered attitudes and perceptions towards tipping during the pandemic, and found 48 per cent of the participants felt pressure to give a good tip more so than before the pandemic.

Back at Umbrella Bar, Steeves was taking a break during a recent shift. She said she fears the upcoming changes to Ontario’s minimum wage could create an exodus of servers out of the industry.

“If it turns out that people stop tipping and servers are just making minimum wage, I don’t think a lot of people are going to stick around.”