Students call on Carleton U to divest from fossil fuels 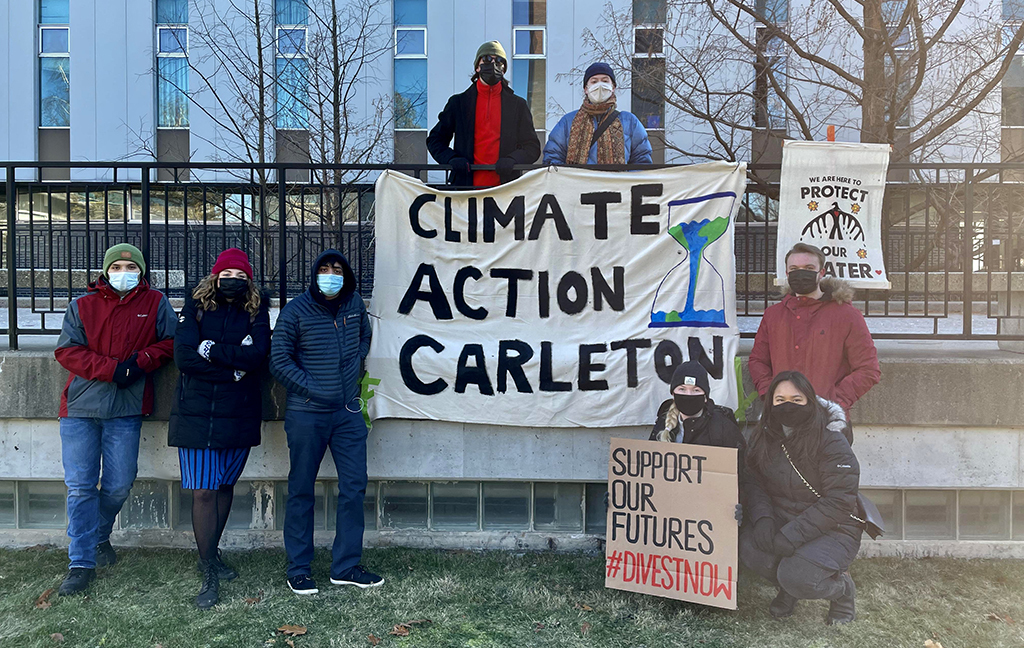 Students, faculty and community members converged on the Carleton University campus Friday to urge the school’s administration to divest from fossil fuels.

Climate Action Carleton, a student-led sustainability organization, organized the afternoon rally to raise attention to its #DivestNow campaign, which the school’s board of governors was expected to discuss at its 3 p.m. meeting.

Steph Vienneau, a third-year environmental studies student who helped organize Friday’s event – which drew about 50 people, said it provided an opportunity to demonstrate the importance of divestment to the Carleton community.

“Divestment is a topic at the board of governor meeting today,” Vienneau said. “They will be discussing whether it is practical for Carleton and whether they want to pursue it. Our goal today is to show just how much support we have.”

The #DivestNow campaign calls on Carleton University and the University of Ottawa to divest the university’s endowment funds from the fossil fuel industry. It also demands that both universities disclose all financial holdings of their investment portfolios and reinvest the divested funds into sustainable alternatives.

Vienneau explained the #DivestNow campaign represents a way for Carleton to become a leader in the divestment conversation.

“I think the #DivestNow campaign matters a lot because an academic institution like Carleton has a lot of agency in what they do,” Vienneau said. “Making a statement like divesting from fossil fuels, like so many other universities have, sends a strong message to the government, to investors and to industries that fossil fuels are no longer tolerable.”

Student-led divestment initiatives have taken root at post-secondary institutions across Canada and around the world to encourage university and college administrations to sell stocks, bonds and other funds that are invested in the fossil fuel industry.

Additionally, the Canadian Association of University Teachers (CAUT) expressed its support of post-secondary institutions divesting from fossil fuels in an article published in October.

Climate Action Carleton is one of many student groups within the broader Divest Canada Coalition. Made up of 30 groups from institutions across Canada, the coalition works to get post-secondary administrations to recognize the threat of climate change and address that threat by divesting fully from the fossil fuel industry and investing in sustainable alternatives.

Angela Dittrich, a 22-year-old York University graduate student who is jointly studying law and environmental studies, is an active member of Fossil Free, a divestment group at York University.

Dittrich said working collaboratively with other divestment groups within the Divest Canada Coalition has been a rewarding experience.

“It’s been really powerful to be able to talk to other divestment campaigns and learn from them,” Dittrich said. “We get to talk to the groups that have secured divestment, see what worked for them and what didn’t and just talk about the struggles and the victories together.”

Mary Stuart, a 22-year-old environmental studies major at the University of Ottawa and member of Climate Justice uOttawa, said she believes young people have a huge role to play in holding institutions accountable.

“Young people have a huge stake in seeing real climate action be taken seriously because we’re worried about our future,” Stuart said. “Young people really want a better future in terms of achieving climate justice. Not only are they fighting the climate crisis but they’re re-imagining a society that supports the well-being of people in general.”

Stuart added the climate crisis presents an opportunity to critically examine the root causes of the issue, including colonialism and capitalism.

“There’s a real drive to reimagine the way that we live and the relationships we have with each other and the planet,” Stuart said.