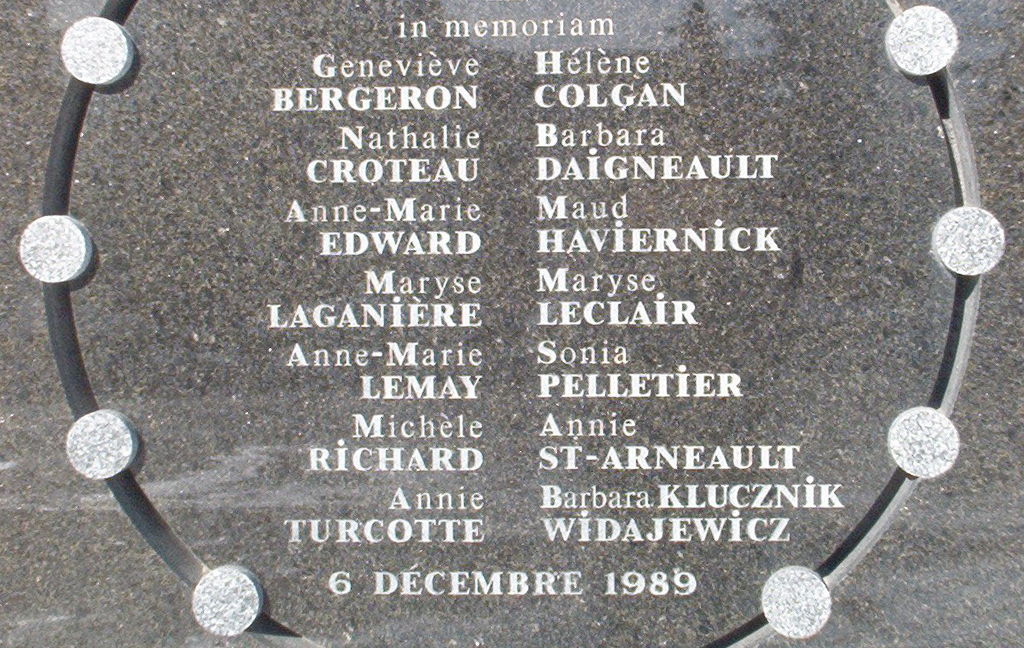 Plaque commemorating the lives of the 14 women killed at École Polytechnique during the 1989 Montreal Massacre found outside the university. Photo by: Wikimedia Commons

Patrizia Gentile was a 19-year-old student at Montreal’s McGill University in 1989 when a shooter opened fire into a class of engineering students at École Polytechnique, targeting and killing 14 women. The experience solidified her as a feminist and academic against gender-based violence.

Today, as an associate professor who specializes in human rights, social justice, and women and gender studies at Carleton University, she continues to commemorate the 14 female students whose lives were cut short more than 30 years ago on Dec. 6, an event since known as the Montreal Massacre.

For Gentile, the anniversary is a day of remembrance. Over the years, she’s attended events in Montreal and Ottawa, from visiting the women’s monument at Minto Park to saying the names of the 14 women who were murdered. Through it all, she could not shake the feeling the tragedy left behind.

“It was like a tattoo … on our memory,” Gentile said. “It galvanized my own personal journey around my sexuality and being a feminist and made me more of a feminist.”

This year’s vigil will be broadcast virtually on the Women’s Event Network Facebook page at 6 p.m. Monday.

“My generation really did see this as a political moment, so I think for us Dec. 6 is not just ‘Let’s take a moment and think about violence,’” she said. “It is specifically about how this horrific massacre happened because people were identified as women.”

What strikes Gentile every year is the large number of women from younger generations who attend the memorials. She explained she is overcome with sadness when she sees the crowds because it solidifies that gender-based violence is still present in people’s everyday lives.

This year’s memorial comes weeks after a report from Ontario’s Association of Interval and Transition Houses highlighted that 58 women in the province were victims of femicide over the past year.

‘These women could have been me and my friends’

For 23-year-old Laura Stoyko, a software developer and University of Manitoba computer engineering graduate, the events that unfolded long before she was born still impact her life.

“To think that those women could have been me and my friends,” she said.

In 2019, Stoyko ran the University of Manitoba’s 30th anniversary memorial.

“It was just heartbreaking to think these women, all they wanted was to study, to be an engineer and to help the world,” she said. “Someone decided they weren’t going to be able to do that anymore.”

Stoyko said she still sees few women in the room at her work. Efforts to bring more women into science, technology, engineering and mathematics fields must start at a young age and must address how children are socialized differently, she explained. As girls drop out of those fields, it closes the door on future studies and careers.

“A big part of it is outreach and showing what engineering actually is,” Stoyko said. “Once you’re in first-year engineering, women are more likely to stay until the end, so it’s not a problem of keeping them, it’s the problem of how we actually get them there.”

Referring to the impact gender-based violence has on Canadian women today, Gentile said not much has changed since the 1989 massacre. According to Statistics Canada, more than four in 10 women have experienced some form of psychological, physical or sexual violence at the hands of a partner in their lifetime.

Gentile said 32 years of history shows the legal and political systems alone are not doing enough to solve gender-based violence. Canadians need to integrate the issue into daily conversations, she said, not just once a year.

“The impact is still seismic [and] violence is politicized,” Gentile said. “The impact has done nothing on the everyday […] epidemic of violence against women, femmes, trans women, non-conforming people is relentless.

“It has not changed.”