A car accident in 1988 changed the course of Sandra Inglis’ life as a member of the
Canadian national synchronized swimming team, but it also allowed her to step into the role of coach. After many years of working on her career and supporting her family, Sandra is back at the pool leading the Carleton University Synchro team and continuing to be involved in a sport that she remembers as a defining passion in her life. 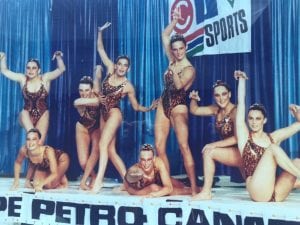 Sandra competed for the Olympium Synchronized Swimming Club in Toronto when she was in high school. Her ‘Cats’ themed routine, pictured here, scored a perfect 10 and was one of the first synchro routines to feature an acrobatic movement called a “throw” – Sandra’s teammates launched her into the air to gasps and exclamations from the crowd and the commentators. 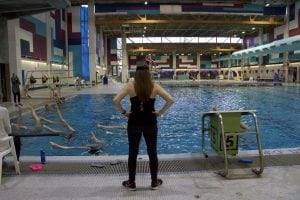 Sandra now coaches with an Ottawa club, Go Capital Synchro, and leads the Carleton Ravens synchro team. She got back into coaching in 2014 when the president of the Ravens team persuaded her to help organize the group.

Special thanks to Sandra Inglis and the Carleton University Ravens Synchronized Swimming team.