Ashley Courchene is an Ojibway man who is passionate about storytelling. For this
Indigenous rights activist, the spoken word has become a creative outlet for him to express not only his feelings about the position of Indigenous peoples in Canada, but also his vision for the future. This summer, Courchene was part of the #reoccupation movement on Parliament Hill, an experience he says changed his life. Now in his new podcast, The Skoden Chronicles, Courchene is taking the oral storytelling tradition to the air waves. 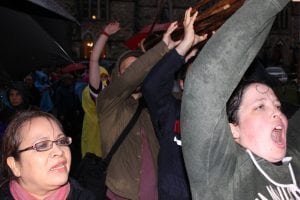 Courchene and his fellow demonstrators clashed with police in the rain before they were successful in erecting their teepee on Parliament Hill. 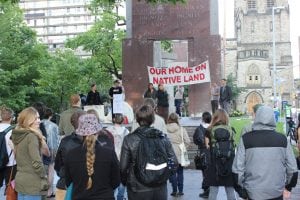 The participants of the re-occupation movement assembled at the Human Rights Monument on Elgin Street in downtown Ottawa before marching to Parliament Hill.

Special thanks to Ashley Courchene, CKCU FM 93.1, and Skoden Chronicles.