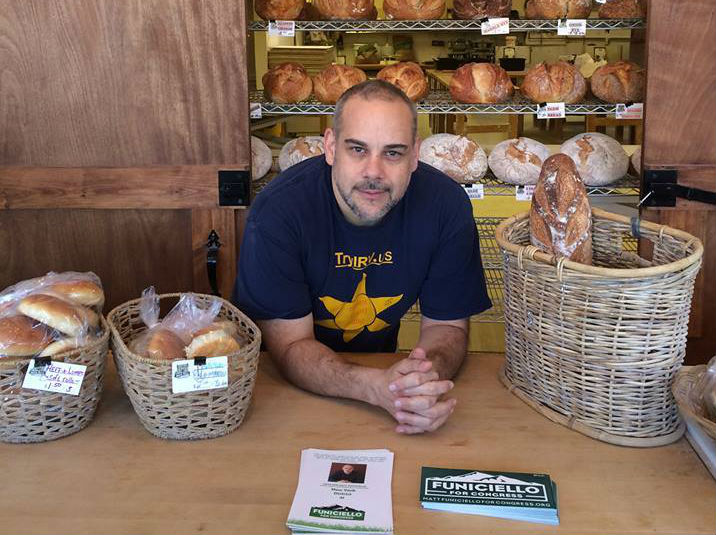 The candidate for New York’s 21st congressional district has been a baker for 30 years and put in a few hours at his Glens Falls business before slipping off to vote himself. He then returned to continue with work.

“I may be the only candidate in the county or even the country working at my job on election day,’’ Funiciello said.

That’s somehow fitting for a man who calls himself the “working class candidate.”

Funiciello is the only other party candidate running against Republican incumbent Elise Stefanik and Democrat hopeful Mike Derrick. Funiciello said both his opponents are “tourists” as “neither candidate really had ever lived here in their lives.” Funiciello was born and raised in Glens Falls, and spent most of his adult life in the district.

The 49-year-old first ran for Congress during the 2014 midterms. Despite losing to Stefanik, who became the youngest woman elected to Congress at 30, Funiciello garnered 11 per cent of the entire vote, which he considered a Green Party success.

Funiciello said climate change is probably the most important issue, “next to war and peace.” He said the response from the major parties to climate change has been insufficient.

And he’s adamant that his candidacy will not result in vote splitting. “A vote for any party other than a third party candidate in a safe state in the United States, given the proximity of the two major corporate…parties, is almost indefensible.”

Funiciello, who went to high school in Ottawa, does have a small beef with his northern neighbours. “I do fault the Canadian system for planting a lot of progressive seeds in my mind,” he says, “single payer health care and peace being two of them.”

When asked about the presidential race between Donald Trump and Hillary Clinton, Funiciello says that given a choice, he’d take Trump.

Funiciello will be watching the election results from his Rock Hill Bakery in Glens Falls. He said by this evening he’ll be ready for a good glass of wine, or two.