By Shalu Mehta and Rachel Levy-McLaughlin

OGDENSBURG, N.Y. — Some high-school students are voting in this year’s election as part of their schoolwork — and what they consider to be their civic duty.

At Ogdensburg Free Academy, about 80 senior students participated in registration drives to get residents to sign up to vote. They also studied both parties and signed up for one of them, all as part of one teacher’s push to combat student apathy in an often-nasty campaign.

“What they see of really nasty politics doesn’t help them,” says George Snyder, who teaches economics and government to Grade 12 students. “Whatever you can do to try to get kids to go and vote and take responsibility is a good thing.” 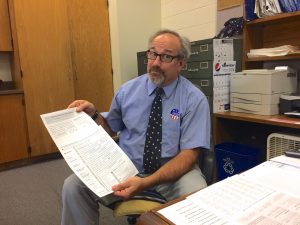 Snyder, who has taught at the high school for 30 years, gives extra grades for the students to cover the presidential and vice-presidential debates. Some of the older students can receive extra credit if they go out and vote.

Grade 12 student Matthew Robinson says the course has made him more engaged in politics.
“I usually just look at the stuff people are posting online, for example on Twitter,” says Robinson, who planned to vote with his grandparents after school.

Snyder says he encourages students to discuss the election and politics at home, as well, to help them form their own opinions. He says high-school students normally absorb much of their parents’ political views, he says. At this age, “you get it from your parents.”

James Gibson, another senior student, says his parents have always been very involved in politics and the news. That, in turn, has made him very engaged in his first election.

“My family’s big into politics, so I’ve always been around it,” says Gibson. He said that he has been more involved in this year’s election than in previous years.

Not all students take after their parents’ political involvement, however. Student Dedan Graveline, is very involved in the news, though his parents are not.

“I usually tune into CNN every morning before school and see what’s new,” says Graveline. “My parents don’t really like politics but I do. I think it’s important to keep up-to-date on U.S. affairs and to just stay informed.”

Student Anthoni Pope echoes the sentiment, saying he thinks voting should be a priority.

“Since we’re all old enough to vote this year, we have to be involved in this election,” says Pope. “It should be a responsibility to vote, but at the same time, people have their own rights to not vote. That’s part of being American.”