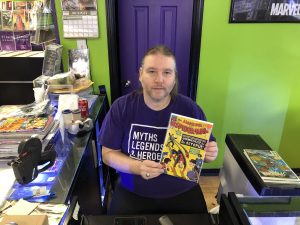 Rob Zedic, the owner of Myths, Legends & Heroes, shows off his copy of Amazing Spider-Man #12. The character was co-created by the late Stan Lee and starred in comics, cartoons and blockbuster films.

In the wake of Stan Lee’s death on Monday, Ottawa’s Comiccon community is reflecting on the Marvel Comics creator’s impact on the genre as they gather at the EY Centre this weekend for a holiday edition of the convention.

“When people think superheroes a lot of times they think about Stan Lee,” said Janet Hetherington, an Ottawa comic book writer and artist.

“They think about him being the face and the voice of comics,” said Hetherington, who will attend Comiccon: The Holiday Edition. “He’s left a lot of joy behind.”

The free event will host local comic book artists and dealers, selling their merchandise to fans in time for the holidays.

In addition to Hetherington, other comic book artists and writers attending the event include Ronn Sutton and Geof Isherwood.

Sutton describes how Lee played a major role in revitalizing the popularity of comic books a mere decade after public disdain for the industry in the 1950’s.

Lee, along with other comic book artists, like Jack Kirby and Steve Ditko, renewed the popularity of superhero comics and got the industry back on track in the late 1960’s, which Sutton describes as “the height of the Marvel age of comics.”

“The main thing he had brought to comics was he had sort of a new vision of what superheroes were supposed to be,” said Sutton. “They were actual people with money problems, and girlfriend problems, and what have you.”

Since the first Ottawa Comiccon in 2012, Richard Wong has attended as a cosplayer, wearing his own costume creations representing characters in the comic book universe.

Wong praises Lee as having given “a voice to people who felt ostracized from society.” He explained that Lee cared deeply about his fans and would go out of his way to see them. 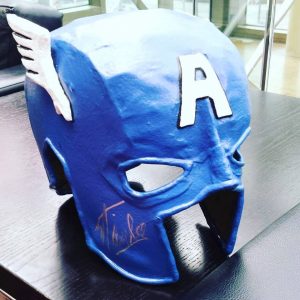 Wong’s Captain America helmet, part of the costume he wears to conventions. It has major sentimental value to him: it was signed by the late Stan Lee.

Wong is a member of the fan group The League of Superheroes, which is expected to attend this weekend’s holiday Comiccon along with the Capital Citizen Garrison of the 501st Legion, a group of Star Wars fans who dress up as Stormtroopers for conventions and charities. The groups will be working together to raise money for the Children’s Hospital of Eastern Ontario.

“There will probably be more comic vendors at that event than at the Comiccon event because the booths are cheaper. It allows some smaller vendors to do that show that they can’t afford to do at the Comiccon show,” said Zedic.

There is no word from event organizers on whether there will be any special events or tributes to honor Lee. However, both Hetherington and Sutton said they will be honoring Lee’s contributions to the industry informally by talking to fans over their mutual admiration and appreciation of all that he did.