An unintended intrusion: Not enough space for drag culture

lirting as a drag queen “makes a lot of straight men very, very insecure,” said Sky Gilbert, a professor at Guelph University and an award-winning author and playwright. “And I do it for fun because it’s fun to watch them squirm.” 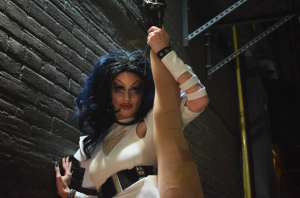 Gilbert has been performing as a drag queen since the 1980s and has seen the scene change since the early days, when gay culture was about being flamboyant, visible and loud in public places. Drag performances traditionally involve homosexual men dressing as women and lip syncing on stage as their female personas. This includes drag kings who are lesbian women who portray male personas.

The culture has become much more inclusive, drawing people who identify as straight, referred to as faux kings and queens, as well as trans-gender and non-binary people to the stage to perform. At the same time, drag has gone more mainstream, drawing audiences that include heterosexual bachelorette parties and fans of the popular reality TV show RuPaul’s Drag Race.

“If you look at the history of drag, as soon as guys put on dresses and sing and dance, straight people want to come and see it,” Gilbert said.

Some in the community see it as an intrusion. While they acknowledge a lot of patrons are respectful, others are not.

Max Winsor, a trans-man who performs with the drag king troupe, Canada’s Capital Kings, does his weekly drag performance at Swizzles, a gay bar in downtown Ottawa. When Winsor first started going to Swizzles ten years ago, he remembers the crowd being thin. Today, a typical karaoke night is so packed he can’t even sing two songs in four hours. 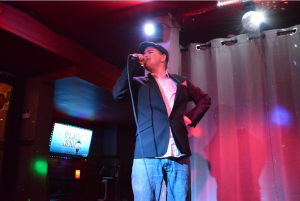 “It is mostly straight people filling that up,” he said, estimating they likely make up 70 percent of the crowd on a given night. “It feels like progress but it also does feel like loss.”

The loss of space also comes with a loss of personal space. Winsor reports being touched inappropriately at least once a show.

He describes an encounter he had with an audience member while waiting to begin his second performance.

“This guy was shoving me in the back with his forearm, this older straight man,” Winsor recalls. By the fifth time Winsor was shoved, he knew the aggression was deliberate. “I was like ‘Can I help you? Do you need something?’” which was followed by abrasive remarks made right over Winsor’s shoulder.

Fans enthusiasm is mixed with voyeuristic excitement. According to both Winsor and Gilbert, these incidents primarily come from groups of straight women, mainly those attending particularly . Even more specifically, from bachelorettes.

“Oh god, please save us from the bachelorette parties,” Gilbert groaned.

According to Gilbert, the women attending drag shows for bachelorette parties are typically middle-class and have a sense of entitlement. Gilbert said their behaviour is often inappropriate, ranging from unwanted touching to jumping up on stage uninvited during performances.

Gilbert and Winsor both report being touched inappropriately while performing. “I’ve been molested a couple times by women,” Gilbert said. “They think they have a right to touch you, it’s all crazy.” Winsor said that at least once a show, someone touches him without his consent. This has included pinching and slapping his backside during and after his performances.

This is a relatively new issue, Gilbert notes. According to a 2018 study conducted by the Association for Psychological Science, a non-for profit psychological research organization, straight women tend to have more open and friendly relationships with gay men than with straight men. An increase in these friendships has Gilbert remarking that more and more young middle-class gay men bring straight women with them to gay bars.

Gilbert explained that straight women wanting to hug and touch performers feels like ownership. “It’s a real entitlement thing,” he said.“They’re voyeurs, and they’re tourists, in our place, and we don’t have many places, and they have a tendency to take over and dominate the situation,” he said.

“It’s like ‘What’s the weirdest thing we can go out and see tonight, so let’s go to the drag bar.’”

David Dorey, another performer with Canada’s Capital Kings who identifies as non-binary, is quick to assert that they think the misbehaviour has less to do with malice and more to do with ignorance.

But they also admitted that “the bachelorette parties — it’s almost like the side-show,” they said. “It’s like ‘What’s the weirdest thing we can go out and see tonight, so let’s go to the drag bar.’”

Dorey credits “a certain Ru Paul” for turning the gay bar into a wild form of entertainment for straight women.

RuPaul’s Drag Race is an American reality television show where drag queens compete to win the title of “America’s Next Drag Superstar.” Now 10 seasons in, the show now airs on Netflix, and the host, RuPaul Andre Charles, a drag queen and television personality, has won three Emmy awards for the show.

“How does anyone learn anything these days? It’s through popular media, which is ridiculous,” Winsor commented. “Especially with RuPaul being on Netflix, and it being so accessible now, I don’t want to say it’s a trend, but I feel like drag is trending.” Still, Winsor remains hopeful that the show could still promote openness among a heterosexual audience.

A loss of space

Gilbert is adamant that the problem is not that straight people aren’t welcome. The problem is a loss of space for a community that is still fragile.

This is a balancing act that Winsor is familiar with. “I wouldn’t want to be made to feel that way if I went to a straight bar with all my queer friends,” Winsor said, noting that this does happen to him a lot. “I would never want to make someone feel that way. I want everyone to be welcome everywhere.”

“It’s not on us queer folk to educate everyone, but we try to do it anyway,” he said.