A celebrated American drag performer who revealed his HIV-positive status when he was a contestant on RuPaul’s Drag Race Show has brought his message of safe sex and drugs to Ottawa. 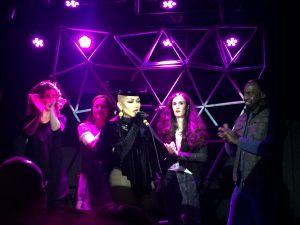 Ongina performing at Ottawa’s The 27 Club on Thursday evening.

“Being a drag queen gives us a louder voice because when we’re on stage, all eyes are on us,” Ryan Palao said in an interview before hitting the stage Thursday night at a ByWard Market nightclub to belt out a traditional drag queen lip sync of Lady Gaga’s “Born this way”.

Palao, whose stage name is Ongina, has been involved in HIV awareness since placing fifth on the reality TV show in 2009.

“It’s important to use that voice and spread the message of practicing safe sex and safe partying,” said the performer, who headlined the AIDS-awareness event at The Club 27. “I try to do what I can to help bring awareness and help with the stigma associated with the virus.”

Ottawa’s gay, bisexual and queer male community is spreading awareness through the colourful world of drag for Canadian HIV and AIDS awareness week. 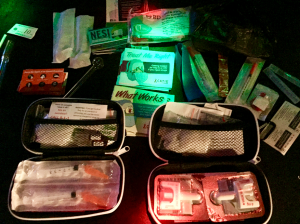 Harm Reduction Kits given out at The 27 Club.

MAX Ottawa, Viiv Healthcare and Capital Pride organized the event, which brought community members together to discuss the safe use of drugs for sex and partying. MAX Ottawa offers a number of resources for men, including information on where to get an anonymous HIV test and “harm reduction kits,” which contain items ranging from condoms and lube to clean drug paraphernalia.

“The goal of the program is to approach harm reduction in a fun, positive manner,” said Robert Alsberry, the communications and outreach coordinator of the community organization. The main focus of the event is “chemsex,” which is “the use of drugs specifically to enjoy sex,” he said.

“However, the issue with this community is that it greatly increases the chance of acquiring HIV or STIs,” said Alsberry.

Palao entertained with some stand-up comedy and emphasized that having a platform to spread awareness for HIV and AIDS in Ottawa has been a great opportunity.

“The fact that she, on national TV, came out as HIV-positive to try to help with the stigma of that, I think is a really big deal,” said Andrew Parker, an attendee who paid extra for a meet and greet with Ongina.

Palao encourages others who are HIV positive to continue living their lives and pursuing their dreams. “Remember that there are people like you who may be going through the same things and it’s important to know that you can reach out.”