Indigenous representatives announce progress on plan to keep families together

Indigenous Services Minister Jane Philpott, declared a “humanitarian crisis” in Indigenous child and family services today in the House of Commons, as she announced pending legislation to give more control to First Nations. 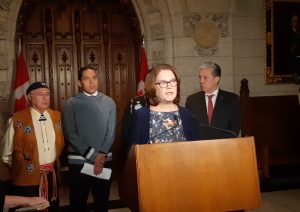 “No one should walk into a hospital room and take a baby away” on the basis of what she called “neglect.” She was joined by First Nations, Inuit and Metis leaders, as she announced a six-point plan for overhauling Canada’s approach to these issues. The plan, from January 2018, provided expanded funding to better support the well-being of First Nations children and their families. The government of Canada also committed to fully implementing the Human Rights Tribunal in order to protect Indigenous communities.

Currently, Indigenous children make up eight per cent of the child population in Canada but 52 per cent of children in foster care. Philpott described Canada’s historical interference in Indigenous families, from residential schools to the Sixties Scoop to the current practice of taking Indigenous children from their families on shaky concerns of child welfare. Culturally appropriate strategies, such as consulting the Métis National Council, Pauktuutit (Inuit Women of Canada) and other Indigenous bodies when making policy, will help preserve the lineages of the First Nations, Inuit, and Métis, Philpott explained. 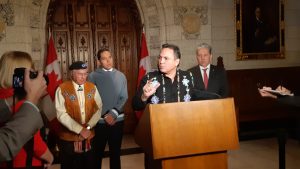 The leaders of the Indigenous communities welcomed the announcement while keeping a critical focus on Canada’s historic treatment of their culture, communities and people.

Perry Bellegarde, national chief of the Assembly of First Nations, singled out the trilateral nature of the legislation as particularly hopeful. “Canada was founded on the myth of two founding nations, French and English. You have over 65 different First Nations here,” Bellegarde said. “It’s going to encourage provincial and territorial governments to work with First Nations and to respect jurisdictions.”

Métis National Council President Clement Chartier highlighted the neglect his community has seen from the federal government, noting the exclusion of Métis from the official apology for residential schools, the Truth and Reconciliation Commission’s mandate and the Sixties Scoop settlement. “Are we a third-class Indigenous People?” Chartier asked.

“This legislation is another step forward for us. When we get this, we will have a solid basis from which to work,” Chartier added.

Inuit Tapiriit President Natan Obed said the planned reforms reflected a fundamental change in the direction of Canada. “The pride that we have as Canadians, what we hold up in the moral fabric of our society is directly opposed to what has happened to Indigenous children,” he said. “This is ending. This is now going to be replaced by specific legislation.”

Sylvia Maracle of the Ontario Federation of Indigenous Friendship Centres, a network of local Indigenous groups, says she “looks forward to working with federal government.”

She added that she “hopes this legislation will lead to positive outcomes and increased wellbeing in the lives of urban Indigenous children.”