Home » featured » Where is Mom going to live?

Where is Mom going to live?

The question on many seniors’ minds at a City Hall gathering Friday was where they will live in five, 10 or 15 years.

Conversations buzzed about this topic as more than 150 seniors filled tables at a forum on housing solutions for middle-income seniors. 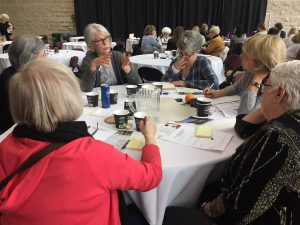 A group of seniors work together to discuss affordable housing options for mid-income residents.

“I’m probably looking to create my own situation,” said Eileen Cook, a senior who currently lives in a large house but knows that eventually she will have to move.

“There’s a whole bunch of us, the boomers,” said Peggy Edwards, who works with the Council on Aging of Ottawa. “Nobody wants to go to long term care. You want to stay independent, and that’s what we’re looking for, some better options.”

Edwards noted there is low-income housing, “but there’s really no new supportive programs for moderate income, we’re kind of on our own.”

As the needs, financial situations and physical abilities change for seniors, many of them will want or need to move from their home, but there is concern regarding the number of available units that are appropriate, accessible and affordable for the aging population.

As the baby boomers age, the percentage of seniors living in Ottawa is increasing. The age 65-plus group now represents approximately 16 per cent of Ottawa’s population.

Developers are taking note of this increase in potential tenants and are building residential communities aimed at the senior market, but Tanya Martel notes that the costs of buying or renting these units is high. 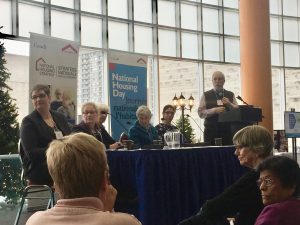 The first of three panels discussed housing options at the “My Place to Age” forum.

Martel is the property manager of Ellwood House, an independent, non-profit seniors’ development in Alta Vista with about 30 residential units. Ellwood House is subsidized through St. Thomas the Apostle Church, and Martel said the waiting list for these affordable seniors’ units is 217 years.

“We need to push the government to get off their butts,” Martel said, “because all the MPs, they’re all going to be there eventually.”

“We finally have a national housing strategy and there are opportunities in there for builders and we’d like to see them build some innovative housing,” explained Edwards. The federal government and the Canadian Mortgage and Housing Corporation (CMHC) has a 10-year, $40- billion plan that aims to create more affordable housing and promote livable communities that are close to amenities and public transportation.

“It’s our goal to make sure our communities are socially inclusive,” said Vivian Chih of CMHC. Chih explained to the forum that the national housing strategy has the goal “to create 7,000 new units of senior affordable housing…over the next ten years.”

Martel points out that Ottawa and Victoria have a greater population of seniors than other cities in the country and asked Chih, “Does that mean that Ottawa can qualify for, let’s say 80 per cent of that number?”

Chih explained that it will be a competition across the country for affordable, accessible and energy-efficient designs and CMHC will work with the City of Ottawa moving forward.