Franco-Ontarians gather to send a message 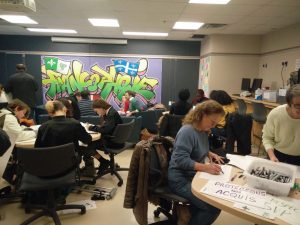 More than 35 francophones including children, adolescents and seniors gathered at the University of Ottawa to pour out their frustration on canvass against the provincial Progressive Conservative government. L’Association des communautés francophones d’Ottawa along with Front de preservation de l’identite franco-ontarienne organized a poster-making event as a precursor to the upcoming province-wide protest to be organized on Dec 1, 2018.

The experiences of the Regulation 17 and the decisions to shut down Montfort hospitals in the 1990s are still fresh in the minds of the Franco-Ontarian community, said Aja Besler, executive director of L’Association des communautés francophones d’Ottawa. The French community of Ottawa, which is the largest in the province, has united to fight back to preserve the rights threatened by the Ontario conservative government’s decision to cut French language services in the province.

The Franco-Ontarian community has called for a province-wide protest against the decision of the Ford government on Dec 1, 2018. “When it comes to our rights and institutions, we must not take anything for granted,” said Carol Jolin, president of AFO. Demonstrations are to be held at 40 different locations across the province. The Assemblée de la francophonie de l’Ontario stated at a press conference held yesterday that they had collected 32,000 dollars in financial support and 12,000 signed petitions to reinstate the French language services commissioner and French university in Toronto.

Jolin has asked Premier Ford to turn back the clock and to make Ontario a partner and leader for francophone affairs. “Like most Ontarians we prefer open dialogue over legal battles,” he said. AFO has gathered over 70 lawyers to consider legal options, but would prefer to refrain from dragging the matter before courts, said Jolin.

This decision of Ford has been receiving backlash from political leaders including Prime Minister Justin Trudeau, Quebec Premier François Legault and members of the opposition parties. The federal Conservative Leader Andrew Scheer also expressed concern over the Ford government’s move.

Jolin who met Scheer to discuss the issue stated that he hopes that Scheer is “more than worried” after the meeting. Though Ford emphasized that the decision was made strictly on economic grounds, many of the more than 600,000 Franco-Ontarians see it as an attack on their rights, identity and culture.

“We are afraid there is more coming” Jolin said. “Today it is Ontario, tomorrow it may be New Brunswick and day after Manitoba. The cuts are an attack on the francophone community which creates a concern for the wider French community in Canada if this goes unanswered.”

Franco-Ontarians by the numbers
Infogram