Some smaller ethnic media outlets are wondering whether they will they get a share of the federal government’s recently announced media funding plan. They say they need to see the details. 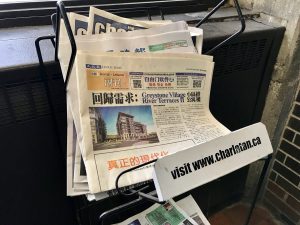 Ethnic newspapers on the campus of Carleton University

“I’m hopeful that we will (benefit), but we don’t know yet,” said Michael Regenstreif, editor of the Ottawa Jewish Bulletin, when asked if he thinks the publication will be eligible to meet the criteria for funding. He will likely have to wait until the government’s full budget in the Spring.

An independent panel of members of the news industry appointed by the government will decide which outlets meet the criteria for the government’s $600 million, five-year funding plan.

Both profit and non-profit news organizations around the country will be able to benefit from things like refundable tax credits for labour costs. Canadians who hold subscriptions will also be allowed a 15 per cent tax credit on their payments.

Non-profit publications who release free content, however, have even more benefit, being able to issue tax receipts to donors in efforts to incentivize funding.

“We’ve talked about changing the status of how we’re set up corporately in view of what may be coming,” he continued, explaining that The Ottawa Jewish Bulletin, though technically a for-profit organization, has been talking about changing its status in an effort to take advantage of benefits.

Rita Antonelli, a representative for the Ottawa’s Italian language newspaper, L’Ora di Ottawa, wasn’t aware of the plan, but stressed that it too, could use the help.

“Honestly, without the grants, we’d close up. We wouldn’t survive,” Antonelli said. L’Ora di Ottawa gets grants from the federal department of Canada Heritage, but Antonelli said it’s still not enough to deliver to print Canadian-Italian news to Ottawa and to their 2,000 subscribers across the country.

The worry is, she said, that Canada’s legacy news outlets will get most of the government’s funding.

George Abraham, founder and publisher of New Canadian Media, a publication centering on topics like immigration and culture said the same, stressing the importance of smaller publications in diversifying the media.

“My worry is that the bulk of these funds will be garnered by legacy media that is largely headed towards irrelevance,” he continued. He said the “big guns” of the journalism industry who have been lobbying for this funding for years “do not reflect the Canada of today.”

The media should allow for a “multiplicity of voices across Canada” and be a “true reflection of Canadian demographics.” For that, smaller publications are essential, he said.

“I think the government should find a way to see where are the gaps, where are ordinary citizens not able to find the kind of information that enables them to be full participants of Canadian democracy.” That, he explained, will lead the way into the future.