Home » News » The different aspects of feminism: What is ignored and what isn’t

The different aspects of feminism: What is ignored and what isn’t

Women of colour sometimes find their concerns are lost when feminists or the advocates of multiculturalism purport to speak on their behalf, according to a scholar from the University of Quebec at Montreal.

Statistics Canada research also shows that visible minority women in Canada also get a university education at nearly twice the rate of non-minority women, and are slightly more prevalent in fields usually less studied by women like computer sciences and engineering.

However, when it comes to employment, the advantage of education is not always reflected. 68% of visible minority women are employed, compared to 79% for non-visible minority women. Income is also uneven, with a difference of nearly $4000 per year, although the gap shrinks with second and third-generation women.

Diahora Trahoré participated in a panel titled “Is feminism white” at the University of Ottawa Friday, where she spoke about the trend in Canada of ignoring the specific problems of minority women by only focusing on larger multicultural issues faced by both genders.

The tendency to ignore the specific problems of women of colour in favour of a kind of multicultural conformity was echoed by Dr. Ummni Khan, who organized the day-long talk at the University of Ottawa. Khan acknowledged that her perspective was mostly anglophone, but she remarked that problems such as the ones brought up by Trahoré are often dismissed across Canada. 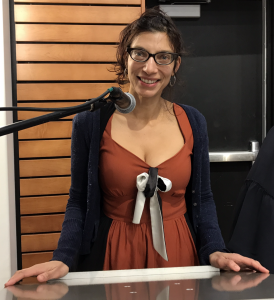 Dr. Ummni Khan, the join chair in Women’s Studies at Ottawa and Carleton University, who was responsible for organizing the event.

She offered the example of “reconciliation” with Indigenous peoples led by the federal government. She claimed the fact that Indigenous women experience violence more often and in more severe forms than non-Indigenous women is rarely mentioned.

She remarked that there was a defensiveness around racial issues in Canada, rooted in a kind of national pride. She said that “now people seem more entitled to say ‘Yeah, this is Canada, so take off that turban.’”

Khan also noted that this Canadian refusal to politicize racial or cultural issues was part of what encouraged her to organize the talk. “I had experiences with feminism that resembled more problems with racism and Islamophobia,” she said in her opening remark. In her view, specific issues faced by racialized women are often complex and overlapping.

Khan said that, while Canada is a diverse country, it still has problems with understanding specific issues faced by particular racialized groups. “Everyone agreed that diversity was good,” she said, “but they didn’t agree on exactly what it was.”