Yearning for nostalgia, authenticity at a midnight Pokémon launch 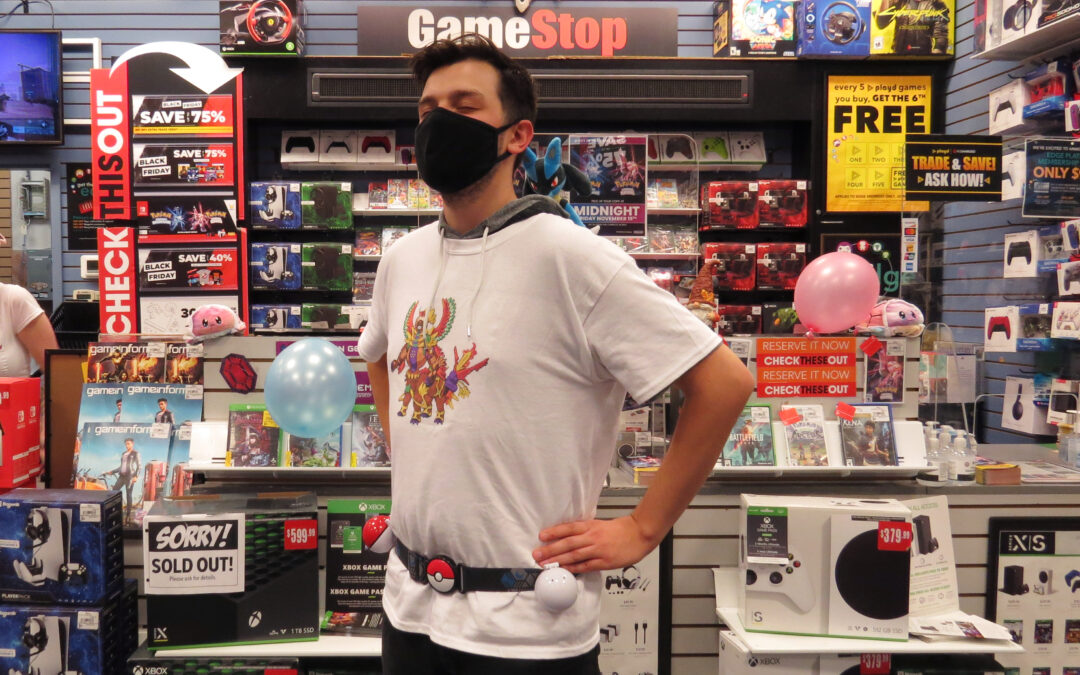 Ben Mungham is ready for the Pokémon launch at GameStop in Ottawa on Thursday night, sporting Pokéballs and a Lucario on his shoulder. Picture by Jaimie Nackan.

The air buzzed with excitement Thursday evening as the sound of Pokémon music greeted people at the door of GameStop inside the Billings Bridge Shopping Centre for the midnight launch of the video games Pokémon Brilliant Diamond and Pokémon Shining Pearl.

The original versions of these games were released 15 years ago back in 2006 for the handheld Nintendo DS console. This year also marks the 25 anniversary of the Pokémon franchise.

One attendee, Alexis Fee, sat just outside the store shuffling through a stack of Pokémon cards, each carefully wrapped in their own protective sleeve. Fee said that not only was Diamond their introduction to Pokémon, but it was also their first-ever video game, and they were looking forward to reliving it.

Diamond and Pearl were the first Pokémon games released for the Nintendo DS. The games utilized new features for the time, like Wi-Fi connection which allowed for online multiplayer gaming. This provided players with an easier and more accessible way to trade Pokémon with friends or battle with other players across the world.

The community aspect inherent to the games was seen again on launch night, Thursday, as people sat outside casually trading Pokémon cards with each other while waiting for midnight to strike.

Eager players circled the store, wearing their favourite Pokémon attire. Some highlights included a Pikachu inspired Christmas sweater, a Jigglypuff hat, and a Lugia plushie attached to one individual’s hood.

Amanda Tessier, the GameStop store manager, said it is usually older people who show more excitement for game releases like these.

“People are picking up Diamond and Pearl because they’re nostalgic. They’re like, ‘I played that game when I was five, when I was six, and I can’t wait to play it again with better graphics,’” Tessier said.

According to Michael Iantorno, a PhD candidate in communication studies at Concordia University, the emphasis on nostalgia is something that comes up a lot in Nintendo remakes.

Iantorno explores what happens to games after their original commercial lifespan in his research.

He drew on the similarities between the newer Pokémon games released on Thursday and the recent remaster of The Legend of Zelda: Link’s Awakening. “It had a very similar rhetoric around where it’s like an old game brought to new hardware, which is still authentic to the old, but it’s still gifted with new features and new graphics and things that set it apart from the old version,” Iantorno said.

Both games have a new “chibi” style of artwork, a style characterized by overexaggerated, short and cute figures, which Iantorno said may help to mimic the older sprite style artwork. These upgrades bring a fresh feel to the graphics without making it unrecognizable, which helps to retain the sentimental feel of the old 2D pixel art style.

Some fans place a high level of importance on preserving the look and feel of old games as new ones are released. After the 2019 release of Pokémon Sword and Pokémon Shield, fans were disappointed that old Pokémon were left out of these games, so they found ways to hack them in.

“That was really intriguing to me, because there was a sort of idea of what a Pokémon game should be. And since it didn’t abide by that idea, a lot of fans took it into their own hands,” Iantorno said.

According to Iantorno, while the remakes are not a one-to-one conversion, they act as something emblematic of the entire Pokémon series. “It takes the old experience of the original title, and then makes it match the experience of the newer Pokémon games and finds this authenticity, as a sort of pastiche.”

As Thursday night wore on, the line in front of the GameStop continued to grow. One of the first people there was a man with a Pokémon tattoo sleeve who brought along his young child who was carrying a Nintendo Switch Lite.

To kill time before the launch, the boy went into the store to play some Pokémon games. After catching a Bidoof inside the store, he named it GameStop and proudly showed it to Tessier.