In 2014, Beltrán had received a breast reduction, but the then-20-year-old journalist’s unhealed wounds reopened after she was prescribed improper medication, leaving her physically and emotionally scarred. Beltrán went public with her case, and a photo of her bare, scarred breasts was published brazenly across the front page of a major Colombian newspaper, El Espectador, in 2016. Later that year, the issue was brought to international attention by the documentary Colombia: Under the Knife by Al Jazeera.
“There is certainly a crisis in medical ethics.”
Lorena Beltrán 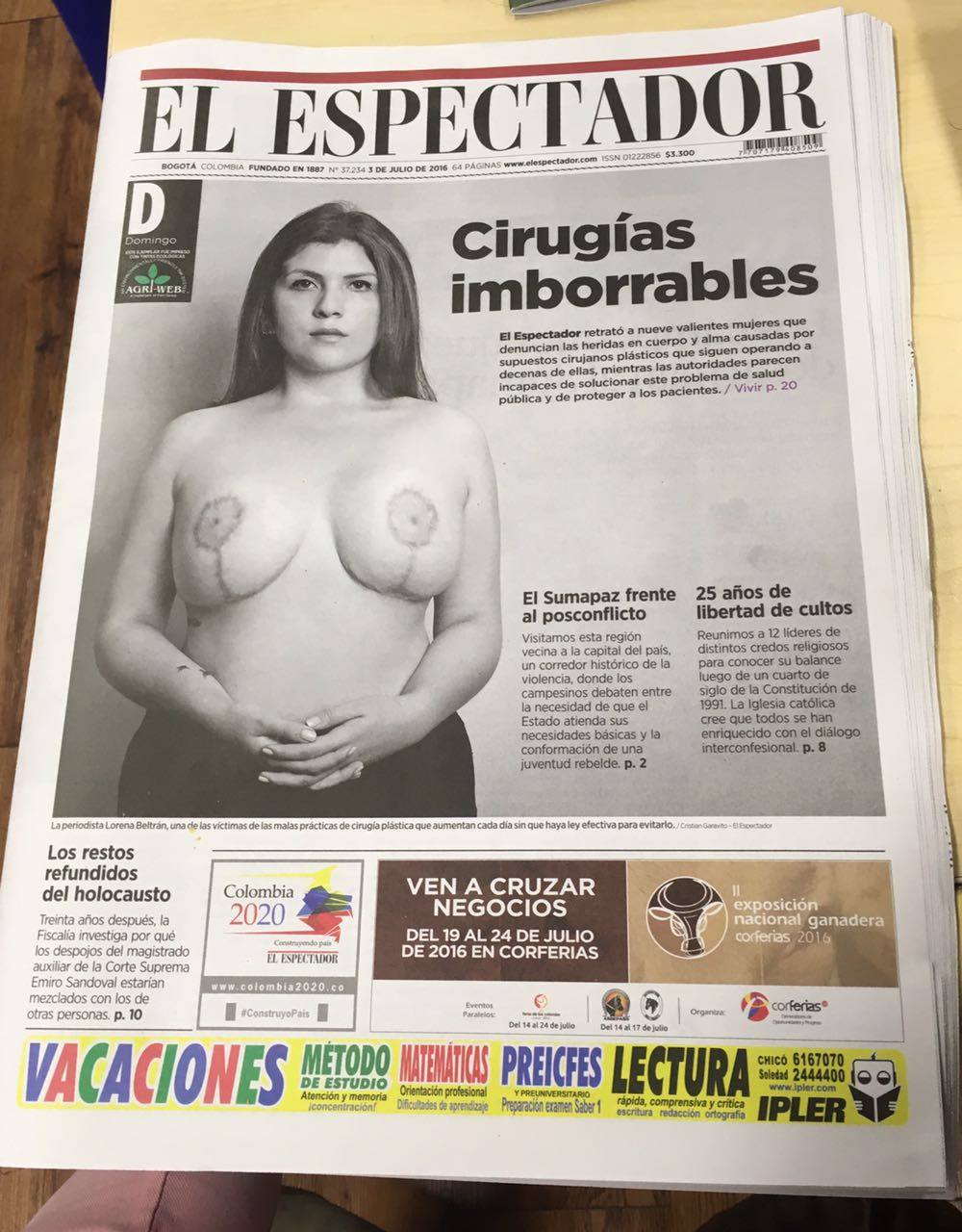 “While most of the procedures in Colombia are carried out by suitably knowledgeable and experienced surgical specialists, others are not,” Al Jazeera reported. “Such is the money to be made from performing aesthetic surgery that it’s attracted medical practitioners who haven’t necessarily achieved the relevant and required qualifications.”

“As a result,” said the broadcaster’s Latin America Investigates program, “patients — who can find it hard to distinguish between the validity of one set of professional diplomas and another — are being put at risk of horrible complications: disfigurement, disability and even in some cases, death.”

Beltrán has now become the face of plastic surgery activism. She started the campaign Cirugía Segura Ya (Safe Surgery Now), which raises awareness of malpractice and is lobbying the Colombian government to tighten regulations that would help shut down clandestine clinics. Beltrán and other victims of malpractice such as Paula Andrea Moreno and Liliana Fragozo, are also part of mutual support group on Whatsapp.

For Beltrán, there are three problems with plastic surgery in Colombia. For one thing, she argued, state departments such as the Ministry of Health are failing to exercise adequate control over the issuing of plastic surgery licences, are failing to properly inspect and shut down clandestine clinics, and are failing to successfully prosecute surgeons operating in blatantly unprofessional ways that threaten the safety of unsuspecting patients.

Second, said Beltrán, Colombia’s political leaders need to ratify legislation that would increase transparency and monitoring of the industry and prohibit anyone except properly certified plastic surgeons from performing invasive operations. And third, Beltrán insists there should be a national awareness and prevention campaign that advises women on best practices when it comes to finding a qualified surgeon operating in a safe, certified clinical setting. “I think there’s those three components, but there is definitely a crisis in medical ethics,” said Beltrán.

“The purpose of this law is to regulate the practice of aesthetic plastic surgery, aesthetic medicine and medical surgical specialties with formal competences in medical and surgical aesthetic procedures in Colombia; and establish other provisions related to procedures, supplies and medications applied to patients, their records, and responsibility of those who practice medicine.”

Bill to regulate plastic surgery
The bill would require plastic surgeons to have a specialization in plastic surgery, implement an insurance system to deal with medical complications, keep a public national registry of qualified surgeons and oversee the quality of materials such as implants and injectables used in cosmetic surgeries.

In December 2017, the bill passed its third reading and will soon face a final debate in the Colombian senate before it can be passed into law.

However, legislation regulating the industry has been proposed in the past without success. “A very strong lobby has been made, and it’s caused proposed bills to be filed and voted down multiple times,” said Beltrán. “I’m worried that Congress has other very important preoccupations such as the Peace Process. We say that we’re running against the clock.”

In the meantime, said Beltrán, it is important to run an awareness and prevention campaign. Her media appearances have prompted a public outcry over women’s horror stories, while government health ministries have run small campaigns warning about plastic surgery malpractice.

Beltrán said she would like to see an advisory system developed for women seeking plastic surgery that would steer them to qualified surgeons and licensed clinics. Currently, it can be difficult to check a surgeon’s or a clinic’s credentials. The plastic surgeon’s licence may not be reflective of their training, and to check if a clinic is licensed, a prospective patient needs to check the clinic number under the health department’s website, an imperfect degree of vetting that can also be a complicated and confusing online process.

“Think of your motives and always do it in safe conditions.”
Lorena Beltrán
“I have a clear objective: to make girls know that they don’t need surgery to love themselves.”
Liliana Fragozo
Body Positivity

While Beltrán campaigns for tighter regulations and greater awareness, Liliana Fragozo — the woman who suffered complications after an implant was put in backwards by the same doctor who operated on Beltrán — focuses on the underlying social issues driving patients toward cosmetic surgery. As a mother of three daughters, Fragozo now preaches a message of body positivity. “What message am I giving my daughters? That to be pretty and accept themselves they have to have surgery and fix what they don’t like? Or to accept themselves as they are because what is beautiful about them isn’t just their bodies?” asked Fragozo.

Fragozo recalled her youngest daughter — who was nine at the time — pleading with her mother not to get surgery. “This for me was psychological imprisonment. What are you exposing your family to? It’s not worth it,” she said. “It’s not worth it to risk your blessings, your family, your home and your emotional stability for unscrupulous people.”

“All these things I’ve lived through serve a purpose. I don’t want dead girls in the operating room. I don’t want women to feel defeated because someone calls them ugly or fat, or that they don’t deserve love because of how they look,” said Fragozo. “I have a clear objective: to make girls know that they don’t need surgery to love themselves.”