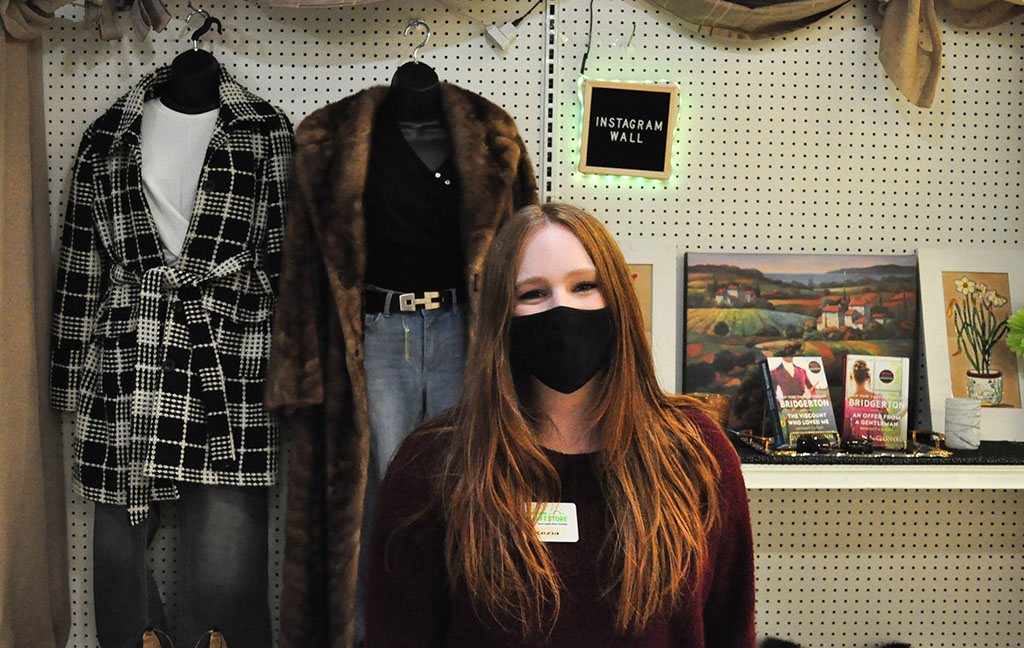 Are trendy thrifters a cause for concern or the future of fashion?

Kenzia Loucks, 17, stands in front of the Instagram wall that features the Mission Thrift Store in Orleans’s trendiest items. Loucks manages the Instagram account and social media for the Orleans store. Photo by Joy SpearChief-Morris.

When Taniel Campbell, 21, needs to decompress or find a bit of time for herself, she can be found getting lost among the aisles of clothes thrifting at the South Keys’ Value Village.

Campbell, a Carleton University student, discovered her love for thrifting two years ago after seeing curated thrift-store clothing was trending among Instagram influencers. Since moving to Ottawa this past May, she has become hooked on the fun.

According to the thredUP 2021 Resale Report, 33 million Americans bought second-hand for the first time in 2020 and 53 per cent of millennials and Gen Z shoppers said they expect to spend more on second-hand clothing within the next five years. The online second-hand retailer was launched in the United States in 2009 and since 2017 has released annual reports that track retail and consumer data.

Thrift Stores like Value Village and Mission Thrift Store have gained popularity as thrifting has become trendy among Gen Z and millennials concerned about shopping more environmentally sustainably on a budget. Yet, as thrifting becomes trendier, there is a debate among both shoppers and thrift shop managers over the impact this trend will have on low-income communities who rely on their local thrift store.

When Macklemore and Ryan Lewis’ “Thrift Shop” topped the Billboard charts in 2012, stealing your “grandpa’s style” suddenly became a popular trend with millennials, with the National Association of Resale Professionals reporting a spike in sales within the resale industry.

“You had to go to the thrift store and find some sort of crazy looking sweater to kind of pull off that look, and I just remember going with that goal, and finding a bunch of really awesome pieces that I still have a couple today,” Amy Benzie, 22, said. She recalls getting into thrifting when she was in grade nine in 2014, back when grandpa sweaters were a trending style with her peers.

The quality of clothing found at thrift stores has kept Benzie, a former graphic designer based in Lethbridge, Alta., thrifting for the last seven years.

“I find that it’s just better quality and cooler designs than what’s in stores. You can find some real hidden gems that no one else has and [it’s] better for the planet,” she said.

Campbell enjoys thrift shopping for the price value as well as the quality of clothing, which she finds lasts longer than anything else she could find in a regular store.

Racking up the prices and the problems

An article written by the Berkeley Economic Review found that, “the rising popularity of thrifting among more wealthy consumers,” such as younger generations or those living in more affluent communities, “reduces the already limited options available to low-income communities.”

Campbell, who is originally from Jamaica, thinks there might still be a taboo surrounding thrifting in some communities of colour, mentioning that she does not tell her mom that she thrifts and none of her friends who are people of colour are thrifters.

“It’s coming out of a poverty mindset,” she said. “You’re like, ‘Oh, why would I go back there?’ Because this thing is something that people with nothing… that’s what they do. So why are you doing that?”

Although Benzie understands that the gentrification of thrift stores is keeping clothing out of landfills by fast fashion shoppers, she worries about the consequences.

“Obviously, it’s taken a huge boom, like people with carts full of clothes, and it’s just kind of wasteful at some point, in my opinion,” she said. “But at what point are we racking up the prices, because people that don’t necessarily need to be getting cheaper clothes are thrifting.”

Benzie has noticed rising prices at Value Village. “With the boom in Tik Tok thrift shopping, everyone wants to do it. Value Village has increased their prices incredibly,” she said, preferring to shop more at Mission Thrift Store.

Jessica Vaillancourt, 36, is the owner of Bee You Creative Styles, a thrift store located in Carp, Ont. Vaillancourt sources 70 per cent of her inventory through consignment with existing clientele and the other 30 per cent through thrift stores like Value Village. In the last year, she has noticed a two to three times price increase, as well as changes to their retail strategy.

John Garfield Knight Jr., manager of the Mission Thrift Store in Orleans, Ont., said their store has recently dropped the prices on their clothing by five per cent.

“We are a thrift store, we are a non-profit, and the money we do generate goes elsewhere, Garfield Knight Jr. said. “But the same token, we don’t want to price ourselves to a point where only certain people can come, we want everybody.”

Despite these concerns, many thrift stores are welcoming younger shoppers with hopes of changing their perspectives on thrifting and second-hand clothes.

Since reopening after the provincial COVID-19 lockdowns, the Orleans Mission Thrift Store has been trying to engage with its new younger clientele.

Kenzia Loucks, 17, is a part-time staff and avid thrifter at the Orleans store but began as a volunteer the last two summers. Loucks started an Instagram account for the store to target younger shoppers on social media. She said she wanted to “show more of a fun side to the store.”

The Orleans store’s Instagram account currently has 105 followers, 60 per cent of which are females between the ages of 18 and 39.

Loucks has created an Instagram wall to display items she thinks will attract an audience online. “I’ll do clothes ensembles. Recently I’ve gotten into recreating celebrity photos, which has been fun,” Loucks said.

In Carp, Vaillancourt is also trying to change people’s perspectives on second-hand clothing through the way she curates her shop.

To walk up the stairs into Bee You Creative Styles is to walk into a thrift lover’s dream. Each room is carefully arranged to reflect the diversity of Vaillancourt’s shoppers. It aims to offer a little something for everyone, mixing vintage and designer finds with locally made items, books on sustainable fashion and those bang for your buck items.

“I think in this setting where it’s all second-hand, and from all different eras and styles, it’s an opportunity to get people excited about buying second-hand, and it’s no longer where everything is just thrown together all willy-nilly at the thrift store,” Vaillancourt said.

Garfield Knight Jr. is excited about how many younger people are coming to the store as both shoppers and resellers and believes the new trendiness of thrifting is benefitting the local community overall.

“Our mission here is to make money to better the world, and if I make $5 and a young person walks in here, who knows more about it and makes $25, my hope is they take that $25 and they buy other thrifting stuff,” he said. “So just continuously keeps more and more stuff out of the landfill.”

The focus of Vaillancourt’s business is full circle. Clothing she does not manage to sell, she donates to Savvy Seconds, a charity owned by Vera Jones in Kilburn, Ont. Savvy Seconds gives away clothing to those in need, including people escaping situations domestic violence, suffering from economic stresses or from disasters like tornadoes or fires.

Shopping at thrift stores out of necessity as a child with his mother is what first made Kamal Ismail, 21, a thrift shopper.

“We didn’t have a lot of money so, we would do a lot of shopping at places like Value Village,” said Ismail, who is originally from Oshawa, Ont. but lives and attends university in Toronto. “I found a lot of good things, like pretty expensive things, that were cheap.”

Ismail, who got his girlfriend into thrift shopping, was not surprised by the new trendiness of thrifting but has noticed that the activity has become a luxury for some younger shoppers. He wants these shoppers to be respectful of thrift stores and also encourages donating and keeping thrifting full circle.

“You never know what will catch someone’s eye.” 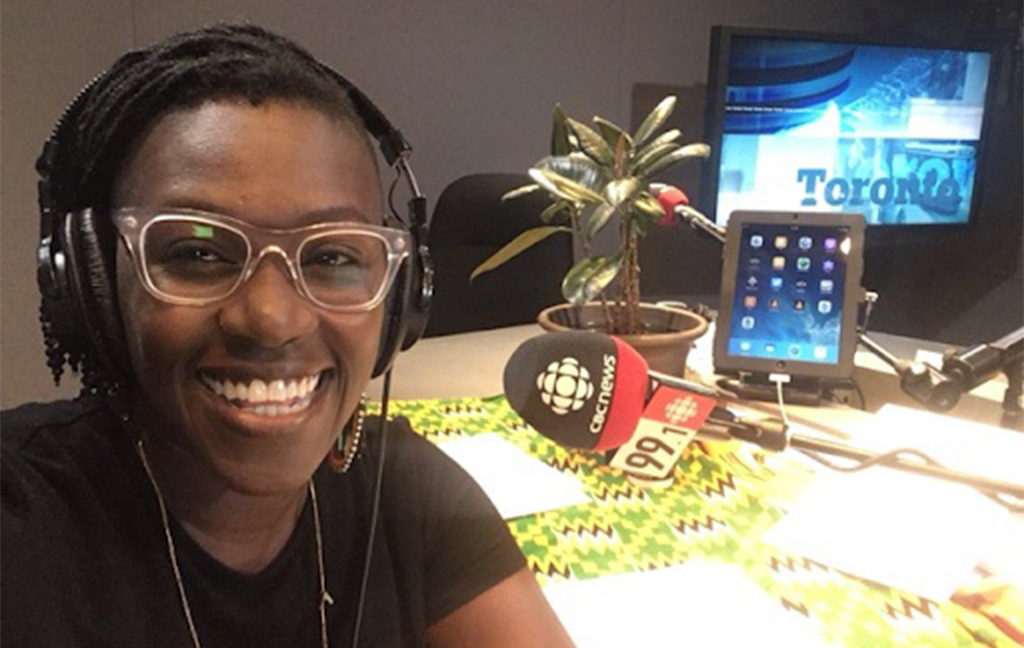 Nana aba Duncan, associate professor at Carleton University and founder of Media Girlfriends, says there needs to be a more welcoming environment for young journalists of colour in newsrooms. Photo curtesy of Nana aba Duncan.

New data from the Canadian Association of Journalists validates what journalists of colour have been saying in recent years – that Canada’s newsrooms are overwhelmingly white.

The association released the first-ever Canadian Newsroom Diversity Survey on Thursday, providing data on 3,873 journalists across 209 newsrooms across Canada.

“Almost half of all newsrooms exclusively employ white journalists,” said Zane Schwartz, who is a member of the association’s board of directors and survey lead.

“This gives us a snapshot for the first time in Canadian history of the race and gender of the people who are telling Canadian stories and reporting on what’s going on in local communities all across Canada.”

According to the report, representation of visible minorities is currently the highest among part-timers and interns. White journalists make up roughly 76 per cent of full-time staff and 53 per cent of interns.

For Raisa Patel, a national politics reporter for the Toronto Star, these statistics are not surprising.

“We’ve been discussing that racialized women and Indigenous women occupy a very different part of this industry than their white colleagues, and we’ve been speaking for many years about how representation in this industry is lacking,” Patel said.

Almost 80 per cent of the newsrooms surveyed reported having no journalists of colour in their top three leadership positions.

Nana aba Duncan, an associate professor at Carleton University’s School of Journalism and Communication and founder of the podcast production company Media Girlfriends, said there needs to be more of an emphasis on promoting the journalists of colour who are already in newsrooms to higher-level positions.

“Often when there is talk of increasing diversity at companies, people begin with filling lower-level positions,” Duncan said. “This is important, but our news organizations must recognize the leadership that already exists within their ranks and promote them as soon as they can.”

Patel said she believes the report will help others understand the issues at hand and help newsrooms take steps toward focusing on their hiring practices to recruit more journalists of colour.

“It all comes back to hiring at the end of the day, and who are the people that we are seeking out?” she said. “How are we seeking them out? Are we making sure that they feel comfortable and welcome in this industry?”

Duncan sees a welcoming environment as essential to retaining young journalists of colour in newsrooms.

“We must see that they are members of communities that need to be reflected in our news, and that what they have to offer is an expertise some of us will never have,” Duncan said.

According to Schwartz, the next step for the association involves collecting more data from more newsrooms. The professional organization plans to conduct the survey annually.

As for the future, Patel cautions newsroom managers from stopping the work of improving newsroom environments for journalists of colour.

“I would just really, really encourage anyone in a position of leadership in this industry to move away from that sense of complacency,” Patel said. “There is still so much work to do.”